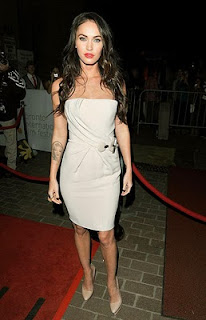 Okay, maybe it's just me.

In fact, it could really be just me. Most of the "gorgeous Hollywood stars" have very big heads.

I don't mean their heads are swollen with pride. I mean they have large craniums. I saw Farrah Fawcett in person once in the early 1990's when she was filming a movie in San Francisco.

Her head was huge and her body was tiny. I also saw Clint Eastwood at his "Hog's Breath Inn" restaurant in Carmel. Mr. Eastwood's head was way big for his tall skinny body, (in fact he had a huge forehead that never showed up in "Dirty Harry"). His big head did not keep my earrings from flying off when I first saw him and landing on the table next to ours, however.)

If you look at Megan Fox in this photo, notice that she has a normal sized head, but a tiny body. She has little toothpick legs along with her regular sized head.

I'm not picking on Megan in particular. She's beautiful. It's just that I can't help but wonder if big heads and tiny bodies photograph better than normal bodies and small heads. I have never seen a star who had a small head and a somewhat bigger body.

Another thing is that almost all of the Hollywood actors and actresses popular today have "Chicklet" teeth. They have bright white. very big, completely perfect teeth. They don't look like normal teeth at all, and they look too big for the people's mouths.

So if you have a kid with a big head and a little body and huge bright white teeth, get them in drama class and find them an agent. You'll probably get money out of it if you act as the kid's manager. Then you can pay for your other pinhead kids private school with all the money you make.
Posted by Linda Medrano at 6:55 PM