Is There A Statute of Limitations That Applies Here? 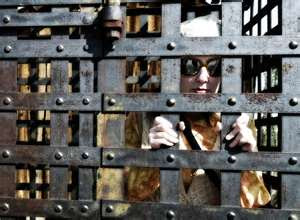 This is my next to last post on the "30 Days of Writing" challenge hosted by Nicky and Mike of "We Work For Cheese".  It's been fun, but now I've decided to do a little serious confessing to a crime I committed a few years ago.

Today's prompt is "Outside the Rules", but perhaps this would be more under the heading of "Outside the Law".

I don't know what made me do it.

I've asked myself over and over "What were you thinking?"  I guess the answer was I wasn't thinking.

My husband and I were awaiting our new court date, since Ron, (the landlord from hell), had filed an appeal on the first court's decision that was in our favor.

One evening, we may or may not have had a couple of margaritas.  Then we may or may not have discussed what a butt head Ron was for putting us through all this court stuff to get our security and cleaning deposit back from him. We were upset and annoyed.  Sometimes those emotions are worse after a little tequila.  After having a little more tequila, I had a brain storm. That's always a bit scary.

I suggested that we vandalize the house we had rented from Ron.  At first my husband was not at all sold on my idea.  But I did my best "Eve with the apple" routine on him and he finally came around to my way of thinking.  It was nearly 10 PM and late enough I thought we could take a run over to Ron's house and nobody would be the wiser.  I suggested that we both dress in black and wear black watch caps to disguise ourselves a bit.  (Of course, we did have the bright red Miata, but that was something I really didn't worry about.)

On the way to the house, I had my husband stop at a 7-11 and I bought a dozen eggs.   Giggling to ourselves, we pulled the car up in front of Ron's house and saw that there was nobody looking out any windows in the nearby houses.  Now, keep in mind, we had lived in this house for 5 years so neighbors might recognize us and our car should they peek out a window.

We quietly sneaked up the front stairs and violently tossed the eggs at the house.  We were snorting with barely controlled laughter.  All at once, we saw headlights approaching and we froze in our tracks.  The car slowed down in front of a house two doors away.  We both lay flat on our bellies and waited.  We heard someone get out of the car and disappear into the night.

By this time, it wasn't so fun anymore.  We were terrified. We left the remaining eggs on the front landing and quietly got into our car and raced home.  For numerous days we waited for the police to show up and arrest us.  (I was convinced the cops would be able to track our fingerprints on the egg shells and the egg carton.)  The guilt I felt was incredible.  And I made Alex a nervous wreck by constantly talking about the possible charges that I knew would be coming.

I shoplifted a can of Aqua Net hairspray when I was 13.  That was terrifying and I never did such a thing again.  This was worse.

Days passed and nothing happened.  Weeks passed.  No visits from the police.  No calls from Ron accusing us of egging his house.  I still wasn't sure we were out of the woods.

We went to the 2nd court date and I felt so guilty I didn't even care if we lost our security deposit.  I just didn't want to be exposed as a vandal.

Let me tell you folks, crime doesn't pay.  Or sometimes it might.  But in this case, it really wasn't worth it. (Ron, if you are reading this, "You had it coming, Sucker!")
Posted by Linda Medrano at 9:55 PM