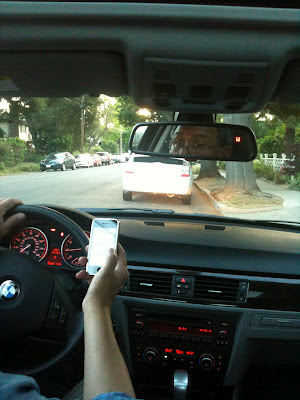 This is my husband Alex.

Before we go someplace, there are a lot of things that have to be done.  Alex has his walkie talkies, his GPS, his Blue Tooth, his compass, his cell phone, and his emergency medical kit.  We also carry blankets, detailed maps of Northern California and Southern California, 2 gallons of water, a knife, road flares, his clean underwear, a flashlight, power bars, batteries, water-proof matches, a solar powered radio, and a small propane stove with a pan.  This is for a trip to go five blocks to the market.

The GPS tells us where to turn.  It's five blocks away, Alex.  We could have walked it very safely and easily.  The only reason we are taking the car is so we don't have to carry 10 bags of groceries home from the store.

I know how to go five blocks and not get lost, not get cold enough to need a blanket, and not to die of thirst.  It's not likely Alex is going to change underwear either.    We carry this junk in all three cars so that we are always prepared.

Alex does not like to leave things to chance.  One wrong turn can really be a problem.  Perhaps we'll get lost somewhere and have to kill a bear and cook it in that little pan on the propane stove.  Alameda has no bears.  We do have raccoons, turtles, rats, wild turkeys, and squirrels though.  I guess Alex could kill one of those little animals with his knife and then we could cook that.  (Actually, I'd rather just nibble on the fruit hanging from the trees, but that's me.)

It seems like this would be a very safe way to travel.  Unfortunately, that's not the case.  Alex perhaps has the worst sense of direction of anyone I know.  Or, he's just so caught up in the gadgetry that he gets lost all the time.  He frequently tells me we are taking a "Navajo shortcut".  These Navajo shortcuts without fail tack on an extra 90 minutes to any trip we take.

People give Alex detailed directions to places and he acts like he's paying attention, but he's not.  He just makes the appropriate noises and tunes the people out.

I sometimes suggest that pulling in at a service station and asking directions might be a grand idea.  Alex treats this suggestion with exasperation.  It's not going to happen.  We are going to use the GPS, the maps, the compass, and drink some of that damn water until we figure it out.  We will park and take deep breaths to get our bearings before continuing on.

I never get lost.  I hate gadgets.
Posted by Linda Medrano at 9:02 AM