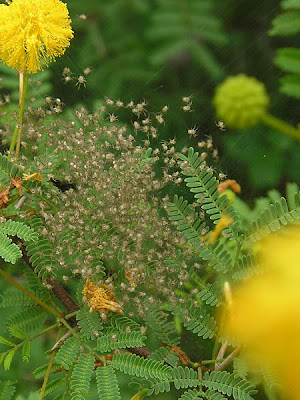 I was traumatized by a spider when I was about eight years old.

My mother left me home alone for about ten minutes while she picked my little sister up from school.  I spent over a year in bed after I was diagnosed with Rheumatic Fever when I that age.  I was not supposed to walk and I very seldom left my bed.

Before you think "oh that was so sad", it really wasn't.  I got to read to my heart's content.  I had a home teacher.  And I was seriously catered to because I was sick.  My parents carried me to the bathroom, gave me bed baths and brought all my meals to me on trays.  It was not a bad way to spend a year and a half.  It even gave me an idea that I might like to become an invalid wife one day, but that's another story.

My mother had no sooner left the house until I put down my book and thought about taking a little nap.  I closed my eyes and fell asleep for about 5 minutes and I felt something on my face.  I opened my eyes and there was a spider hanging from a long skinny thread of silk almost touching my nose.  I screamed bloody murder and covered my head with the sheet.  By the time my mom got back with my sister, I was in hysterics.  To make matters worse, the big black spider had completely disappeared.  I knew he or she was someplace hiding and would come out after the lights were off and "get" me.

Mom letting me read "Charlottes's Web" did nothing to reduce my horror of those eight-legged freaks.  In fact, over the years, my phobia increased.  Numerous times I telephoned my husband at work and told him he had to come home because there was a spider in the bedroom.  I could not walk into a room with a spider no matter what.  I would have left my baby in his crib crying hour after hour if I had seen a spider in the room.  If my husband was not able to come home, I would call a neighbor to come and help me.  (Help me?  No, actually, I just wanted that spider dead but I could not get close enough to one to kill it.)  When nobody was available at all, I would resort to hair spray, perfume, spray starch, furniture polish and anything else I could spray across the room at the damn thing.   I found that none of those things actually killed spiders, but they did smell pretty good after being sprayed and they even looked shiny.  You see,while couldn't walk into a room with a spider, I couldn't walk away from a room with a spider either.  (I knew they would just hide and then bite me later.)  (Thank God for long telephone cords.)

This irrational terror of mine continued until after my marriage to Alex.  We were in Arizona visiting his parents when I saw a huge "wolf spider" on the wall in the hallway outside of the guest bedroom.  I shrieked bloody murder and Alex came running to see if I was hurt.  I pointed to the spider and he said "Oh.  What do you want me to do?".  I replied through clenched teeth that I wanted that spider dead.  He left me while he went to look for execution materials.  He was gone about a half an hour.  When he came back with a magazine, a sponge, a bottle of cleanser, he asked me if I was sure I wanted it dead.  Of course I was sure..  With a loud slam, the spider was smeared all over the hallway wall.  Alex shook his head as he sadly cleaned up the spider's remains.

Alex's parents were horrified when I told them what had happened.  That spider (name of Humphrey) had been with them for about 15 years.  It even moved with them when they bought a new house.  All three sets (Alex, his mom, and his dad) of black eyes gazed mournfully at me as they asked for a description of the spider.  We had indeed killed their spider friend Humphrey.  I felt terrible.

Native Americans don't kill spiders.  But I learned something that day.  I had forced Alex to take a life and he was very upset over it.  Hell, by this time, I was upset over it and feeling really bad about poor Humphrey.  Shoot, he may have even had a family.  And he did have kind of nice gentle eyes actually.

That was the last spider that ever died because of me.  Now I use a clear plastic cup, slide a postcard across to trap the critter and escort it gently out into the garden.  Spiders love it there.  Lots of food, water, and a safe haven to live out their little spider lives.  I even got to see a spider "hatch" when about 300 gorgeous little golden babies tossed out their silk ropes and  flew off to do whatever it is that spiders do.  They were about the size the head of a pin.

It's good to not be terrified of them any more.  But I'm still not inviting them in for a sleep over even if it's raining.
Posted by Linda Medrano at 3:45 AM