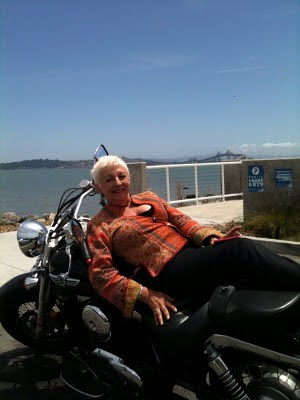 This was taken today outside San Quentin Prison. Nice view from there, huh?

Where did I find the chopper? Well, the nicest young man had it. Yeah, I'm friendly like that. So was he!

Honey and Harry just looked on and shook their respective heads.

First we took them to Pt. Isabel in Richmond where there were hundreds if not thousands of dogs just walking along off leash enjoying the sunshine.

Some of those dogs were very small, and very well groomed. Harry and Honey find dogs like that suspect. I was curious why Alex would want to take our badly behaved and non-social gruesome twosome to such a place. The best thing I can say about Pt. Isabel is that we didn't even see one murderer and it was almost noon so I am sure we were just lucky today.

After about 15 minutes, Alex was tired of being dragged all over the place by the lunging snarling 170 pounds of canines trying to avoid the well behaved dogs, so we hit the road. 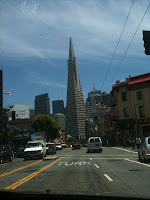 I took photos of San Quentin, but it is a very depressing place so I'm not posting them. I also took photos of the Transamerica Pyramid in SF but I'm sure you all have seen it. Still, here's my shot of it! I did take a quick look to see if I could see any famous criminals, Scott Peterson and maybe Charles Manson, but I didn't see them. (No the guy with the motorcycle did not have on an orange jumpsuit.)

We also drove down Lombard Street, the crookedest street in the world. Wow! That is a trip! Make sure you have good breaks for this one boys and girls! 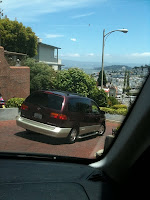 It is so steep and so crooked that it almost makes you dizzy. And crowded! Tourists with cameras are everywhere walking and in cars. I think we may end up on the front page of some foreign newspaper. Harry and Honey too! It's nice to be famous, huh?


We also drove over the Golden Gate Bridge but Honey slept through that. Harry looked pretty unimpressed. Still, I think it's cool! I used to walk to the middle of the bridge every year during SF Fleet Week. That was when my son, and when my husband were on carriers! I love Fleet Week. But then I love sailors! 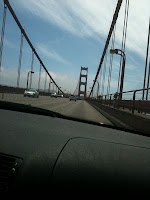 Honey did have a fat cop start toward her out the open back window on his motorcycle then think better of it and back away. Good call, Officer.

We drove around the City for an hour and the traffic was horrendous so we opted to come back to Alameda where things are safe and sane. Plus, we don't want to overdo this vacation thing all in one day.
Posted by Linda Medrano at 4:36 PM