Searching For Jimmy Hoffa - The Summer of 1976 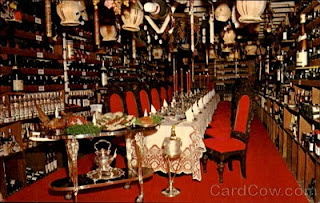 This is a photo of the Blue Fox restaurant in San Francisco.

I ate there in the wine cellar room when I was 30 years old. I was married to the Manager of Transportation for Chevron at the time, and I think one of the major railroads hosted the evening.

I had been searching for Jimmy Hoffa since the first of June with no luck what so ever. I went to the docks, the piers, and the basements of a lot of old buildings in San Francisco. I even went to Chevron's Richmond, CA refinery to take a look see. Nothing even vaguely suggesting Jimmy's bones was to be found.

Now Jimmy Hoffa was last seen at a restaurant called the "Red Fox" near Detroit, in an area located in "Oakland County". Fine, are you with me now? Red Fox, Blue Fox, San Francisco, Oakland. Coincidence, I think not. I did sneak into the kitchen at the Blue Fox at one point and tried to question a busboy, but he didn't speak English.

I returned to the Blue Fox a couple of times and pretended I wanted to look over the facilities for a party I was hosting. They were very pleasant, but refused to let me go into the areas where something (like Jimmy) could be hidden. The Blue Fox closed quite a few years ago. I lurked around the area for all of the summer. I just knew something would come up and point me in the right direction but it never did.

Jimmy Hoffa was a big Union guy. I guess he was kind of a crook too. Still, it just seems wrong that nobody ever found him. My Dad was in the Police Officer's Union in San Francisco. He never crossed a picket line, until he died. The gravediggers were on strike so that one time, he did cross. My sister was pissed at the Union guys with their signs. I thought it was funny.
Posted by Linda Medrano at 3:41 PM