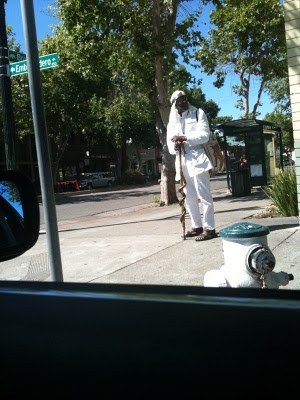 This is a photo of a guy who was standing on the corner in Oakland when we were coming home. He was so resplendent, I had to take his photo!

The man was even wearing a crown, so I guess he could be royalty. Harry and Honey were looking at him in amazement too! (Sometimes they can be so provincial!)

Alex said he thought the guy was a pimp. Excuse me? No pimps I know dress like that!

The man did not appreciate his photo being taken, but he did not want to walk toward the car with the slathering beast, or Harry and Honey either.

We went on vacation again today. (This vacation business is tiring me out.) We drove to Princeton By The Sea and had a wonderful little lunch in an outdoor cafe. The Mexican owner liked me so he brought me a plate of crab legs on rice with a mango salad on top of our lunch. Here is a picture of what we had to eat. Oh, and there's also a picture of my arm too. That Alex! What an eye for photography! Actually, in this photo it looks like I have an extra arm 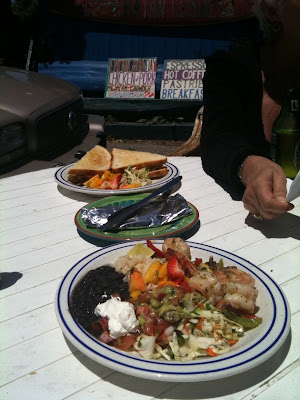 but that is not the case. What that piece of skin is, I'm not sure. But I know for sure it is not an extra arm.

I took photos of trees we passed, and of 18 wheeler trucks but thought you all have seen those many times yourselves so why would you be interested in seeing the ones I captured. I also took a photo of the Coliseum (where the Oakland Raiders and Oakland A's play) but thought that might bore you as well.

The food at this little outdoor dining establishment did not bore me. It was superb!

After lunch, Alex took the dogs over toward the water but I went to the bar next door for a drink. Lots of heavily tattooed ladies and one homeless looking guy. One of the ladies liked me and I liked her too. They were funny gals! The one who liked me wanted Honey to come in and have a margarita with her. It sounded like a good idea to me, but we had other places to go and see.

Here's a picture of Honey hiking on a trail near the ocean. She looks cute! 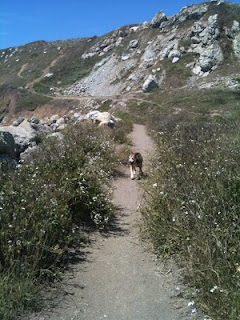 Honey does not walk very far because of her joint pain, but she does love to get out there and sniff! We told Harry and Honey we were taking them to Hawaii today on vacation, but Honey didn't believe it for a minute.

Harry kept looking for hula girls to sniff. When he finally got down to the beach, Harry got hit by a wave and ran for his life. He pulled himself out of his collar and took off up the side of a cliff. Alex and I had to chase him down. He's a sensitive guy. 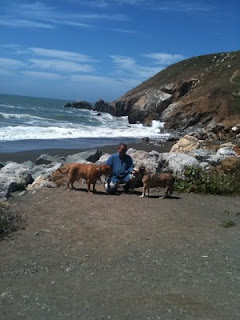 Here is a photo of Alex and Honey and Harry at the beach. We all had a fun day of it. And please notice, when I take photos I don't cut off heads or make anyone with 2 arms look like they have 3 arms.

Even the royalty pimp obviously has two arms, two legs and a curly cane. I thought his sandals were a nice touch.
Posted by Linda Medrano at 5:11 PM