Isn't it funny that when someone says "outfit" it's probably a woman. I don't think I've heard many men saying "I need a new outfit for the meeting", or the party, or the wedding. We women know exactly what we mean when we call something an outfit.

I'm not sure women call male clothing "outfits" either. I don't remember ever telling my husband, "Honey, go put on a different outfit" but I do tell him "That shirt has pizza sauce on it. Go change."

I'm including two photos today. One is of me in an outfit. The other is of a swimsuit model wearing a hat that would complete my outfit. 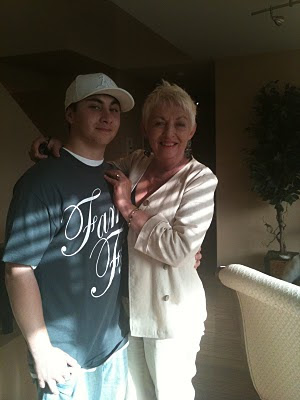 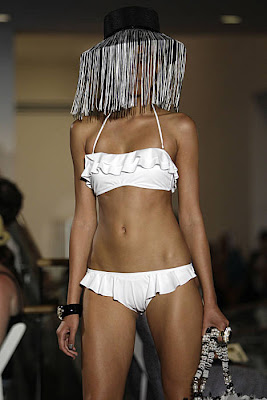 Posted by Linda Medrano at 2:20 PM No comments:

The Ghost of Tijuana Past

In the late 1980's before Alex and I were married, he was stationed in San Diego at NAS Miramar. I used to fly down to see him on weekends once in a while.

One weekend, we decided to go over into Tijuana since I had never been. We drove to the border, parked and walked across. It was a beautiful sunny day as I recall in late March. There were tons of taxi's ready to take us to the downtown area, so we got in one and arrived at Avenida Revolución in the late morning.

The street was packed, mostly with tourists, but there were also many vendors, panhandlers, and people offering you "two for one" cards for drinks in the local clubs and restaurants. Since it was almost noon, (perfect time), we decided to have our "two for one" margaritas to get us in the mood for the day, and then have lunch.

There were so many bright colors in Tijuana it made me wonder if the sunlight was somehow diffused differently there. So much noise and music! I felt a little dizzy from the surroundings, or maybe from the margaritas before noon. We wandered and gazed and shopped and debated if we wanted our photo taken on a burro. It was a fun day. I bought about 20 pairs of silver earrings from tiny Indian women showing their wares on brightly colored woven blankets.

It was expected that you bargain, so we did, but it was all in good humor and everybody walked away happy. The streets were filled with servicemen, families, college students, and hustling Mexican vendors offering you everything from watches to transvestite club show tickets.

We did go into a club (not the transvestite one) where they were playing really great music and we drank "two for one" margaritas and danced for a couple of hours. The club was packed and very lively. By late afternoon, we were both "Tijuana'ed out" so we made the trek back to the border.

For the next 3 or 4 years, we made this trip at least once a year. It was fun, cheap, simple and entertaining. We got to know some of the people who lived there and found out about their lives while sharing some of our lives' details with them.

I had heard that Tijuana was a dangerous place and I am sure it could have been, but I didn't see it that way. During subsequent trips, we explored a little of the nightlife and found it a little "wilder" than we have in the San Diego area, but not by much.

We had a friend with us one time and he drank too much and went outside to clear his head. When we realized he had gone out, we followed and found him propped against a light post with 4 young Mexican guys around him. They took off when we approached though so no harm done.

Today, I doubt I would take a trip to Tijuana unless I had to. Violence, drugs, and thugs have changed the place from what I remember so vividly. The last 20 years have not been kind to Tijuana. I remember the charm it once had for me and it makes me feel sad to know it won't be that place again.

There was a beauty in the squalor, in the noise, the people, the boisterous tourists, the cheap goods, the music and a rhythm to life that I fear is gone for good. Or maybe it's me who has changed.
Posted by Linda Medrano at 3:35 PM No comments: 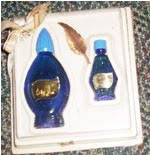 I started off my affair with perfumes when I was about 11 and I found and loved "Evening In Paris" perfume.

It was sold at Woolworths and very reasonably priced, as well it should be. I thought it to be the height of glamor. It came in a little blue bottle and had a fragrance something like bubble gum mixed with a little cherry pop. Or maybe it smelled a little like the color "blue". Perfect!

Of course, at 11, I was still more boy than girl, so I didn't use it often, only on those rare occasions when I would actually be forced to bathe and put on clean clothes. I spent my days climbing trees, and waving a truckers to see if they would honk those wonderful "ooga ooga" horns at me. Some did.

I also roller skated with a friend going around the block and down the slopes from dawn till dusk. We didn't have roller blades or anything fancy in those days, just skates with a skate key. It was wonderful.

I wore the same pair of navy blue flowered capri pants every day along with a red pull over hooded sweatshirt. The hood was a wonderful invention because I never had to comb my hair. I never washed my uniform, because I wore it day and night, and even slept in the sweatshirt most of the time.

My mother would chastise me because other girls in the area were starting to "fix up". I really thought she had lost her mind. Why would I "fix up" to climb trees and roller skate, and wave frantically at truckers in 18 wheelers?

On rare occasions after a bath, I would dab a little Evening in Paris behind my ears and feel a slight tang of femininity. Well, maybe I just felt clean, but who remembers!

By the time I was 14, I had somewhat to my surprise turned into a girl. I threw out the red sweatshirt and flowered pants and never looked back. Because of my newly acquired sophistication, I realized that I needed a new more mature fragrance. And perhaps even one that was not sold at the dime store. 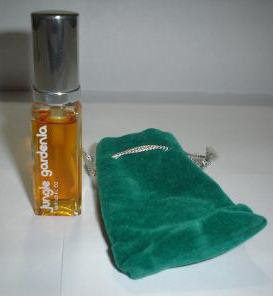 I saw an ad for something called Jungle Gardenia. That sounded pretty darned exotic and sophisticated to me! I started saving every dime of babysitting money I could lay my hands on, as well as charging my mother for chores, and before too long, I was able to purchase my bottle of Jungle Gardenia perfume!

I couldn't wait to try it out and see if it had any particular reaction from people, (particularly male persons) because by this time I had turned what my mother called "boy crazy".

I got in the car with my mother and opened the package. I opened the bottle and started dabbing the stuff on my wrists and behind my ear lobes. My mom started gagging! She said "Put that away! It's making me sick."

Charming teen that I was I started putting on more of course! Mom reached over and tried to grab the bottle. Uh, not a good idea. It spilled all over the seat upholstery and the floor. Now, quite frankly, a little Jungle Gardenia might have been a great idea, but a bottle of it spilled in the car was not.

I was furious at my mother, but also getting strangely nauseated from the overwhelming scent of gardenias. She drove home in stony silence with the window rolled down which she never did because she didn't want her hair to blow. I took a little solace in the knowledge that she would live with that fragrance for as long as she had the car. But, I never bought another bottle of the stuff. It was kind of gross.
Posted by Linda Medrano at 2:46 PM No comments:

Did You Ever Have One Of Those Days? 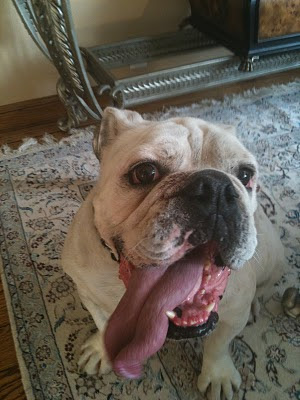 This is Winston Bubba. He looks a little tired and out of sorts. I have been feeling that way all day.

Winnie belongs to my daughter and her family. They got him when he was just a pup. He's a good boy but very high strung. I'm a little high strung too. 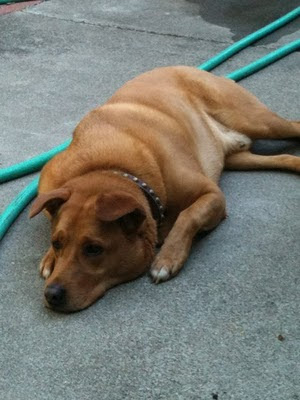 Harry is nothing like Winston. Harry is not particularly affectionate. Neither am I. It works well for our relationship. Also, Harry does not let his tongue hang out like that because he thinks it's vulgar. I don't do it either for the same reason.

Harry is also kind of moody. I think he looks depressed in this photo. Maybe that's more what I'm feeling.

I think I should go out in the yard and lay on a hose. Maybe it would help to lift my spirits! I'm not sure that worked for Harry though. He's still out there.
Posted by Linda Medrano at 5:49 PM No comments:

When I Was Young And Wild And More Mexican 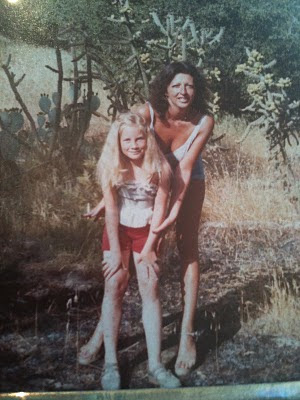 My children asked me "How did you have two American kids like us?" Excuse me, Chico! I was born in San Francisco.

When I was young and wild and more Mexican I had natural black hair and dark skin. I also held cigarettes in my hand posing for photos even with my children.

When I was young and wild and more Mexican I was married to a cowboy. This photo is taken at what used to be "our cattle ranch", 2000 acres of it. (I hated it there.)

When I was young and wild and more Mexican, I drank tequila straight from the bottle. When I drank tequila, my temper would get very bad but I didn't care.

When I was young and wild and more Mexican, I divorced the cowboy and hooked up with another man, but not in that order.

I sometimes miss the days when I was young and wild and more Mexican.
Posted by Linda Medrano at 5:34 PM No comments: