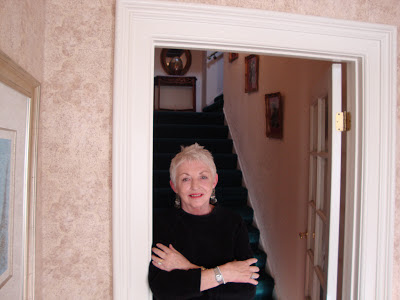 I don't understand this fascination with Zombies.  They are dead people and they are ugly.  What is the deal?

Okay, Vampires, I get.  They are kind of sexy with all that neck-sucking business.  Werewolves?  Not so much.  I love dogs and I love wolves, but I don't want to date one if you know what I mean.

My husband, Alex, is a Zombie fanatic.  He loves "The Walking Dead" and even reads books about Zombie wars.  I don't get it.

In the old days, I think in Haiti, they had zombie priests or something in voodoo.  I never really understood that either.  Either you are dead or you are alive.  I don't buy into the idea that it's a half and half thing.  My husband tells me I'm missing a lot.  For example, Zombies can only move in one direction (forward) and they cannot swim.  Why this is important for me to know, I cannot tell you.  But Alex insists it's worthwhile information.

Alex also listens to a lot of Disco music.  I never even acknowledged Disco when it was happening.  He insists on playing "Saturday Night Fever" songs when he cleans up the kitchen.  His radio is always playing something like Gloria Gaynor or Sly and the Family Stone.

I like classical music and country music and rock and roll and rap and blues, and hip hop.  Disco makes me shake, but not in a good way.  I find Disco as annoying as Zombies.

I don't eat KFC either.  That is so not chicken.  But if Alex is hungry, he will go by KFC.  Maybe he likes seeing the Zombies there while he listens to Disco music on his iPod.

I really don't know any more.
Posted by Linda Medrano at 3:28 PM 70 comments: