It All Started Early This Afternoon 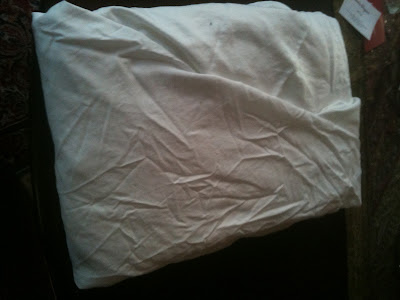 This sheet looks like it had an unfortunate encounter with red or pink dye.  I assure you it did not.  The room is red and for some reason, it reflected the color on the white sheet. Part of the problem might be that the sheet is wrinkled, but I'm not tripping on that part just yet.  Ironing a poorly folded sheet is just not that important, now is it?

Let me back up.  As you may know, Nicky, the glorious jewel of the blogging world, is coming to visit me next week.  In preparation for her visit, I have done a few things to make Nicky feel good about coming to visit.  I have put on fresh sheets on the bed in her room, ordered the flowers, cleared out drawers for her use and emptied the "guest bedroom" closet.  Further, I have cleaned the bathroom with an old toothbrush to be sure that she and her darling son Max will have pristine surroundings.

I've gotten some fun toys for Max to play with and gotten Nicky some nice bath and beaut;y stuff (not that she needs any the beauty part), and forbade Harry to lie on their bed until after the visit.

I even cleaned up my linen closet.  Well, sort of.  The problem is those frigging fitted sheets.  I have never been able to figure out how in the hell to fold a stupid fitted sheet.

Never mind.  Since Mama never taught me, today there is another answer.  I went on the Internet and was amazed at the videos available on just this subject.  I watched about ten of them and then thought, "Hey!  I've got this!".  Little did I know that after 3 hours of trying my damnedest I could not make the sheets look like they did in the videos.   My one hope was that Alex (my brainiac husband) would come home, watch the video and fold the sheets correctly.  This man is a rocket scientist.  He's a rock star in his field.  He is a stud!

Unfortunately, the sheet I photographed is the one fitted sheet I folded and it's the best one of the bunch.  Alex attempted to follow the directions and then just rolled the frigging sheet up and said "There!  That looks fine!"  Alex is a total idiot!

I had so wanted to impress Nicky with my home-making skills.  I had so wanted to have Nicky love us and want to live with us as my "sister wife".  Alex has no idea how his half-assed non-effort has just made those things next to impossible.  I am distraught beyond words.


Posted by Linda Medrano at 7:59 PM No comments: 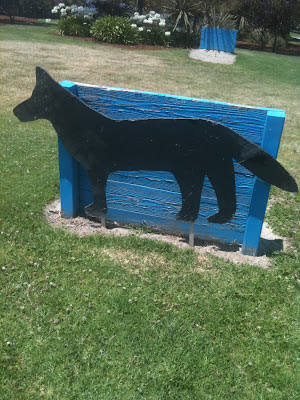 I watch too much news.

There was a story last week about a young guy in Florida who got in trouble with an alligator and nearly lost his life.  In the end, he did lose a good portion of his right arm.

There was a story of a guy off the coast of Perth, Western Australia last week who got killed by a shark.  I think the news story went so far as to say he had been bitten in half.  They (the news people, not the sharks), are always so graphic!

I'm going to tell you another story from last week that didn't make the newspapers, but perhaps it should have.  I'm going to call my story "Goose Gets Gotten By Pit Bull And Lives To Tell the Tale".

We take our dogs to Coast Guard Island a lot.  There's a lot of land over there where they can run off leash and both Harry and Zoe love the place.

Harry especially loves that there is a very large goose population on the island.  The Coasties mainly hate the geese because they poop everywhere and are generally a pretty annoying bird.  They have tried putting up fake dogs to deter the birds, but as likely as not, we see the fake dogs knocked off their posts and shat upon by the geese.  Talk about adding insult to injury!

Harry is a big dog but he's getting a little older now.  When we drive on to the base, he sees the huge numbers of geese sitting around just making goosey noises, he starts to hyperventiliate.  We let Harry out of the car and he runs at his top speed toward the flock.  The geese scream and run and fly off into the Bay.  Harry is very proud of the reaction the geese have to him.

We generally don't let Zoe out of the car until after Harry is well on his way to driving off the geese.  The reason for this is that Zoe's nickname to us is "Zoe Zoe A Go Go" because she is the fasted dog I have ever seen.  Zoe goes from zero to sixty in about 3.2 seconds.  She also flies through the air like a Russian ballerina.  Zoe is about 50 pounds of pure muscle and loves to chase!

We pulled up to the usual spot yesterday and there were about 200 geese there hanging out on the lawn.  Alex opened the car door and Harry and Zoe jumped out at the same time.  This was a worry.  The geese were running for their lives, but one guy just wasn't that fast!  Zoe brought him down and she was laying on top of him.  Now there are not little geese but huge geese.  Alex was running toward her as fast as he could run, (which compared to Zoe, or Harry for that matter, he's pretty slow).  He yelled at Zoe, "Come here!"  And she slowly got up.  My heart was in my throat!

As Zoe slowly ambled toward Alex, the goose shook his head and got up!  He ran toward the water and got into flight!  She didn't hurt him.  She flattened him under her, but didn't bite him.  He was fine!  Now this is a good news story.

Today we went back to Coast Guard Island with the dogs.  My favorite handsome security guard was on duty.  Alex asked him, "Officer, what should we do if one of our dogs accidentally kills a goose?"  The cop responded "One of our geese?"  Alex said "Yes."  The security guard took a moment and said the following:

"Just stick it in a bag, but don't tell anybody."  We rode off snorting with laughter.