With Love, To Nicky Eff and Max 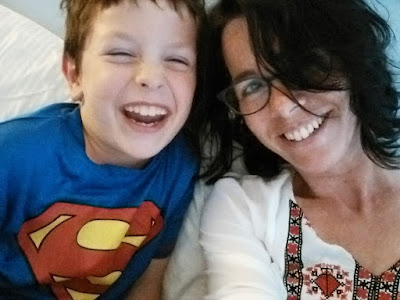 I fell in love with her online.  Nicky and I seemed to have lived in a parallel universe in many ways.

Exactly what drew me to her, i am not even sure.  But I knew her and she knew me.  I was so thrilled when she told me that she and her son, Max, were coming to visit me in 2012.

Alex and I drove to the airport and were very excited to meet them both.  We had brought snacks for Max and could not wait to see them in person.  Even before the plane had landed, we had checked a hundred times to be sure we would be there on time.

Finally, the plane had landed, and I insisted that Alex drive up to the terminal level to see if they were outside.  My first sighting of Nicky was a young woman with beautiful alabaster legs standing on the  curb wearing a pair of shorts and high heels, smoking a cig as a lovely boy ran in circles around her knees while she spoke on a cell phone.  She was the most glorious woman I had ever seen.

Five minutes later, Nicky and Max were in our car heading home to our house in Alameda, California.Max was curious about every thing he saw.  He was such a smart little guy!  His introduction to our crazy pit bull Zoe worried him a bit, but he soon got more relaxed with her.  Max was more comfortable with staid and reserved Harry, deeming him to be a "good boy".  He told us very seriously in English that ZoZo was "not a good boy".

Max spoke very little English, but that did not stop him from bonding with us.  His fluent French and Alex's fluent English was enough to make a firm friendship between them.  He was the most beautiful little guy I had seen in years.  Alex and Max spent many hours playing chess, and I was pleased to see that Max actually won several games.

Max and Nicky and JP got on Face Time a couple of times a day and I was lucky enough to walk in on some of their online visits. JP was so happy to see his gorgeous wife and boy child.  JP was a handsome and sexy man.  He and Nicky flirted obviously delighted with each other for an hour every day while they were here.  I was so happy seeing that kind of affection.

We drove to San Francisco and on the ride I spilled Diet Coke on Alex accidentally.  He was not pleased.  Alex's displeasure caused me and Nicky to start laughing.  The more we tried to stop laughing, the worse it got with snorts and snickers.  Soon Max and Alex joined in the absurd giggles.  Nicky and I also managed to get locked in our parked car after setting off the alarm.  Panic ensued!  It was getting hot in the car and we couldn't open doors or windows.  I finally called Alex and he told us how to shut it down.  We looked at each other after the horrid siren had quit screeching and simply cracked up.  Neither of us was really good at dealing with a crisis.

To say I will miss Nicky isn't really true.  She is in my heart and always will be right there.

Posted by Linda Medrano at 8:00 PM No comments: