Drunken Encounter With A Cat 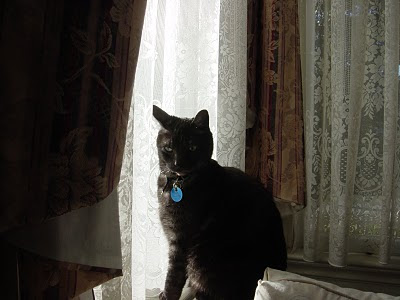 My cousin, Kelly, is a whimsical girl.

I love her with all my heart, but I also know she's a little goofy. (It adds to her charm.) My husband was on a trip (when isn't he?) and she and I were on the phone. Kelly lives in Oklahoma.

I was bored and sick of being home alone and I started begging Kelly to fly out for the weekend. She replied "Oh, I wish I could." Well, hells bells, what's keeping you from doing it? "Money." Oh yeah, that. Never mind, I'll pay for the ticket. Just get the flight you want and I'll book it and put in on my card. Kelly hemmed and hawed over it until I threatened to catch my house on fire just to get firemen to come over and entertain me.

She finally agreed. I arranged for a limo to pick Kelly up at the airport and rather than go straight home, we had the driver take us up to the Napa Valley for wine tasting. This was about noon so we stopped first and had lunch at a beautiful bistro and shared a wonderful buttery oak infused Chardonnay with our lunch.

We visited a couple of wineries after that and had the limo take us home. Both of us were having a little trouble walking at this point. Naps were in order. We slept for a couple of hours and then got ready to go out for dinner.

Kelly is very meticulous about her dress and she asked me for an iron to press something. While searching for the iron (that I do not use), I decided to open us a lovely bottle of wine. Probably not my best idea ever after drinking the afternoon away.

We had a lovely dinner with, yes, more wine. When we got home and opened the door, our new cat, Smokey, slipped past us as we were walking in and ran out. He was not really an outdoor cat so I was concerned. Kelly said, "Oh, he'll be back when he gets hungry," but that really didn't satisfy me. I told her I was going to change clothes and go out looking for him and she said that she would come with me.

It had to be close to midnight at this point since we had taken a long time at dinner, oh yeah, and then we stopped in the Biker Bar and had a drink or two with some motley guys.

If you are keeping score, we had quite a lot of booze in one day. This did not deter me at all from my quest to find Smokey. We walked the streets calling his name. After about a 1/2 hour, we were ready to give up when we called his name one last time. A pretty white cat (Smoke is black) came running to us out of the shadows making a jingle sound when she ran from a bell on her collar.

We sat down on the sidewalk and Kelly started talking to the cat. The cat vocalized right back at her. Kelly said "That cat knows right where Smokey is and she wants us to follow her." So we got back to our feet and followed the cat as she kept looking back at us.

About 3 houses from my own, the cat took a turn down a driveway and under a fence into a back yard. Quietly, we opened the fence and whispering "Smokey" we started to go into the yard. (This was a house where a single man lived, but I did not know him and had only seen him once or twice before.)

"Hold it right there!" a loud voice came. "What are you two doing in my yard?". Kelly and I grabbed each other in terror. A man with a flashlight came out the back door. At first I thought he had a gun. We froze. Kelly started explaining that we were looking for my cat. I tried to interject that I was actually his neighbor from 3 houses down, but Kelly kept talking and telling him that this pretty white cat had told her to follow her and that Smoke was in this back yard.

The guy sort of chuckled and said "Have you girls been drinking?" Well, of course he already knew the answer to that question.

He flashed his light around the backyard and Smokey gave a little "meow" and ran out from behind a bush. I grabbed him in my arms.

We apologized to the man, David, we learned by then and after offering him a drink that he wisely refused, we went back home.

Kelly still swears that white cat talked to her.
Posted by Linda Medrano at 2:49 PM No comments:

Are They Going To A Prom? 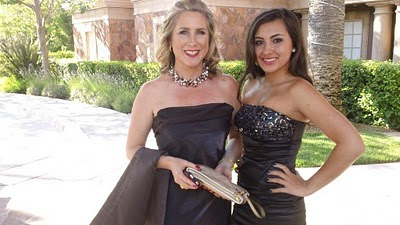 The blonde is my daughter, Sheila. The brunette is my granddaughter, Ari Yasmin.

18 year old David was sure they were sisters and going to a senior prom. David is my neighbor boy. Well, neighbor man, since he's almost 21 now. I have secured David's services now because my husband is away and a woman's got to do what a woman's got to do.

Okay, the kind of services I'm hiring David for are dog walking services. Harry is a big orange dog and while he has great manners and understands commands, the sight of a squirrel sends him airborne. This could be a problem for me walking him. Harry knocked Honey (my older and smaller female dog) down the stairs this afternoon ass over tea kettle, trying to get to a squirrel on the fence in our back yard.

Harry is what Double O refers to as a "potcake". Potcakes are dogs of dubious heritage where she lives on an island in the Bahamas. She says they are the color of burnt rice. Harry is orange, and that is close enough.

David agreed to walk Harry for me. Since I have known David since he was an 8 year old boy scout selling me magazines I didn't want, I expected him to be fairly reasonable about his price. Also, I know from his dad, that David's currently working at a part time job making $10 per hour. I figured walking the dog would have the same approximate price tag.

I figured wrong. I mentioned 20 minute to half hour walks every afternoon and suggested $5 per 20 minute walk. David looked slightly offended, but quickly recovered and said "Well, whatever you want." I asked if he had another amount in mind, and he allowed as to how a friend of his walked a dog for $25. That seemed a touch high to me for 20 minutes to 1/2 an hour.

I inquired how long his friend walked the dog for, and David said "Oh for an hour or so." Uh huh. Well, we compromised and agreed on $10 for 1/2 an hour. He took Harry out and came back in about 10 or 15 minutes. David took the $20 for his 10 or 15 minute walk that would include walking Harry tomorrow as well.

Somehow I feel this is not going to be a great business arrangement for me.

Maybe my daughter or granddaughter will date him and I'll get a better price.
Posted by Linda Medrano at 9:30 PM No comments: