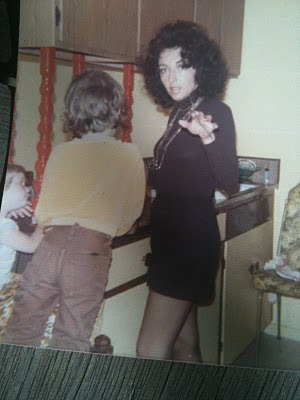 I was starting college for the first time and I enrolled in night classes. I was scared to death. I really had no reason to think I would do well in school, but I wanted to try it.

I was also engaged to be married, (again). I had no reason to suspect the marriage would be successful, but I wanted to try it. I really hoped to give my crazy life some stability and my children some security.

The two things (school and a marriage) collided a little. I unexpectedly fell a little in love with my English professor, (a very soulful and sensitive young Muslim man), about two weeks before I was due to get married. He and I had a "moment" or two, but I did go ahead with the wedding.

(Although my professor and I stopped being an "item" after I was married, surprisingly I still got an "A" in his class.)

I married a man 23 years my senior, and a high-level manager at Chevron. My husband was also a cowboy, a hunter, and a general outdoors-man. I thought I was the luckiest woman in the world despite the fact that I was not an "outdoors-type" woman.

Little did I know that I was perhaps making the biggest mistake of my life. My new husband wanted me to change completely right after the wedding. No more mini-skirts! No more make up! No more high heel shoes! (You can see where this is going, I'm sure.)

I was working full-time, going to school 4 nights a week, and trying to fulfill wildly divergent roles. I was a mother, a new wife, a student and a working woman. Something had to give, and it did. Not only did I continue to dress as I pleased, I also neglected the laundry and cooking because of my heavy load at school.

My husband became a brutal drunken lout. He was also physically abusive enough to land me in the hospital on more than one occasion. I had experienced rocky relationships in the past, but broken ribs were never an issue before.

I quietly arranged for my children to spend the year with their dad and his wife. They were happy to do so. In the meantime, I considered putting an ax through my husband's head when he was sleeping, or shooting him with one of the many guns he kept around the house. (I could always claim I thought he was a prowler.) Instead, with the help of a dear new friend, (who happened to be a lawyer), I filed for divorce.

My husband did not take this well. I had to get a restraining order to keep him from getting anywhere near me. I was actually afraid that he would kill me as he had threatened numerous times.

The good news is, I finished my first full year of college with a 3.8 GPA. I sold my wedding ring and got enough money to take my children to Disneyland for a week, and I got a promotion at work.

My dear new friend turned into a boyfriend, and yes, I am playing around a bit with the timing of this relationship transformation. My new boyfriend did not mind my mini-skirts and high heels in the slightest.

Imagine that.
Posted by Linda Medrano at 3:29 PM No comments:

I Cannot Look At Train Wrecks 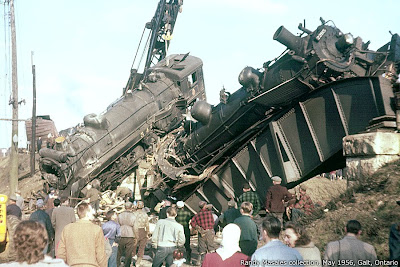 I cannot look at train wrecks.

If I see an ambulance and a police car, or paramedics at my neighbor's house, I move away from the window. I will call later to see if I can help in some way. But I won't watch someone in distress being carried from their home.

If I see a twisted wrecked car along the side of the highway, I immediately avert my eyes. I am not drawn to tragedy. Actually, I go to great lengths to avoid the "unpleasant".

The news is full of images of damaged bodies. I can't stand looking at them. I feel just as strongly about gazing at damaged souls. When I caught a glimpse of Britney Spears wildly chopping off her hair, I had to turn away. When I saw Anna Nicole Smith at an awards ceremony and obviously drugged, I couldn't look at her. I can't watch Lindsey Lohan and her exploits. Charlie Sheen is the latest poster child for troubled souls. I can't bear to watch him being interviewed because it's too sad.

I think I'm afraid of these horrifying and humiliating things and that's why I can't take part in watching. I know all too well what it feels like being carried on a gurney to an ambulance after an injury. I hated seeing faces at the windows watching me.

I also know what it's like to "lose it". I've screamed and cried and thrown things in rage, and in despair. I hate that there were witnesses to my degradation, but relieved I wasn't doing it on camera.

I've also been drunk. I'm just glad there were no cameras to record my behavior, or maybe I should call it "misbehavior". Nobody is at their best after too much to drink.

I had a boyfriend once who was drawn to my "crazy". He had a dark soul and loved the darkness in me. The worse I got, the more he loved me. In the end, he would have destroyed us both.

I do not love darkness nor do I embrace it. I love the light. So I really cannot look at train wrecks.
Posted by Linda Medrano at 10:50 AM No comments:

At Least Once In A Lifetime 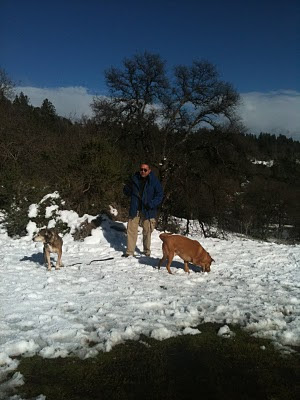 We should all experience snow at least once.

My dogs have been to the ocean, to the desert, to the mountains, to the country and the city many times. But they had never experienced snow.

I'm not a fan of snow, but it's something we should all encounter at least once. There is a cold, crunchy purity to it. It actually looks pretty magical, but of course, that's a facade and it fades to dirty wet stuff eventually.

The illusion of this pristine substance is enough to make it worthwhile to see. We took the dogs up into the mountains about two hours from home last weekend to let them judge for themselves.

I was pretty sure Honey, my older female, would take a look, sniff and want back in the car (something like her owner), but I was very surprised. While she did not opt to wallow in the snow, she did enjoy the texture, the smell, and the taste and the new experience.

Harry, the younger male dog encountered his first experience with snow with abandon and excitement. He dug in it, ate it, and raced around seeing if it was real or a figment of canine imagination!

I was really happy that the pups got to see snow in their lifetime. Everyone should.

I thought about getting out of the car and into it myself, but then decided not to. I've seen snow before and it's cold and crunchy and pure but only for a moment in time.
Posted by Linda Medrano at 2:04 PM No comments: