I Was Supposed To Marry Elvis 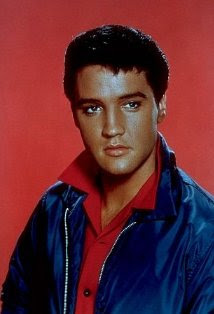 I think I was 10 when I first saw Elvis Presley on the Ed Sullivan Show.

Before that first introduction to the man who should have been my first husband, I had planned to become a nun.  I prayed on it, and was sure I had a "calling".  That "calling" went right out the window when Elvis made his appearance on the small black and white television screen.

I was 12 when Elvis left to go into the Army.  I was distraught, but brave.  I knew he'd probably come back alive since he was in Germany and it was not during a war or anything.

While Elvis was in Germany, he met this girl, Priscilla, who was only 14.  I was stunned.  I was not too young for him after all, having turned 13 and 14 while he was gone.  I had black hair.  I could have gotten blue contacts if that's what he liked.  I loved him.  I gave up being a nun for him.  My mother hated Elvis at first, but then she and her sister fell in love with him about the time he started doing those tacky Las Vegas shows.

I moved on from Elvis when I was almost 15.  I even stopped seeing his movies.  My mother and my aunt still swooned over him even in those stupid looking jumpsuits.  If I had been his wife, I would not have allowed him to wear anything so dumb.  (Ask Alex if you don't believe me.)

If I had been able to marry Elvis at 10, I would have in a heartbeat.  By the time I was 15, the love affair was over.  It may be just as well, seeing as how it didn't turn out really great in the long run.  I still think the guy could sing though.

I visited my son in Memphis when he was in Millington, TN,  doing his "A School" to become a Navy Airman.  My daughter Sheila and I stayed in a suite at  the Hyatt Regency.  My son John joined us there for the weekend.  Sheila and I were going on to Oklahoma City to visit my mother's older sister, Berta, for a few days on our trip before returning to San Francisco.  The day we left Memphis, I called my aunt to confirm our arrival time with her.  She was horrified that I had been in Memphis and not visited Graceland.

My daughter and I told her we would try to get on a tour before we caught our airplane.  We took the Graceland tour.  I never felt so inbred in my life.

When I saw the "jungle room", I thanked my lucky stars I had escape the fate of being Elvis's wife.
Posted by Linda Medrano at 6:00 PM 6 comments: 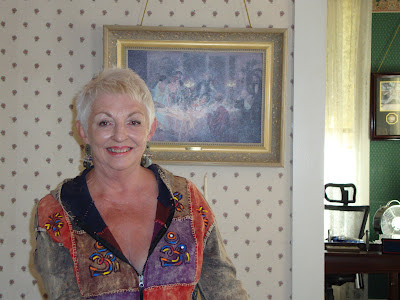 Can you grin like an idiot when you are sad?

I can.  I'm bored and I'm missing my husband.  I've done a number of things to "keep myself busy" but none of it is working.

I'm taking the dogs out in a bit to Coast Guard Island.  That may or may not cheer me.

Alex is gone again and he has been for a while now.  He spent all of the month of June away, and he's gone until the end of August this time.  Shoot!  That's our summer!  I hate it when I'm home alone.  But I hate doing things just to be doing things too.

I went to a party yesterday hosted by a lady across the street.  I really didn't know anybody but they were all friendly people.  I drank two glasses of white wine, felt it hit me and went home.  I just felt miserable.  Being around a bunch of people didn't make me less miserable.

I think I should put on my ratty old robe and ratty old nightgown and just not get dressed until Alex comes home again.  Oh wait.  I have to go to San Francisco to the doctor tomorrow.  I like my doctor so I don't really mind.  Well, I do mind because he's going to ask me if I've been to the gyn and had the mammogram he ordered for me.  I have not done either thing and I have no immediate plans to do them.  I am just not in the mood for all that tom-foolery right now.

Maybe I'll ask the doc for some happy pills.  Oh shoot, I doubt there really is such a thing.
Posted by Linda Medrano at 4:48 PM 2 comments: