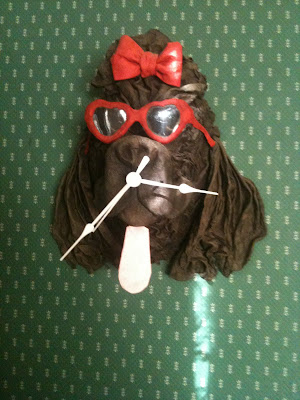 This dog looks very much like my late dog, Mitch. Mitch was a girl, a cocker spaniel, and I bought this clock because it reminded me of her.

I get bluesy during this time of year. There's a watery quality to the sunshine and the light starts to fade too early. Waking at 7 AM, it's still dark outside with just a hint of dawn on the horizon. Never mind. I don't get up until 9 AM anyway.

I took the sunglasses off the dog clock and put them on myself. For some reason, those goofy sunglasses made me feel happy. I saw a woman going to work one morning wearing a hat with cat ears sticking up on top of it. I think this is kind of the same thing.

I wore my red heart shaped sunglasses to the store this afternoon. Everybody smiled at me. That made me feel happy too. 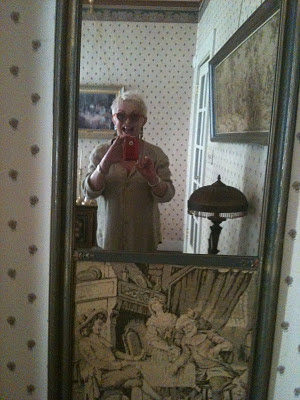 I guess I'm old enough now to wear heart shaped red sunglasses. People may think I'm a bit "touched" and they might be right.

Still, it's better than dressing up like Cat Woman. I used to do that when my grandson Cyrus was about four and wanted to be Batman and I tied pillowcases across his shoulders to make a cape.

My daughter was embarrassed about both of us in those days. I put on my black catsuit and boots, and put on a headband with cat ears and off we went! Cyrus was proud of his paisley cape. Sometimes he wore a black chiffon cape. Then his mother was really disturbed.

We didn't care one bit! Cyrus is 18 now. He still remembers going to the shopping center as Batman and me dressing up as cat woman.

He thinks I rock.
Posted by Linda Medrano at 3:31 PM No comments:

Spelling It Out For Men 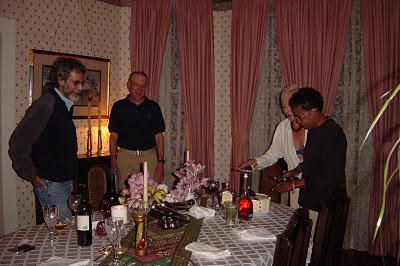 I like men as well as the next girl. I think they are cute, smart, sexy, funny and all the good stuff. But they do have a weird characteristic. They have to be told exactly what you want them to do.

If I ask Alex to feed the dogs, he does so. After feeding the dogs, as we are walking to the car to go out for an evening, I ask "Did you check the water bowls?" Of course, he did not. "The water bowls are right next to the food bowls, Alex."

When Alex was traveling, I had my friend Nelson carry home a 25 pound of kibble for my dogs. I further imposed on Nelson to open the kibble and pour it into the bin for me. He complied. What Nelson did not do is take out the plastic measuring cup that was in the bottom of the bin. When I asked, where is the measuring cup, Nelson said it was in the bin. "At the bottom of the bin?". "Yes," he responded.

My darling professional dog trainer, Todd, was here yesterday. We were taking Zoe on a walk to help me understand what needs to be done when walking her. Todd is emphasizing that we need to stay two steps ahead of Zoe mentally and watching our surroundings at all times. He had Zoe on the leash, and a young man walked up. Todd and Zoe were completely blocking the sidewalk. Zoe jumped up on the young man to say hello. Todd got so caught up in the mechanics of training that he completely missed what was going on around him.

Do you see where I'm going with this?

I think sending a man to the supermarket really makes my point. If you ask the man you live with to go to the store and bring home four things, he is going to have a difficult time. Let's say you ask him to pick up coffee, bread, a green vegetable and some olive oil.

Although he lives with you and knows what kind of coffee he drinks and bread he eats day after day, year after year, you'd never know it when he comes home. The coffee will be "Sumatra Roast" when you drink French Roast. The bread may be pumpernickel. A green vegetable may be a package of frozen peas. Or it could be grapes or a kumquat. And the olive oil will be a can of Crisco. And that's on a good day. If you don't make him write the list on his hand, you can forget getting anything you ask for at all.

Oh he'll pick up beer. And maybe a big bag of tortilla chips, plus some salsa. A couple of packages of cookies and maybe some ice cream. There may also be a package of frozen chicken wings. Great!

When asked about the coffee, bread, vegetables and olive oil, he will respond that he couldn't find them, or that the supermarket was out of those things.

Or he will hit his forehead with his palm and say "Damn! I knew I forgot something!"
Posted by Linda Medrano at 9:52 AM No comments: