He Knew It Was Gonna Be A Bad Day! 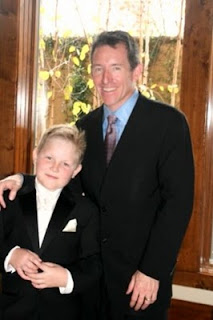 I'd like to introduce my son, John. John is a prominent attorney in the Sacramento, California area and he specializes in Family Law. Johnny is in his early 40's and successful, hard-working, smart as a whip, and extremely good looking. John is tall, slim, very athletic,and he runs marathons. He is happily married to Kate, and they have 4 beautiful children. I've heard people say John looks like a young Richard Gere.

Yesterday was my birthday. I almost always get flowers from my son on my birthday but yesterday I did not. John called last evening to tell me that my "gift" would arrive the day after my birthday because he had a really bad day. It seems his socks were stolen very early in the morning. Now, I've heard of "the dog ate my homework" excuses, but "my socks were stolen" is a new one to me. Pray tell, John, how did this come to pass?

John is an early riser. He gets to his office between 6 and 6:30 AM every day of the week and usually one day over the weekend as well. Yesterday morning was no exception. John likes to spend an hour at the gym located in his downtown office building before beginning his day. He went into the gym's locker room and changed into his work out clothes. Since he was the only person there, and because it is a pretty secure environment, he does not have a lock for his locker.

In the midst of John's work out, another man came in and they exchanged "good morning" greetings. The guy who came in went into the locker room to change. A different man walked out of the locker room, walking briskly and keeping his head down. John thought to himself "Where the hell did he come from?" Finishing his exercise routine, John went to shower and get dressed. He had a meeting scheduled for 8:00 AM and needed to be on time. He dressed in his underwear, and navy blue wool suit, put on his snowy white crisp cotton shirt, and yellow Hermes silk tie. John reached for his shoes and noticed his socks were not there. He distinctly remembered laying his socks across the top of his shoes and putting his empty athletic bag on top of them. The socks were gone. He looked everywhere including in the trash basket. The socks were gone. All at once John recalled the mystery man who hurried out of the gym. A light bulb went off in John's head and he thought "That guy stole my socks!"

He put his shoes on his bare feet, pulled on his cashmere topcoat and walked out of the gym to the security desk. Two security people looked at him expectantly. John told them "Someone stole my socks while I was in the gym." The security people suppressed a snicker and said, "What makes you think your socks were stolen, Sir?" He held up his leg and said, "I am a lawyer. I am wearing a suit and tie and a cashmere coat. Do I look like a man who would not wear socks?" The security guys were properly chastised by John's comment and they quickly agreed that no, he did not look like a man who would not wear socks. They further asked if John had any suspicions about who might have stolen his socks.

John then relayed the information about the man who hurried out of the gym with his head down. The security people looked at each other and said "Did he have curly hair?" and John responded "yes!". Then they said "Was he wearing glasses?" Again, John said "yes!". One of the security people then asked "Did he look kind of weird?" Yeah, come to think of it, he did look a little weird! The security team indicated to John, "We think we know something about this!" It seems last week, another man had his underwear stolen from the locker room by a man matching John's description. They were going to look on the security tape and see what they could turn up.

John, at last felt like he was being taken seriously and he turned to go upstairs to his office. Realizing he was not wearing socks, he was hesitant to make a first impression dressed like an eccentric. The morning was pretty taken up with explaining why he wasn't wearing socks, running to Macy's as soon as they opened to get another pair of socks, and feeling the trauma of violation. He returned to the Security station after lunch and asked if they had been able to identify the possible thief. They said that they were pretty sure they had him on camera. Then they asked John, "How do you want us to proceed with this?" John responded that he didn't want those socks back if that's what they meant. The security people nodded gravely and said "We'll keep you posted Sir."

If this isn't a good excuse for not sending me flowers on my birthday, I don't know what is.
Posted by Linda Medrano at 2:56 PM 9 comments:

Dear God, why do I only want to eat chocolate? In fact, Swiss chocolate is the only thing I have been able to think about since I woke up this morning. My husband, Alex, brought me back a box of Lindt of Switzerland dark chocolates when he came home from Europe on Saturday night. I put off opening them as long as I could because I knew what would happen once I did. I knew I would put piece after piece in my piggy little mouth and chomp them down. The other reason I did not open them is that my daughter, her husband and my two grandchildren were here this weekend. I did not want to offer them any of my chocolate. In other words, I am a selfish, greedy and gluttonous bitch.

These chocolates are not just good; they are sinful. If I were a religious woman I would have to go confess my sin after gobbling down a one pound box of them. I am not a religious woman, thank God. If I was skinny, it wouldn't be so bad. I am not skinny, or even borderline skinny. I'm walking the tightrope between curvy and fat because I never understood the concept of moderation. If a little bit of something is good, why isn't more better?

Nothing on earth is as wonderful as chocolate - not sex, not money, not kittens, not babies, not rainbows or butterflies. All of those things are sweet and cute and fine and all, but they don't even come close to the rapture that is chocolate!
Posted by Linda Medrano at 1:08 PM 5 comments:

What Was I Thinking?

We had a friend, an acquaintance really, and we had known him for several years. Let's call him Juan, shall we? Juan detailed cars, and took care of my husband Alex's fleet of BMW's for about 10 years. Juan was a big guy, quick to smile, very friendly, very outgoing! Alex and I really liked him. Juan took pride in his work and did his very best to keep cars looking sharp! We recommended him to friends, and sent a lot of business his way.

We got a frantic telephone call from Juan one Saturday last October. He needed help and he needed it right away. Alex took the call and after he hung up, he relayed what Juan was asking for. It seems that Juan was working on a "deal" with a major company (Pixar Studio's in Emeryville) to take care of their fleet of company cars. Juan had met with the top guy from Pixar the day before and was assured it was all but a done deal.

So what's the problem right? It seems that Juan told the potential client that he had two luxury boxes for the Oakland Raider's game the next day. Juan needed to pay for the boxes that very day and he didn't have the cash and couldn't get it on a Saturday. He just didn't know who to turn to, but this could be the break he had been looking for all his life. Could Alex and I help? If we could just go with him to the Raider's headquarters and put the boxes on a credit card, he would return the money to us on Monday when the bank opened.

I felt bad because Alex had more or less said "sorry, Pal". I wanted to help Juan. I called Juan back and asked him how much the two boxes would cost. He replied that it would be about $6,000. I took a deep breath when I heard the amount, but went ahead and said that I could do it. I also said that the money would have to be repaid on Monday. "No problem. No problem" I was assured. In fact, Juan invited me and Alex to the game as his guests. (Or, at that point, I guess it was Juan who was our guest, isn't it?)

Juan and I drove to the Oakland Raider's headquarters in Alameda and I put the two luxury suites on my credit card. Juan assured me the entire time that as soon as the bank opened on Monday, my money would be returned. I repeated to him that it would be imperative that it was. "No problem. No problem." I was told again.

We did attend the game and the Raider's lost miserably. Maybe it was a sign of what was to come. On Monday, we didn't hear from Juan at all. Nor did he call on Tuesday. By Wednesday, I was getting a little worried. I called Juan and he told me that he had been in Mexico because of a death in the family, but to come on by because he had a check for us. He did have a check for us. Unfortunately, the check bounced. All in all, it took us a full three months to finally get the money back from Juan. I got excuse after excuse, phone call after phone call telling me "I've got the money and I'll bring it to you tonight", and promise after promise, but no money for three months!

Alex never once told me that it was stupid of me to loan Juan that kind of money. He didn't have to. I had just assumed that I was doing a good turn for a friend. The loss of that amount of money was something I really couldn't afford, but the feeling of being betrayed was even worse. I hope I learned a lesson here. This is a fine example of a good girl making a bad decision, isn't it?
Posted by Linda Medrano at 8:57 AM 4 comments: