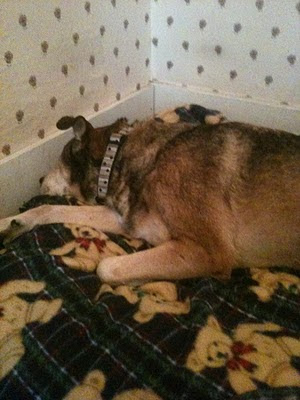 Honey's bed is in the dining room, right next to the floor heater.

She has a teddy bear blanket that she loves to sleep on. We've been watching her very closely since yesterday afternoon. In fact, I slept on the floor by her side last night.

Friday, yesterday, we took Honey and Harry to their park and they had a good time. Everything seemed normal. Honey was in good spirits as was Harry. We had a full house on Thanksgiving and both dogs love company, particularly if it includes kids.

Now they don't love kids for the obvious reasons, they love them because they drop food. If you follow a kid long enough, you'll get a snack. Works every time.

About 4 in the afternoon yesterday, Honey had been napping in a spot of sunlight in the office. Harry barked at her because he wanted to come in and she was blocking his way. Alex said, "Boy! She's really sound asleep!" I walked over to look and she opened her eyes.

I nearly had a heart attack when I saw that her eyes were completely rolled up in her head. I then noticed that her legs were at a very odd angle. She tried to get up and she couldn't.

I called the vet and we rushed her right in. They kept asking about toxic substances that she could have gotten into. To our knowledge, there's nothing like that around.

To me it looked like she had a stroke. The vet said that was possible, but toxins weren't out of the question either. Honey is about 11 years old. She's had very bad hips and arthritis since we got her nearly 6 years ago.

Honey has had a good life. She's a great dog and is truly my "forever" girl. I have hired an acupuncturist for her. She gets massages. She eats better than a lot of people. But she's getting old and there really is no cure for that.

The vet told me to take her to the hospital and they could put Honey on an iv to get fluids into her and monitor her overnight. I asked if they could give her some fluids along with doing the blood and urine work-ups and she said yes. I said I would bring Honey home and we would monitor her.

Honey was incontinent during the night so I gently cleaned her and replaced her bedding a few times. At 7 this morning, she couldn't even let me give her sips of water out of my hand. I told Alex I was going to call the "house call" vet to come and euthanize her. We both shook our heads but thought it would be the best thing we could do for her. I planned to call at 9 AM.

About ten minutes before 9, Honey stood and got out of her bed. She walked to the kitchen door on wobbly legs and Alex carried her downstairs so she could "do her business". She walked up the stairs by herself and she wanted breakfast.

I spoke with the vet earlier today. She said that Honey's lab work looked fine and that the probable problem was a stroke or some other neurological event. Further, the vet said that older dogs do have them but sometimes they recover and are just fine. (Of course, the vet also added that sometimes they have more strokes after the first one.) For today, we've cheated death for Honey.

Right now, I remind myself of a frog I had when I was a kid. The frog got sick and his eyes swelled up almost shut and then he died. My eyes look like that today. I hope I don't have what he did.
Posted by Linda Medrano at 1:55 PM No comments:

One of my favorite sex scenes of all time (besides my own) was between Marlon Brando and Anna Magnani in a very dark 1960 film called "The Fugitive Kind".

I really don't remember that much about the movie, but I remember the scene. Marlon Brando played a drifter who comes to work at a store owned by Magnani and her somewhat sadistic, invalid husband. Magnani clears out a storeroom and puts a bed in it, saying something to Brando like "You might as well sleep here since you don't have a place."

Brando walked up behind Magnani as she was showing him the storeroom. From behind, he pushed her into the wall with his body and then kissed her neck. They were both fully dressed at the time. I know I moaned out loud right in the movie theater.

This was a film adaptation of a Tennessee Williams play. Williams' stories are always set someplace in the hot and sweaty South. He really is not one of my favorite writers. But this scene made me feel something on an emotional level.

Over the years, I've seen a lot of very "raw" sex scenes in movies. Some have worked better than others, for example, "9 1/2 Weeks" and "The Postman Always Rings Twice" and "The Piano". But none of those films have one particular scene that ever actually become embedded in my mind like the scene with Brando and Magnani.

There was a rawness and an honesty to the scene which was done by two very skilled actors who both "brought it" that day for that scene.

Many years ago, Alex and I saw an amazing Japanese film called "Realm of the Senses". The movie featured mainstream Japanese actors and was a love story between a prostitute and a man. What distinguished this film from any other I've ever seen was that perhaps a full three minutes of the film actually showed graphic sexual penetration.

It was probably the most honest portrayal of sex in a relationship I've even seen on film. I found it somewhat surprising, but not nearly as stimulating as the sex scene in "The Fugitive Kind". My imagination provides much hotter sex than graphic portrayals on screen.
Posted by Linda Medrano at 3:56 PM No comments:

Going To The Nudie Bar 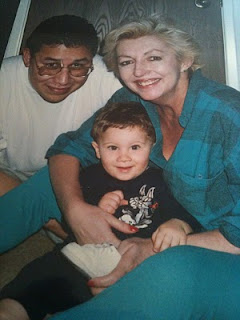 What a difference 17 years makes!

In the photo, my first grandchild, Cyrus, is shown at about a year old. I was at the hospital when he was born and spent every possible hour with him from that time forward.

Cyrus will turn 18 early next month. I sometimes wonder how that is possible. He and I have been "best friends" since he was born.

He still calls me about 3 times a week and spends the night at "G-ma's" house at least once a month. Cyrus has told me "secrets" from the time he could talk and I hold those secrets deep in my heart.

When I asked him what he wanted for his birthday this year, he was a little cagey. I suggested that we could probably arrange to get him a hooker and he said he had one last year. Then he corrected himself and said, "Actually, it was a couple of weeks ago, but it sure seems like a year!" That Cyrus! His mom promptly covered her ears and started saying "No! No! No!" until he walked out of the room. He was joking (probably).

His dad has promised to take him to a nudie bar for his birthday. I guess they let 18 year old's in these places if they don't serve alcohol.