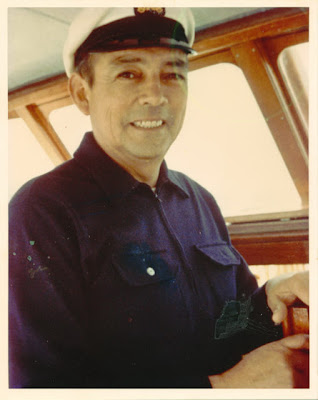 If I had a dollar for every time I heard my mother say those words to me, I'd be a 1% 'er.

My Mother was not implying that I was 6 foot tall and 200 pounds because I wasn't.

She was not saying this phrase with the intent of complimenting me either. My dad was a cop, a womanizer, and a gambler. I have done a little gambling but not to excess like he did. Dad could never resist a pretty woman or a horse race or a card game.

I like pretty women myself but that's the only similarity I can find.

Oh wait. There is one other thing. Nobody ever heard my Dad say "I don't know." I doubt anyone has ever heard me say that either. I just make something up if I don't know and present it with authority. I'm sure my Dad did the same thing.

I also was (in Mom's opinion anyway) promiscuous. Well, looking at it from her viewpoint, I guess I was. I never worried too much about sex and it seemed pretty normal to experience different people. It was fun. I never felt bad over it because I didn't see it as wrong.

I did bet the rent money on that one horse called "Another Color", but I won so I don't have to count that, do I?

Maybe I am my Father's daughter.
Posted by Linda Medrano at 3:20 PM No comments: 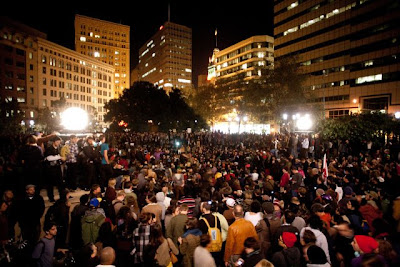 I worked in Oakland for several years.

Basically, it's a scrappy city. There's a lot of crime. It's dangerous after dark in the wrong neighborhoods. And it may have the highest number of "drive by shooting" incidents in the country. I have a lot of friends who still work and live in Oakland. I like the place, myself. There is a "flavor" to Oakland that's hard to miss. Upscale restaurants and clubs, pretty ladies with gardenias in their hair, men dressed up in suits with fedoras and shiny shoes. There is charm and character to the place. Oakland is across a drawbridge from where I live in Alameda.

On June 9th,2010, a major protest was held in Oakland over the shooting of an unarmed black man, Oscar Grant, by a white transit cop. The jury had just convicted the cop of "involuntary manslaughter". By nightfall, the scene turned violent and ugly. Downtown store and business windows were shattered, graffiti marred every available surface, and looting and violence were everywhere.

This night of violence came after a late afternoon of peaceful protest and prayer. Most of the legitimate protesters went on home when the sun went down. That's when the self-proclaimed "anarchists" stepped up their game.

Oddly, the hoodlums had come from other areas to cause mayhem. Many of them were white. Of the 80 people arrested, only 19 of them were Oakland residents. The Oakland police department exercised a lot of restraint in the entire situation. As a result, most of the culprits were not arrested at all. The millions of dollars in property damage and stolen goods were left to the insurance companies and business owners to handle. It was a costly evening.

Currently, we have the "Occupy Oakland" fiasco to contend with. People and their tents simply moved in to the Plaza outside of City Hall and put up their tents making an instant tent city. When ordered to disperse, the protesters refused. The police were receiving numerous complaints because of a sexual assault, violent attacks, threatening behavior by the protesters to passersby, and a fire in the encampment. Also, although there were portable toilets provided, human waste was saturating the areas around the tents.

The police staged a pre-dawn raid and took the tents down. The police were pelted with bottles, paint balls, rocks and utensils from the camp's rat infested kitchen area.

After numerous warnings that this was an "unlawful assembly", the police started using rubber bullets and tear gas to disperse the crowd. It is estimated there were about 1,000 protesters and approximately 500 police officers in the stand off. A couple of people on both sides sustained injuries, most notably, an Iraq War vet and protester who suffered a skull fracture.

One thing I did notice from watching the footage of the riot is that the majority of the protesters involved were white, and most of the people arrested were not from Oakland. The black people were few and far between in this mess.

In other cities, the "Occupy" movement has been handed with dignity and lawful behavior by the protesters. Why was this not the case in Oakland?

I'm tired of people coming into Oakland to make it their personal garbage can. And I support the police action for dispersing the unruly crowd. Go back to your suburbs and trash your own backyard. Get out of mine.
Posted by Linda Medrano at 9:03 AM No comments: