The Truth About Turtle Sex

I never really thought about turtle sex too much.

That changed a couple of weeks ago when Alex called me from the car on his way home and told me he had picked up a very large turtle who was walking down the street. 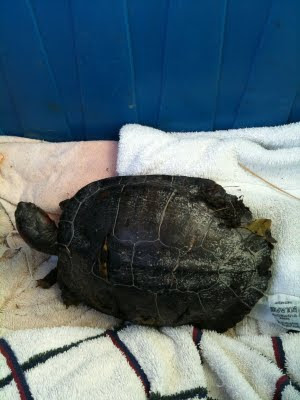 Because I can be a touch dimwitted, I said great. (I thought he was kidding.) Alex showed up a few minutes later with Albert, a big green turtle with sharp claws and a kind of funny looking head.

The second photo to the left is an actual picture of Albert. After seeing him up close and personal, I told Alex to put him in the fish pond. (I'm assuming he could swim, or at least I hoped so.) Realizing we actually knew absolutely nothing about turtles I thought I'd better get on the internet and look for some information. That's where I found the top photo of turtles mating.

I figured Albert got out of his habitat and was looking for a girlfriend to mate with when Alex found him. I also determined that he could have any number of weird turtle diseases and that we really were not equipped to take care of him.

Living in California, the first thing I thought of was "Turtle Rescue". (Well, in Racine, WI, they may not have anything like that, but I was betting that in the shadows of San Francisco, we did.) I was quite right! There was a "Turtle Rescue" place about 20 minutes from our home. I called the number and waited impatiently for a call back to my rather urgent request for help.

Within ten minutes, the phone rang and it was the lady from the turtle rescue. She listened to me saying that this was a very nice turtle but I really knew nothing about turtles and wanted to do what was best for him. (I also told her we had named him Albert, but she made no comment at all saying if she thought that was a good turtle name or not.)

She gave me her address and said if there was no answer to just leave it in the box outside on the porch. I hung up and thought, here is this nice woman who cares so much about turtles that she rescues them. Isn't that wonderful? I had images of a slightly plump sweet older lady with gray hair and glasses who just loved her some turtles.

Alex fished Albert out of the pond. We put him in a large tupperware container with holes in the top and a little water in the bottom. I thought he looked a little intimidated over all the handling, in fact he might have made a bit of a funny noise, but I wasn't sure. I was a little relieved to have him out of our fish pond because of those potentially deadly turtle diseases.

We drove him to the nice lady's house. The screen door was closed but the front door was open so I called in "hello" and a woman came to the door. She was about 40 and had a chicken bone hanging out of her mouth. The lady was not what I expected. She looked more like a biker woman than a turtle rescue woman.

She kept chewing on the chicken bone and said "Jerry! Get out here. The Alameda people are here with the turtle" and walked away. Jerry (her partner in turtle love?) came to the the front door with a smile that showed off his 2 or 3 remaining teeth. Hey! Jerry! Hi!

I said, "This is really interesting! You guys save turtles?" He gave me a look that said I was really dumb as in stupid, not speechless, and said "Uh, yeah." He told us what kind of a turtle Albert was and we asked him a few questions. Okay, mainly, he wanted to go back and chew on chicken bones with the turtle lady so he looked at us like we were stupid and boring.

Before we said our last goodbye to Jerry and Albert, I asked Jerry if he liked him. He said "Sure", but I'm not positive he meant it. As we drove away, Alex said "I'll bet they will just make him into some turtle soup."

Sometimes I hate Alex.
Posted by Linda Medrano at 8:11 PM No comments: 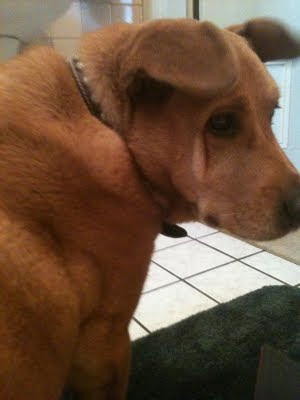 Taking a bubble bath is never a private affair for me.

Harry has decided that I need protection whilst I am performing my ablutions. He parks his rather formidable self right next to the tub and watches the doorway for intruders while he looks at me with curiosity.

I do make my bath sort of an occasion. I bring my iced tea (or Diet Coke), my telephones, my husband's iPad, my Kindle, my potions, and spend the time lollygagging. Harry watches me and tries to discern why I seem so content just sitting in a tub full of bubbles and water.

Even the most circumspect of guards can only do this kind of duty for so long. Harry gets a little bored and a little tired after a half hour or 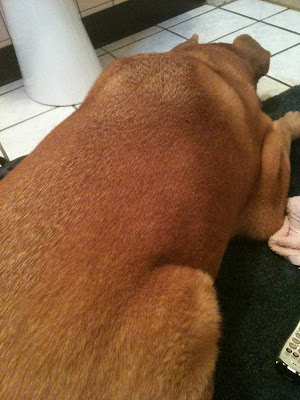 As a result, he stretches out on the 6 foot long bathmat for a little "catnap". Being as protective as he is can be quite exhausting as I'm sure you can imagine.

Sometimes Harry's nap determines how long I spend in my bubble bath. He is not inclined to wake up and move just because I want to get out.

We have all heard that most accidents happen in the home. And the bathroom is the most hazardous place of all. Trying to get out of a tub and step over Harry might be tricky so I usually just wait. Eventually, he wakes up and resumes his post. 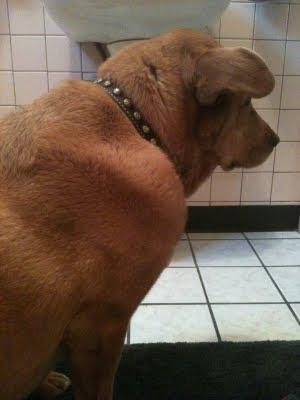 With his renewed energy, it's easy for me to step on to the mat and get dried. Harry waits until he's sure I'm finished before he leaves the bathroom.

I seldom feel anxious when I bathe even though for many years after seeing the Alfred Hitchcock film "Psycho" I was unable to shower alone in house. I kept envisioning crazed killers with knives wearing mama's flowered dress.

Today I have no such anxiety.
Posted by Linda Medrano at 1:40 PM No comments: 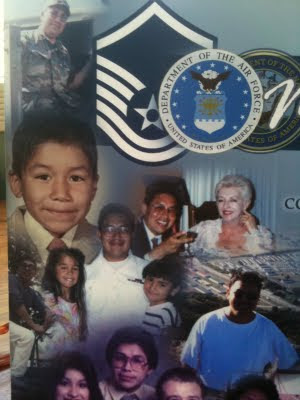 Can you pick out the non-Navajo in this photo?

I take the occasional trip with Alex to see the family in Arizona. We sometimes stay with Alex's mom when we go. I love my husband's family and there are a lot of them to love.

Sometimes it's hard to tell who is who because they all look a lot alike. Add to this, the Rez Navajos that sometimes come down to Phoenix from the Navajo Nation. These guys are perfectly happy camping in the backyard for a few months. When we visit, I sometimes feel like I stick out like a sore thumb.

I catch people looking at me with a kind of fascination and it's not just because of the blond hair. Sometimes I'm glad I'm not fluent in Navajo because I might get my feelings hurt if I was. If they find me "interesting", I have similar reactions to them.

Alex's mom will give me a sanitized version of things, but then takes her son off to tell him "the real deal". The two stories are usually not particularly compatible. Alex's sisters are warm and friendly to me, but I'm treated with a "protective" attitude. Girls! I can handle the truth! Really I can! Distant relatives sometimes are "squished" by machinery, and I'm told they had a little accident. (Yes, I hate the idea of anyone being "squished" but I could be told that too.)

If I answer the phone when Alex's family members call, I'm told everything is "fine". Then Alex gets on the phone and his side of the conversation consists of "Oh no!" "Oh my God!" "Is he all right?' "Oh no!" "Did the police come?" "Oh no!" "You're kidding! Oh my God!" After 20 minutes or so of this, the phone call ends.

Go figure!
Posted by Linda Medrano at 11:15 AM No comments: