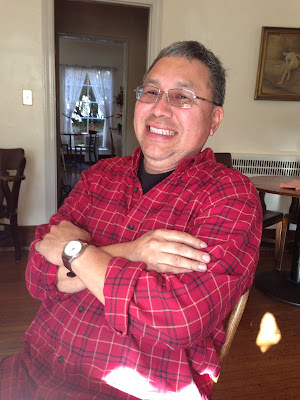 Alex walked in the office when I was looking at the whole internet and said "Put it in your mouth!  Do it!" to me.  He was holding something in his hand.

I looked at him and wondered if he had lost his damn mind.  He reached his hand toward me showing me a nasty little piece of chocolate that he had saved off of a chocolate Santa Claus we gotten from a friend at Christmas.  Alex had eaten everything but the head of the Santa.

I said "Put it in my mouth?" and he started grinning.  He is one sick bastard, that one is.

Alex needs to keep in mind that we are married and have been for many years.  The demands to 'put it in my mouth' are pretty funny at this stage of the game.

Plus, I don't want some nasty piece of chocolate he's been holding and letting melt in his grubby hands.  And where does he get off saying "Put it in your mouth!  Do it!" to me?

Well, unless he's holding  a big bunch of hundred dollar bills in the other hand.

Then I might think about it.  Naw.  Just kidding.
Posted by Linda Medrano at 5:37 PM 43 comments: