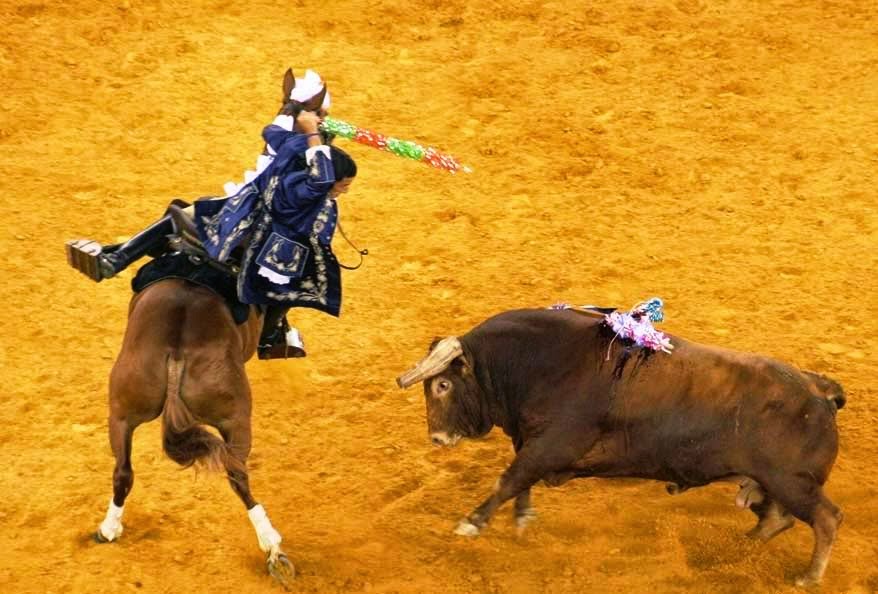 In 1974, I was in Mazatlan, Mexico for a short honeymoon with a short-term husband.

I saw the posters for the bullfight posted all around the Plaza, and decided that it was a spectacle that I really wanted to see at least once.  My blue-eyed blond husband wasn't particularly enthusiastic about the venture, but I finally wore him down and he got us event tickets for the next day.

The seats we got were in the shaded area of the stadium and we were not exposed to the blazing Mexican sun.  The first ten minutes were full of pageantry   I was enjoying the marvelous colors and the ritual of the opening ceremony, and enjoying myself until I became aware of the first sighting of blood on the bull.  I expressed dismay, but my husband insisted that he had "shelled out good money" and said we were staying for the entire bullfight, like it or not.

I stopped watching the travesty in the ring, and began watching the other attendees.  Most of the local Mexicans had the cheaper seats in the sunny area of the arena.  They were keeping hydrated with copious amounts of tequila, swallowed directly from the bottles they were pulling from pockets and backpacks.

Since it looked pretty unlikely that the bull would gore the matador, I excused myself for a restroom break.  I did take a moment to touch up my lipstick and then headed for the bar.  I ordered a margarita and was soon approached by a handsome young Mexican guy.  We chatted in both Spanish (mine is halting) and English (his was abysmal), and spent about 15 relaxing minutes getting acquainted.  I saw my husband walking in the crowd looking for his bride with a touch of fury in his eyes.  I bid Angel (pronounced Ahn Hell) adios and hurried over to meet my spouse.

I explained my delay by saying that the brutality of the sport really had upset me and I was just trying to compose myself before I returned.  (Actually, I had considered running off with Angel, but I doubted that he had serious intentions toward me beyond an hour or so of entertainment.)

My husband was angry.  We left the arena and the bullfight.  I got my wish..  Even better, I got a divorce.
Posted by Linda Medrano at 6:57 PM 23 comments: