"I Don't Smell Funny Either"

Last evening, Michael from Too Many Mornings and I were exchanging a silly email and the words "I don't smell funny either" were written.

It set me off telling him a little saga that had occurred the day before. Michael said it would make a good post, so here goes.

I had lunch with a girlfriend on Tuesday at Jack London Square in Oakland. After lunch, we went our separate ways and I was waiting for the bus to go home.

A homeless man walked over and sat down next to me on the bench where I was seated. I wasn't sure he was homeless, but he was wearing a pair of bermuda shorts over a pair of sweat pants and he looked like his clothing was layered.

It has been about 75 degrees in the Bay Area since Monday. The man asked me "How do you like this weather?" I told him that I loved it! He went on to tell me that he was from New Orleans originally but had lived in Oakland for the last 40 years. I responded that although I love New Orleans, the summers are dreadful because of the heat and humidity. He agreed.

The man then said "I like the way you're dressed" and I thanked him. He asked me if I worked in Oakland and I told him that I used to, but now I am retired.

I asked him what he did and he told me that he had trained Arabian horses for many years, but that he was currently homeless. I said "There's a lot of that going around." He agreed, but also said "I trusted the wrong ponies and the wrong people." I nodded my head at him.

I laughed and said "Not very many" and we both laughed. He looked at me still laughing and said "You're funny!" so I said "No, you're funny!" and we continued giggling.

"Why are those guys in cars all looking over here?" he asked. I responded "Oh hell, Honey, who knows!" and we cracked up again. He told me his name was Ron and I told him my name.

I saw my bus coming and I quickly slipped him a bill and told him I had enjoyed meeting him. I got on the bus, found a seat and saw Ron sitting on the bench in the sun looking at me smiling.

He blew me a kiss and I blew one back to him. It was worth the ten-spot.
Posted by Linda Medrano at 6:48 PM No comments: 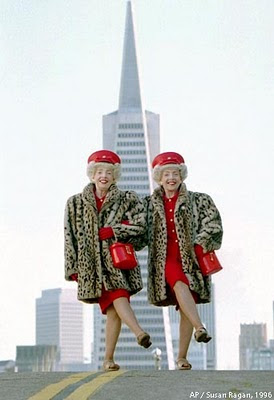 If you've visited San Francisco, you may have seen a fairly wide range of colorful characters.

Identical twins, Marian and Vivian Brown were born on January 25, 1927 in Kalamazoo, Michigan. I began seeing them around town in the mid 1970's. They were pretty hard to miss.

The women dress identically and in their own distinctive style. They have identical hairdos, identical arched eyebrows, as well as identical smiles. They are greeted like royalty by San Francisco residents and business owners. Tourists frequently gawk and want to photograph the pair.

The Brown sisters are possibly a little goofy, but in such a delightful way, who cares!

The last time I saw them was in a restaurant in Union Square a couple of years ago. People came up to them and asked for their autograph and they cheerfully complied. 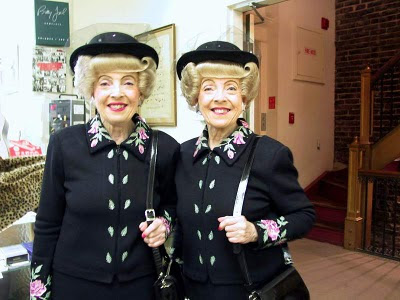 I love that some people can bring a smile to so many faces just by being themselves.

If you do visit San Francisco, keep an eye out for them. Be sure to say hello. They will smile and give you their "queenly" wave.

I hope they are around for a long time. They always make a foggy day a bit brighter.
Posted by Linda Medrano at 6:55 PM No comments: