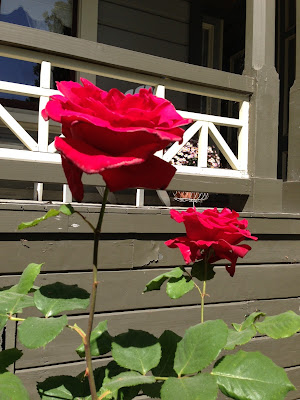 My single red rose bush has given us two very distinctive types of flowers this year.  In the top photo, you see deep red roses the approximate size of dinner plates.  There are six of them.

In the photo below, there are about 50 small roses, a paler color, and the size of drink coasters.

I really never considered the sex lives of roses, but now I feel I must.  It seems rather apparent to me that some rose has been spreading his or her pollen in a new bush. 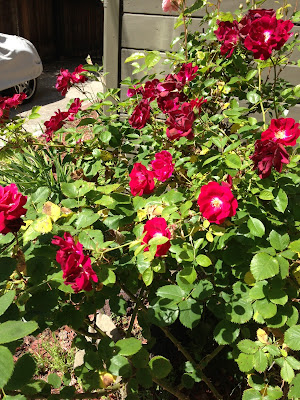 Now, I know flowers are the result of some kind of pollen spreading routine.  I don't think actual sex occurs, but I've never watched the roses at night which may be why I don't see anything sexy happening.  There is something going on that isn't exactly kosher.

First of all, this is not a new rose bush.  It's been here for 10 years or so.  This is the first year there has been any suspicion of infidelity on my part.  In every other year, the roses have been pretty much the same old thing.  Just roses.

I'm wondering if I should do something to try and soothe tempers out there.  I mean, having babies that are a lot different from what you expected probably causes some traumatic hurt feelings.

I hope the plants lives through this experiment in infidelity.  Some do, you know.  Some don't.

How The Internet Damn Near Killed Me Today 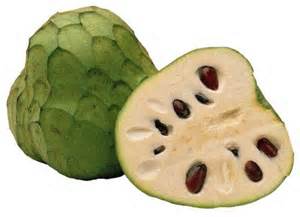 I love exotic fruits and vegetables.

The first time I tried "Dragon Fruit" I was sold on this weird looking cactus family thing with the hot pink flesh.

When I was at the store last weekend, I saw something very interesting called "Cherimoya".  The sign said to slice the fruit and remove the seed and "enjoy".

I stuck the weird looking fruit in the bowl with bananas and waited until it had softened a bit.  I don't usually eat breakfast, but decided this exotic fruit would be a perfect choice for my lunch.  I carved it in half and then proceeded to eat it with a spoon, after clearing out the obvious seeds.

It tasted like a vanilla custard and I was delighted.  I was forced to sort of spit out some of the seeds as they were spread willy nilly all through the fruit.  I may have even missed one or two.  No big deal I figured.

I looked up the cherimoya fruit and read about the taste and the origins (the Andes, I think), and thought to myself, "Dang!  I wonder why this isn't more popular!  It's delicious!

I saw a heading called "Cherimoya seeds" and decided to read the article.  I was expecting some quirky little recipe that would turn these seeds into a tasty treat!  I was sort of stunned when the article discussed how DEADLY POISON the seeds were.  In fact, these black seeds are used to make an insecticide.  About that time, I began to perspire and my stomach felt very weird.  I had hot and cold flashes as my kidneys began to fail and my hair and teeth started falling out.  (Okay, I'm lying, but I really was having a hissy fit!)

Now don't get me wrong, I didn't "eat" the seeds.  But a small one might have slipped down my gullet.  I just wasn't sure.  I thought about going to the ER but then realized that it would probably be too late by the time I got there, and they would charge me a $250 co-pay.  Screw that.

I thought long and hard about it and decided to call the "poison control" people and ask them what to do.  I called the number with shaking hands and spoke to a really nice woman who had never heard of Cherimoya.  But she was nice and calm and said, "Let me just look it up and see what's what."  Very calmly, she said, "I think you are okay though."

I did feel a lot better though.  I quit sweating and my hands quit shaking and my kidney failure seemed to stop.  My teeth and hair aren't falling out either.

Life is good.  Ignorance is bliss.
Posted by Linda Medrano at 7:49 PM 50 comments: