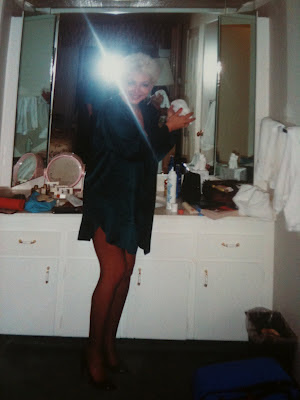 I have good legs.

I have to say that the first thing one of my ex-husbands noticed about me were my "little skinny legs". He called them "toothpick" legs. I bed to differ. These legs are damn good legs.

Unfortunately, that is not enough to get me a bus ride across town. Well, actually, that's not true. I do have bus drivers who are very fond of me and my legs, both men and women.

I've always had a soft spot for bus drivers. I don't really know why. Maybe it's the uniforms. Maybe it's because I see them as taking responsibility for a bunch of different people.

When I was about 25, I had a bus driver named Joe who would actually park his bus in front of my apartment and come up and knock at my door if I was running late. He would also grab one of my kids and carry them out to the bus so I could take them to their respective childcare places on my way to work.

This same bus driver came to my place for Christmas more than once. It pays to have friends in high places!

One morning, several years ago I was on a bus in San Francisco. The bus driver called me up to the front of the bus and told me he had a call for me. I took his phone and it was my old bus driver Joe who had seen me getting on this bus. I was flabbergasted but delighted. He said he was pretty sure it was me, and then he saw my legs and he knew it was me.

I commuted by bus from Alameda to San Francisco for several years. One young lady bus driver was having a legal dilemma and I wrote letters for her to help her with her situation. This young lady on occasion would hijack her entire busload of people to take me to my home even though I was not on the bus route she drove.

Another bus driver, a man, liked me and gave me free monthly bus passes. that other people had on his bus. Hey! Commuting isn't cheap!

But, damn it, I always like my legs!
Posted by Linda Medrano at 4:02 PM No comments:

"It's Just What You're Stuck With" 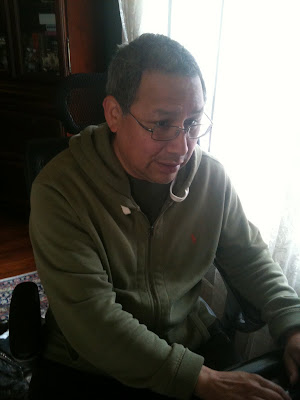 We were having a very early morning conversation.

Still in bed, thinking about getting up, I asked Alex the following question.

"Honey, isn't it weird that both of your sisters married Mexican guys? Isn't it weird that you had a serious girlfriend who was Mexican before marrying me, your Mexican wife? It seems funny that none of you got involved with Navajo partners, considering that you are Navajo."

Alex took a moment to ponder my question. He looked at me and said "It's just what you're stuck with."

"It's just what you're stuck with?" What on earth does that mean? He's stuck with me? I don't understand this at all, but I'm not liking the sound of it much. Does Alex mean that I am what he is stuck with? Is that a loving or kind thing to say to your simple Mexican wife?

I was spluttering a bit at his response, ranging a bit between laughing and smacking him up along side his head. Alex went on to explain what he meant. Growing up in Phoenix, he did not live in the same area that most of the Navajos lived. Alex and his family lived in a house in racially mixed areas but many Native Americans lived in apartments in a different area of town. As kids, Alex and his sisters hung out with Mexican, Asian, White or Black kids.

While Alex spent time with his cousins on the Reservation every summer, he was viewed as a "City" kid by them. Alex had very different life than his cousins on the Rez. Alex's Dad, Fred, was a self proclaimed "Red Apple". He said he was "red on the outside, but white on the inside". Fred spent time in the Marines and I think he was actually "red, white and blue" on the inside. Fred really wanted his children to assimilate into the population at large and not get into a mentality that was prevalent in Arizona where Native Americans were considered to be second class citizens. (Has that changed? I doubt it.)

Alex's Mother, on the other hand was much more "traditional" Navajo. She still is for that matter. She wanted her kids to speak Navajo, go to "Indian School" and embrace their culture above all. His Dad wanted the kids to be Americans first. Neither of Alex's parents got exactly what they wanted, but I think they got the best of both worlds.