Sex in the Fish Pond 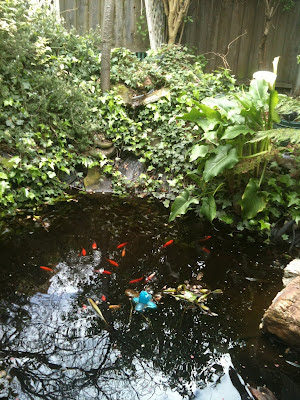 We started out with ten fish. Now we have about 30.

There is only one way this could happen, and I guess we all sort of know what that one way is. These fish must be having sex. We used to have an aquarium and it was very easy to see the fish mating. At first I thought they were fighting, but no, it was soon evident that lots of baby fish were being born all the time.

Unfortunately, the baby fish were frequently eaten by the mature fish even with having plant life in the tank where the babies could hide. Still, some of the babies flourished and grew up to be just as cannibalistic as their parents.

The fish do quite well in the pond and there is a lot of plant life around to hide them from predators. We also have Harry and Zoe who consider the fish to be "their" pets, and they will both chase off the occasional egret, hawk or seagull who drops by for sushi lunch from our pond.

I cannot help but wonder if one fish is particularly attracted to another because of physical beauty, or it could be purely a personality thing. Do black fish mate with white fish? Do silver fish mate with red fish and yellow fish? When I had a tank, it seemed to me that the fish were mating all the time or at least with a lot of regularity, but sometimes it was hard to keep track of who was zooming whom.

I'm reading a book that a friend recommended to me as "steamy". When I asked her to tell me a little about it, she said "It's about a 21 year old virgin who gets involved with a handsome young multimillionaire who is into bondage and domination but then they fall in love. (Okay, what's not to like so far?) I began the book which is titled "Fifty Shades of Grey".

It certainly had all the sex scenes I expected and that's fine. Actually, I got a little bored with all the sex and sort of skimmed ahead to try and find a bit of plot. The thing is, this book has me unable to suspend my cynicism. These two people are having sex every fifteen minutes round the clock.

I have had several periods of hyper-sexuality in my life. Perhaps we all have. But the truth of the matter is that how can one believe that anybody is having even kinky sex every 15 minutes and thinking about sex at every moment they aren't having sex. I just don't buy it.

Plus, bondage, spanking, flogging, and such is all fine, but you really can only describe it so many ways. I think I was hoping for something a little more "unusual".

Know what I mean?
Posted by Linda Medrano at 3:47 PM No comments: 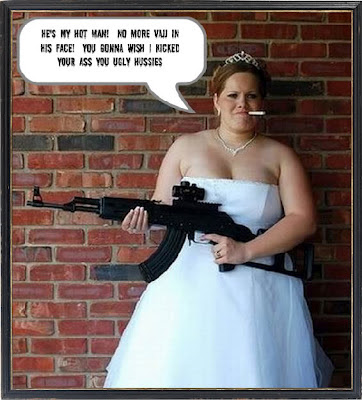 Lord knows I have had enough practice. The first time I got married, I was 19. That one didn't work out real well. Neither did the next one.

Alex and I were driving up to Lake Tahoe to get married in September of 1989. By the time we reached Sacramento, I realized that in my haste to leave, I had changed bags and didn't have an Identification card with me, although I did have some credit cards, a checkbook, and my library card.

Since we were over half-way to our destination, I figured we'd just go ahead and see what happened. We were both a little nervous and on edge anyway, but we had already rented the condo and made the commitment to get this done.

We checked into our condo, and found a local chapel who said they would marry us even without my proper identification. The ceremony was actually quite nice. The minister used some kind of an Apache prayer as part of our service. Our witnesses were the man and his wife who owned the chapel.

For a charge we could have the recording of the wedding ceremony but we decided we didn't need that. Nor did we opt for the photo package. We just wanted to get hitched and get out of there.

We both let out a sigh of relief when it was over and left the chapel. Across the street, there was a chain restaurant called "Carlos Murphy's". We went directly to the bar and ordered two double shots of tequila. We tossed down our drinks and returned to the condo.

We ordered a pepperoni pizza and watched a movie. I remember it was snowing and very cold outside. I slipped into my gold lame Bob Mackie teddy with the matching robe and sat around looking glamorous for a while we drank champagne and watched the snow fall and waited for our pizza.

It was my best wedding ever.
Posted by Linda Medrano at 2:09 PM No comments: