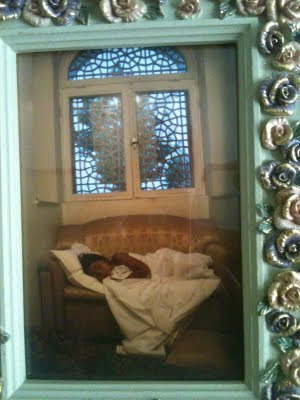 When my daughter told me she and her husband were taking the kids to Iran for a month, I think I screamed!

My daughter's husband is Persian and he has family in Iran. This was a few years ago, but the tensions between Iran and the US were at a boiling point.

I seriously questioned their sanity in taking children there. I was assured they would all be "fine". I rented a copy of the old Sally Field movie "Not Without My Daughter" and watched it over and over with a sick feeling in the pit of my stomach. "Fine?" This looks "fine" to my daughter?

I was somewhat surprised that my daughter didn't mind wearing the prescribed head covering and long tunic type jacket whenever they went outside. Fortunately, my little granddaughter was too young to be required to cover up.

My daughter converted to Islam when she got married. She is fluent in Farsi, (and Arabic, and French, and Korean for that matter), but she is a blue eyed blond.

I was sure she and/or the kids would be kidnapped at the very least and held for ransom. Worst case scenario, they would be killed by people saying they were "infidels".

I also worried that my son in law would be put in the Iranian Army. I worried too that they would all get very ill from the water and food in Iran.

Oddly, none of those dire things I worried about happened. In fact, they all had a wonderful trip and came home giving the place rave reviews. Apparently, it's a beautiful country with lovely people. Who knew?

The most dangerous part of the trip was on the highways since Persians are crazy drivers.

I've ridden in the car with my son in law so this comes as no big surprise to me.
Posted by Linda Medrano at 3:14 PM No comments: