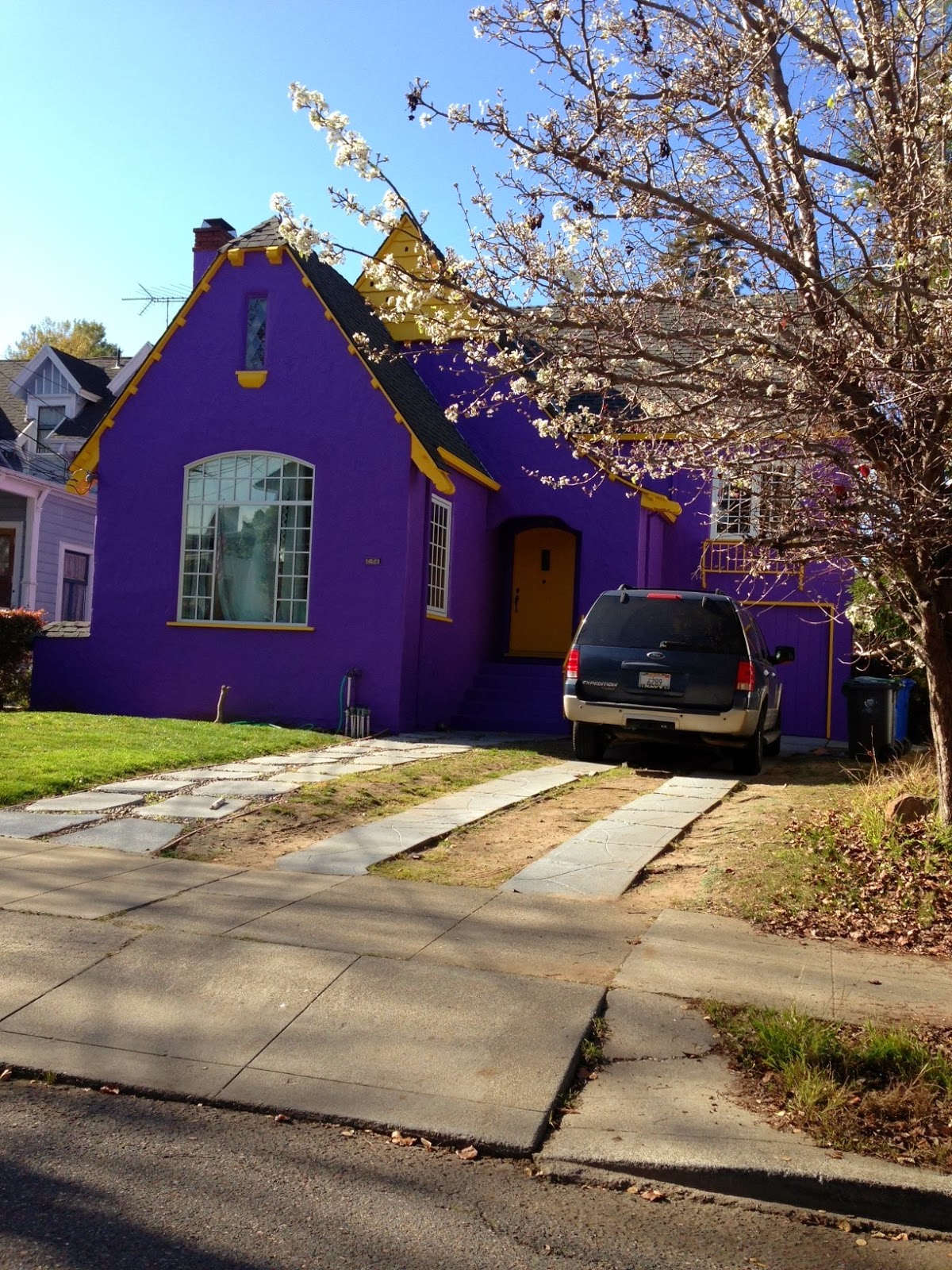 What were they thinking?

My neighborhood has just taken a huge property value hit.  When you look at this house, don't you have to think that insane people must live there?

This is not an ugly house.  But to paint any house with a color scheme of purple and bright taxi-cab yellow is simply a crime.

I shudder every time I look out my window.  The outrageous color scheme makes me feel violated and violent at the same time.

The house is directly across the street from me.  I'm thinking about only going out my back door and climbing the fence to avoid looking at it.

Most of my neighbors haven not commented on the house.  Maybe I'm the only one bothered by this monstrosity.

Or it could be that this is just a dream.

For more dreamers, check out "We Work For Cheese" to see what other contributors have to say.
Posted by Linda Medrano at 3:09 PM 24 comments: 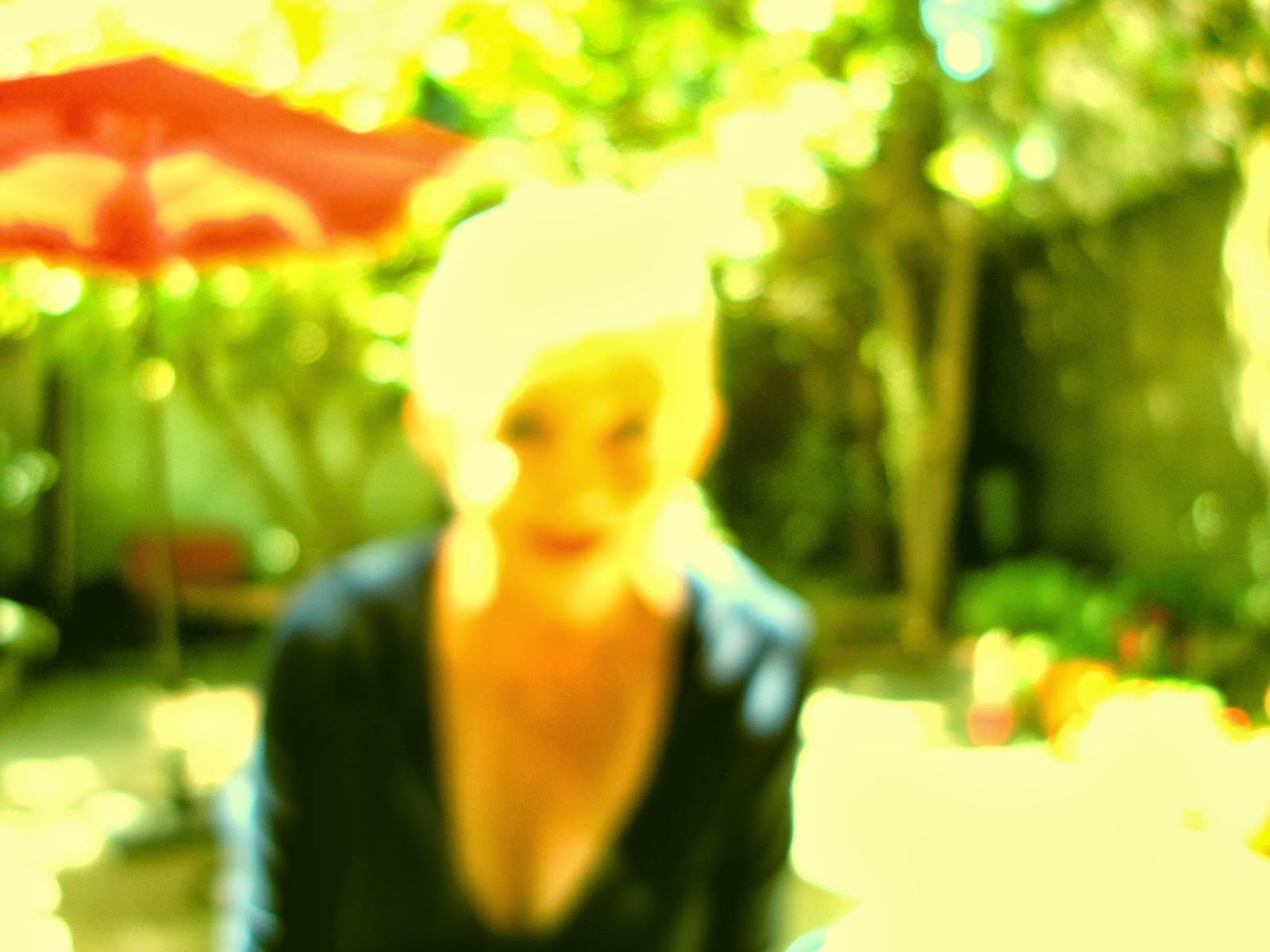 It's all turning around so fast.

No sooner was it summer then fall then winter and here it is spring again.  I'm actually getting a bit dizzy.  My flowers are blooming and it's still winter.

People are walking around in shorts and tank tops and it's only February 20th.

I'm feeling blurry around the edges.

I watched the Canadians beat the USA in Women's Hockey today.  It was weird.  There were 3 minutes left of regulation play and the USA was up 2 to Zip.  There was sort of a time warp thing happening, I'm sure.  Canada tied the game and went on to win it in overtime.  Strange.

I have never in my life followed hockey.  Now I cannot get enough of it.  I LOVE HOCKEY all at once.  I want to go to San Jose and watch the Sharks play.  I want to dye my hair red and get a tattoo.  I want to buy a tortoise.  Something is off.

There is chaos everyplace I turn.

You might want to go visit that lovely OCD girl, Nicky, at We Work For Cheese to see what she and some others think about chaos.
Posted by Linda Medrano at 5:42 PM 29 comments: 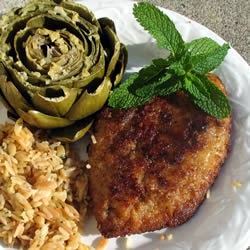 I first had abalone when I was about 16 years old.

Even then, (in the good old days), it was expensive and I have no idea who paid for such an extravagance.  Although I don't remember my generous host or hostess, I will never forget the taste of that sweet tender white fish.

I have prepared abalone a couple of times as it was given to me by divers who peeled the large sea slug off the cliffs of the Marin County shoreline.  I have ordered it occasionally in restaurants but the price of the entree is usually very prohibitive (in the range of $60 - $75).

Abalone is fairly easy to prepare, bread crumbs, egg, a cocktail sauce.  The hard part is pounding it into tender submission.  It takes quite a bit of pounding or the meat will be as tough as shoe leather which was a costly mistake I only made once.

We hosted a dinner party a couple of years ago and I served what some people would consider a poor woman's abalone.  I took boneless skinless chicken breasts and marinated them for 3 days in clam juice after I had punctured the flesh with a two tined fork.  When the day of the dinner party arrived, I pounded the breasts until they were flat.  I coated them with egg, and then bread crumbs.  Then they were placed into a pan of hot olive oil, and about 4 minutes per side.

Taking them out of the pan, I let them rest on paper towels to adsorb any excess olive oil, and then put them on a platter with lemon slices.

My guests were sure I was serving them abalone.  In fact, I had a hard time convincing them that it was actually chicken they were tasting.

At "We Work For Cheese" you will find other ideas about "it tastes like chicken" and maybe even other recipes!
Posted by Linda Medrano at 10:41 AM 25 comments:

I Did Not Have Sexual Relations With That Woman 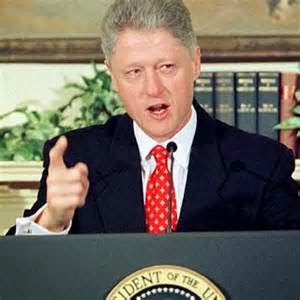 They all do it.

When the going gets tough, politicians are likely to start fibbing.  I don't even find it surprising anymore.

What does surprise me is people in real life who tell lies with regularity.  (I really do not lie unless I feel my life depends on telling a lie.  In the first place, my memory is shaky so I could never remember what lie I told.  In the second place, I really don't "care" enough to lie.)

When Alex was in the Navy, he had a roommate named Todd.  Now Todd was a nice enough guy, but he was truly a liar.  Whatever Alex did, Todd had to one-up Alex.  If Alex got a new car, Todd got a new better car.  If Alex graduated from college, Todd got his PhD from Harvard.  If Alex went to Europe, Todd went on a year long world tour.  Todd lied.  He told ridiculous lies and Alex never really minded.  Todd was visiting us several years ago.  It was during the aftermath of Hurricane Katrina.  Todd was working for PG&E as a CAD operator and told us that he was going to have to go to New Orleans to support the rescue operations.  Alex was in the National Guard at the time and waiting to see if he would be called up to go.

I expressed the thought that I hoped neither of them had to go.  Todd said, "Are you kidding?  I'm dying to go!"  Really?  Yes.  Todd said he would be earning $500 a minute from the time he got on the plane for New Orleans.    Alex just said "Wow!"

I wondered why a CAD (computer aided design) draftsman from Pacific Gas and Electric would be sent to New Orleans.  I also wondered about $500 an hour. Do draftsmen really command that hourly rate?  I left it alone since Todd was Alex's old friend but it really made me wonder.

I have a close relative who is also a liar.  How can I tell she's lying?  Her lips are moving.  This person tells outrageous lies perhaps in the hopes that because the lie is so huge, people just might believe it.  I've never understood the "why" of it.
It may be that insecurity and feelings of inadequacy make some people tell lies.

Actually, I can understand the Bill Clinton's of the world along with the Anthony Weiner's much more easily.  They have something to lose and something to protect by lying.  What I will never understand is the idle lies that nobody gives a damn about in the first place.

For more takes on lies and liars, please check out "We Work For Cheese".
Posted by Linda Medrano at 11:52 AM 24 comments: 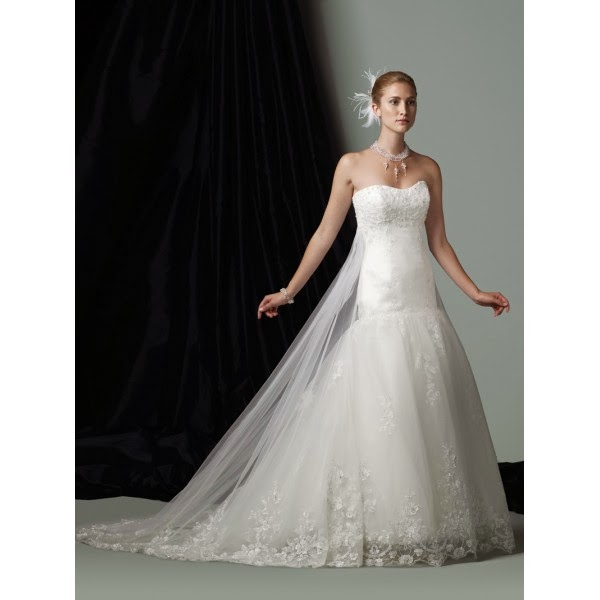 We were invited to the wedding which was held at the Claremont Hotel in Oakland.

The hotel is old, very posh, and very expensive.  The bride was a neighbor woman who had lost her husband a year earlier.  Her groom and she had met on-line on a "Christian" dating site.

Lola and Tom were not youngsters.  In fact, Lola was 65 at the time and I think Tom was a couple of years younger than she.

Lola's deceased husband had left her "very well provided for", which was a good thing for her.

We went to the hotel at the appointed time and hour and we were somewhat surprised that the wedding was a very formal affair.  Lola's dress was strapless, and had a long train.  She also had a maid of honor, and six bridesmaids.  Tom had a "best man" and 6 groomsmen.  The service was not too long, thank goodness.  (I get itchy at weddings having had a few of them myself, but I've never even tried on a real wedding dress.)

It seemed a bit strange that Lola would opt for a formal wedding, seeing as she had been married twice before (as I learned at the reception from a "friend" of Lola's as she whispered to her companion).  Most of the guests were "church" people and they really had a lot to say about Lola finding love on a dating site, marrying a younger man, wearing a formal (strapless!) wedding gown, and marrying almost one year to the day of her husband's death.

The luncheon reception was lovely.  There was music and dancing and the wine flowed.  Some of the conversations turned downright catty to my way of thinking.

Okay, maybe I thought the formal wedding deal was a bit much for someone Lola's age, but damn it, it's her wedding and she could do what she wanted with that.  I started talking about how gorgeous Lola looked in her gown, and how handsome Tom was in his tuxedo.  I also admired the big rock she had on her ring finger.  The other people at the table quit sniping at Lola and concentrated on eating the food she had so generously provided and drinking the wine she was paying for.

Yeah, I was faking it.  I didn't really love the dress.

For more "faking it" posts, check out the list on We Work For Cheese.
Posted by Linda Medrano at 5:16 PM 15 comments:

It makes me feel like a dolt to admit that I don't like or even "get" Shakespeare.  I have never enjoyed hearing, watching or reading his words.

From what I have had forced on me in school, etc., I think Shakespeare was a full of it.  Romeo and Juliet?  Bullshit.  Hamlet?  Crap.  The Tempest?  Shoot me now.

There are a lot of writers I really admire and love.  Shakespeare isn't one of them.  To be or not to be, that is the question.  Excuse me?  That's not my question and it never was.

Now go check out the other entrants who are much more literate than I.  We Work For Cheese has the links.
Posted by Linda Medrano at 3:39 PM 20 comments: