Superstitious I am not.

I had a black cat.  I once got married on a Friday the 13th (okay that one didn't work out so well), and I stepped on many cracks without hurting my mother's back.

There is only one place that I get a little hinky and that's where it comes to sports, or baseball, more precisely.

My SF Giants are in the playoffs.  They lost the first two games putting them in a hole that had never been climbed out of by a National League baseball team.  (The playoffs are the best of five games.  Two down is a deep hole.)   I was quite concerned that they might be eliminated from the playoffs which would happen if they lost one more game.  I was really praying this would not happen,.

On Tuesday, Alex came home from work early to watch the Giants play the Reds in Cincinnati.  .  I had put on a pair of ugly old black yoga pants and an orange tee shirt (Giant's Colors) to watch the game.  I was so tense that I felt like I might crack my spine if I moved.  Alex was drinking beer, but I stuck with Diet Coke, promising myself a glass of nice red wine IF the Giants won the game.  The Giant's squeaked by with a 2 to 1 win over the Reds.  With this win, the Giants were still down 2 games to 1.

On Wednesday, Alex came home early again to see the game.  I put on my same black yoga pants and the same orange tee shirt but also wore the same underwear I had worn the day before.  I put on the same earrings I had worn on Tuesday and drank Diet Coke.  Before he thought about it, I had opened a beer for my husband.  Everything had to be just the same as the day before, right down to Alex's 3 beers.  The Giants won by a score of 8 to 3.  We were thrilled.  Again, I rewarded myself after the game with a glass of red wine.

My friend Nelson had asked me to have lunch with him on Thursday.  I told him yes, but then I reconsidered.  The Giant's had won two games and needed my complete support to win the next game.  Alex informed me that the game would start on Thursday at 10:15 AM our time, and that since he had a morning meeting, he would not be able to stay home for it.  I was in full panic mode.  If we didn't do the same things, it would be our fault if the Giant's lost today's game and were eliminated from the chance to go to the World Series.  I telephoned Nelson and lied, telling him that Alex would be home from work to watch the game.  (I couldn't invite Nelson to watch the game with me, because that would have been too different.  Telling the lie sort of made it like Alex was home drinking beer and watching with me.)

I got up this morning and struggled into my used underwear for the last day.  I put on my tired old yoga pants and orange tee shirt and the same earrings.  At 10:15 AM, I opened a Diet Coke and stuck a straw in the can.  My friend Marina called me and asked if she could stop by.  I hesitated but ended up saying okay.  She wanted to eat some of the beef stew I was saving for her before she went to work.  This little variation troubled me quite a bit.

The score had been 6 to 0 Giants before Marina called.  When Marina arrived, the Reds scored two runs.  I was in a huge hurry to get her out of the house.  She thought I was kidding.  I was not.

The Giants ended up winning the game by a score of 6 to 4.  I was so glad I didn't cause them to lose. Because they won so early in the day and they won't play again until Sunday when they will either play the Washington Nationals or the St. Louis Cardinals, I went without the red wine.  I hope that wasn't a mistake.

I was also very happy to change clothes, including underwear.
Posted by Linda Medrano at 4:07 PM 55 comments: 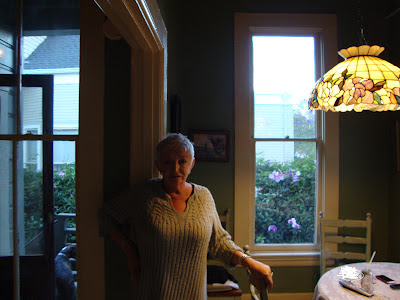 At least this time I didn't have to fake that I had a ruptured appendix.
Posted by Linda Medrano at 8:40 PM 45 comments: