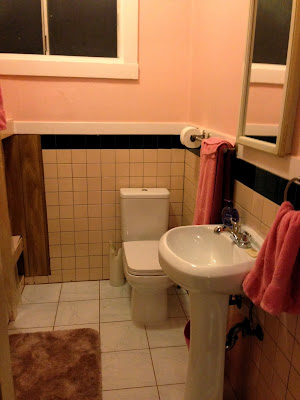 You may already know, I'm having some remodeling done.  We have a new floor, new paint, a new sink and a new toilet in one of our bathrooms.

We bought a toilet from Home Depot and on the way home, I told Alex I wanted to drop by the Jack London Kitchen and Bath showroom just to get some ideas.

When we walked in, there were about 15 toilets right near the entry, all of them rather upscale looking.  There was a sign that said "All Display Toilets $100".  Well, goodness me!

We had just paid about $200 at Home Depot for a toilet.  This was a much better deal.  Alex wanted a rather squared off looking toilet and I agreed that it was nice.  It turns out this is actually a $700 toilet.

I never imagined such an expensive toilet even existed.  I mean really!  Isn't a toilet just a toilet?  Yeah, this was "stylish", but I had never even considered a "stylish" toilet.  Go figure.

So after owning the Home Depot toilet for about a half hour, Alex returned it to the store.  The sales clerk seemed surprised that he was returning a toilet after a half hour.  He said she looked at him suspiciously.  (I think he's paranoid.)

Since I don't spend a lot of time thinking about toilets (at least until now), it never occurred to me that this toilet's dimensions might not be the same as our previous toilet which was sadly somewhat broken.  After Guy, my contractor, installed the toilet, he called me in and told me that it was too close to the wall.  Apparently, the toilet was larger than the one we were discarding.

Since the hole in the floor for the toilet was there already, there really wasn't much that could be done.  I went over and sat on the toilet and said, "Well, it's fine for me!"  Guy agreed, but added, "Not a place for big people though," and he was right.

When Alex arrived home, I pointed out the problem to him and in his usual optimistic way he said, "Well, we'll just tell everyone this toilet is only for the beautiful people!"
Posted by Linda Medrano at 8:13 AM 44 comments: 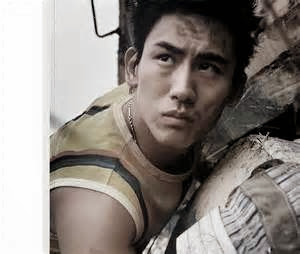 He's a perfectionist.  He never cuts corners.  He's ethical and fair with his prices.

Guy has rebuilt a porch for us.  Guy has built out a pantry for us.  He is dependable and takes pride in his work.

Alas, my cheating ways have put a crack in this relationship.

Guy is so good that he has become very busy.  Unfortunately for us, he now has to put us off because of his busy schedule.  I really don't like being pushed back after other clients.  It makes me nervous to have projects lined up and no end really in sight for some of them.

We need a dedicated power line for our new refrigerator and a new outlet put in.  I cannot wait any longer, so I called an electrician who is going to do the work for us.  I tried to time the appointment with the electrician so it would be after Guy had left for the day after working on our bath remodel.

As luck would have it, the electrician came early, and Guy was leaving late.  The look Guy had on his face when he saw another contractor made me feel like a cheating slut.  Guy looked so betrayed and  I felt such remorse and shame.  I felt worse than if my husband had walked in to find me in bed with another man.  That is how bad I felt.

I tried to explain to Guy that it was only an electrical outlet, but that didn't take away the sting.  He was so hurt.  I felt like a total sleazy slut.

Then to show how truly rotten I am, later that afternoon, I hired another painter to come in and paint the bathroom that Guy had remodeled.  (I'm lying to Guy and telling him that Alex did the painting.)  I feel bad about this lie too, because I very seldom tell a lie.