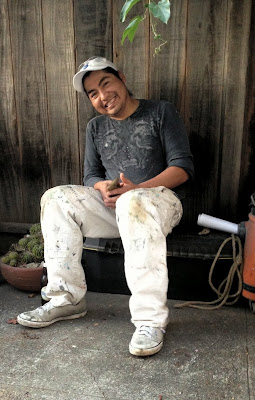 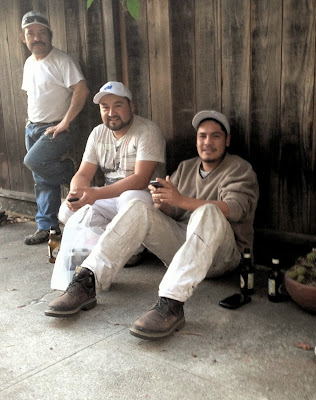 I admit it.  I am a sucker for a pretty face.

I've never found suit and tie men particularly attractive.  I like a guy who is not afraid to get his hands dirty.  I also love men who work hard at physical labor to support their family.  I find that extremely attractive!

I also am partial to Mexican men.  They are almost without exception good looking and courteous.

I first met Edgar and Omar when they showed up almost an hour late to powerwash my house four weeks ago.  I had been dealing with electricians, interior painters, color consultants, appliance deliveries, and a wide breadth of contractors who either showed up late or not at all.  I was fuming when I went out to talk to the guys and yell at them for being late.

Edgar, the guy in the top photo, just laughed as I raged at his brother, Omar, (middle of bottom photo).  Omar was trying to explain that a piece of equipment had been broken and had to be replaced and that he was sorry.  I ranted for a couple more minutes until Edgar's good humor had me laughing too.

I asked the painters, "Are you guys Mexican?" and they replied that they were.  I told them I am Mexican too, and they seemed a bit surprised.  To me, this sealed the deal.  From that moment on, these young Mexican men were more family than strangers.

Two more guys, Antonio and Luis, came to join them a couple of days later.  They were both very nice too.  These guys worked their butts off from 8:00 AM to 7:00 PM, scraping and patching this old house to get it ready for painting.  They all wore what looked like Hazmat suits and masks because this is dirty hard and dangerous work.  After the scaffolding went up, the men would perform high wire acts outside the windows of our two story (with full basement) home.  They flew up the side of the house like Spiderman!

Their radios played from 8:00 AM until night time and I listened to Mexican music while the guys sometimes sang along.  I loved that they seemed to work so well together and there was a good deal of laughing as they toiled.

On Fridays and Saturdays, after they had worked for about 11 hours, we brought them a twelve pack of beer.  They sat in the backyard, sometimes with a little television on and watched their beloved soccer while drinking Coronas and talking.  (We later found out they actually enjoyed Belgium beer even more and so we switched it up.)  After the first couple of times, Alex and I joined them for a drink before they packed up for the night.

Initially, I had worried a little that Edgar and Luis (lower photo, far right) might be under age, but then when I questioned them, Edgar is 27 and Luis is 24.  So I wasn't breaking the law after all.

After four weeks, the painting is complete.  We are delighted with the marvelous job these guys did in painting the outside of this 1880 Victorian home.  They were meticulous and professional.  They were funny and charming.

And yes, they were a treat for my eyes too!