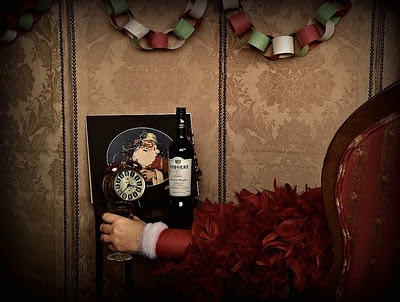 It seems I spend a lot of my time doing just this.

My girlfriend, Erica of Free Fringes, sent me this photo because it reminded her of me. (photo credit).

It reminds me of me too!

I have spent a lot of time in the last year sitting in my Victorian house, with a glass of fine red wine, waiting for Santa (aka Alex) to come home. I sip the wine and the deep red color of it stains my lips. It sometimes makes waiting so much more bearable.

When Alex returns home, he brings me jewelry, baubles, bangles, and stories of his travels.

While he's gone, I dress most every day in my finery and await his return. Sometimes, I feel like my name should be Penelope. Usually, I know when to expect him, but not always. That uncertainty makes it difficult for me to have any kind of rendezvous when he's away.

Not that I intend to have illicit encounters, because I don't. But if one should occur just out of nowhere (it could happen), I could wind up being "caught" by my husband. And frankly, "caught" is not my favorite position.

Of course, I could go elsewhere for a rendezvous, but then I'd be leaving my dogs alone and I'd rather not do that.

I get into a melancholy state when my husband is away for too long. I begin to feel like someone trapped in a prison of my own making. I stop answering my phone. I stop opening the front door when someone knocks. I peer out the window through the lace curtain and watch people go by. Then I make up stories in my head about who they are and where they are going.

I need to stop "waiting" and start "living".
Posted by Linda Medrano at 1:56 PM No comments:

Got The Flowers On The Wall 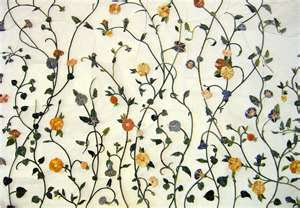 I pride myself on having fairly good taste.

I have what most people think is a lovely home, nice furniture, and some really wonderful art.

You'd think I was somewhat clever at the way I put things together. Actually, I think I've always known what would be nice, but until the last 10 years or so, that would come as a major surprise to a lot of people.

I've always been a touch whimsical about what I like. I might see something charming in a photo and think, "I can do that!". Okay, that's already where things might start to go downhill.

Once when I was a young bride of 22, I saw a lovely photo where someone had arranged some beautiful flowers on a wall for a wedding or something. I thought to myself, "Self! That would look great in my kitchen!". I went to the store and found and purchsed about 100 plastic flowers. I came home and stared on my "amaze and delight" your husband project. One by one, I glued the flowers to a wall in the kitchen. The problem was some of them fell off the wall even with the glue. So, I got some thumb tacks and that worked somewhat better, (until I ran out of thumb tacks. I then improvised and grabbed a handful of nails. I stuck those flowers from top to bottom all over one kitchen wall.

Sweating and swearing, I completed my project. I walked out of the kitchen and walked back in. Somehow, this project had missed its mark. It looked nothing like the photo in the magazine. Still, since I had spent about 8 or 9 hours doing this, (and at least $100 in plastic flowers), I determined I would leave it up for my husband to see.

When John got home from work, he walked in the kitchen and exclaimed "Holy Shit! What happened?". Of course I felt hurt and somewhat betrayed. Couldn't he see the effort that went into this. (Never mind that we would have to repaint and cover holes in the plaster when the mess finally came down after about a month.)

I have a sister. She is an expert decorator and she does amazing things on a strict budget. She has one wall in her kitchen covered with beautiful menus from local restaurants. It's striking and very attractive. What I have to add though is that she is also a meticulous housekeeper. She gets her little feather duster out every morning and goes over every inch of her nice displays.

I don't have a feather duster.

After divorcing John (for other reasons, not the plastic flowers on the wall), I decided to get rid of all of my home furnishings and replace everything with hard surface lucite cubes. (Yeah, lucite is a kind of plastic, are you beginning to see a trend?) My children were all in favor of this change. We had huge pillows on the floor and nothing but Jimi Hendrix posters on the walls. It was "interesting".

After seeing a magazine of a gorgeous "Arabian Nights" bedroom with billowing fabric covering the ceiling and walls, I decided I would do the same thing in my boudoir.

I really didn't know what to do with "fabric" so I improvised and used bedspreads printed in a floral pattern. Let me tell you, they were a bitch to get up on the ceiling. Oh, and the result? Uh, what you might expect. Dear God! What was she thinking?

Lest you think this was just youthful folly, it was not. Alex and I decided to purchase 2 "pretend" black leather recliners for our "family room" at hour old house. We also added a black weight bench, a treadmill, some floral posters and a television to the room. We thought it looked great, that is until the pretend leather started breaking and cracking. Again, what were we thinking? This "family room" was not in a hidden place, but in full view from the kitchen, the dining room, and the living room. It was scary ugly.

Over the past 10 years, I have learned to totally avoid home decorator magazines.
Posted by Linda Medrano at 12:48 PM No comments: