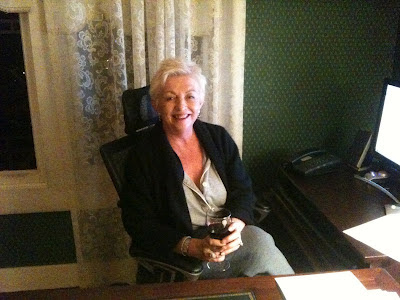 All I need is the mask.

I've recently had some back trouble. Actually, recently is loosely translated to the last 30 years of my life.

Once or twice a year, my back goes "out". Now, since I'm a person that looks for "solutions", I determined that the chair in my office was not giving me the kind of support I needed for my lower back.

I figured that a new chair was certainly in order. I began to lobby my husband (yeah, "nag" is synonymous with lobby) for a new chair.

We went over to Office Depot a couple of nights ago and I tried out their various chairs for support and comfort and determined the $200 "leather and mesh" chair would be the most comfortable for me. Last night, Alex pulled the box containing the chair out of the wagon and took it into the basement for assembly. It took quite a while. This concerned me a bit because Alex is not great at following directions. Actually, scratch that, Alex does not ever look at directions.

After about an hour, Alex came upstairs with my now assembled new chair. As he was rolling it into the office, I realized this is the ugliest fucking chair I have ever seen. It looks just like the chair that Hannibal Lecter was transported in. Of course, in "Silence of the Lambs", Hannibal also had a mask. When I expressed to Alex that this was a really seriously ugly chair, he said, 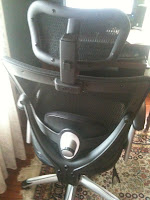 "Well, it does look like one that they would use for crazy people in straight jackets."

There is something very S&M about the metal phallic thing sticking out of the back side of the chair.

I hate it when I get what I want and it's not what I want.
Posted by Linda Medrano at 10:13 AM No comments: 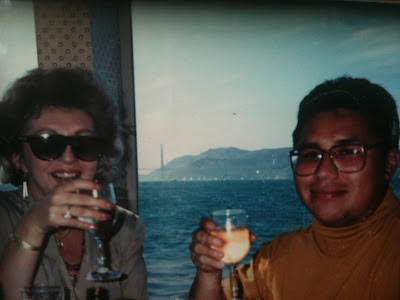 This photo was taken about a week after we got married in 1989. We were on a yacht watching the Navy ships come through the Golden Gate Bridge to kick off Fleet Week.

I was deathly afraid of water, but Alex was a sailor and wanted to greet the fleet even if he was not on a Navy ship coming into port.

See, I'm making a sacrifice here, even if it doesn't look like I'm suffering. With enough Chardonnay in me, my pain level goes down.

On February 18, this year, we got up in the morning like any other day. Since it was a Saturday, we had the day planned pretty fully. Saturdays is when we do grocery shopping, run to the cleaners, take the pups on adventures, and go out for lunch. It was early in the morning (well, about 9 AM), and I was at my computer sipping my first cup of coffee. I turned to put the coffee cup on the desk, and I sneezed. That sneeze would change my life for the foreseeable future. My low back did a "WHAP" and I was in agony. The pain was so intense I couldn't call for help, nor could I get up out of my chair. The spasms were very similar to the last stages of the back labor I had delivering my son. I was sweating, gasping for breathe, and in absolute agony.

Now this is not the first time this has happened. I have a couple of "protruding discs" in my low back that may cause this whap business to occur. The way this plays out is that either I go get a shot of morphine at the hospital or I tough it out. Since we have a $250 copay for an ER visit, that's not my first option. Generally, I have to lie flat on my back for the better part of a week, taking pain medication and muscle relaxants. Since our bedroom is on the upper floor, it also means I have to sleep in "Harry's apartment" on the main floor. Harry really doesn't mind.

Harry is a gentle giant at about 80 pounds of canine. He sleeps at the foot of the bed and doesn't really bother me. Zoe, our 50 pound pit bull puppy, is quite a bit smaller, but also much friskier. Zoe will leap into the air and land on my belly before she bounces off me and tries to encourage Harry to play. Zoe seems to find my shrieks of pain amusing.

The truth is, I don't feel particularly friendly toward anyone when I'm incapacitated with back pain. I lay flat on my back for hours, but sooner or later, I have to get up to go to the bathroom. The problem is, I can't get up. I try rocking from side to side to turn myself a bit. I think I must look something like a turtle who has landed on his shell. Both Zoe and Harry watch my efforts with ill-disguised amusement. Since I really can't walk, I sometimes just rock myself right off the bed and on to the floor. This little trick has various degrees of success. Yes, I get off the bed and on to the floor. The impact of hitting the floor sometimes makes it unnecessary to get to the toilet. Go figure!

After one full week in bed, on Saturday I was able to walk around a bit, and I showered and got dressed for the first time since the whap. Oh happy happy joy joy! Well, not really. I still had trouble walking for any length of time and getting in and out of a chair was still a bitch. Alex and I did take a little ride on Saturday early evening and had dinner at a local bistro. Two martinis made some of the discomfort go away. We had passed our local theater and Alex noted that the new movie "Act of Valor" was playing. The film is rather unique because it started as a "recruitment" film for Navy Seals. The people in the film are actual Navy Seals and not actors. Okay, I understand the appeal to Alex.

Alex began his campaign to see the movie right then. It was starting in 20 minutes. He could grab us a couple of tickets and we could watch it right then. Uh, no. That would not work. I was not sure I could sit in one position for 2 hours to watch a movie. I was already pretty played out from my day and dinner. Yesterday morning, Alex's campaign became more intense. "We can do this. We can do that. And we'll go see the movie at 2:15 in the afternoon."

Yes, I did. I gave in to my husband's pleas. I enjoyed the movie. And I barely minded that I couldn't get out of the chair after the show without grunting and squealing in pain. Alex was happy as a clam. (Are clams happy?)

I limped and stumbled to the car with Alex holding me up. He was babbling about the movie and grinning from ear to ear.

Sometimes I hate him too.
Posted by Linda Medrano at 7:38 AM No comments: