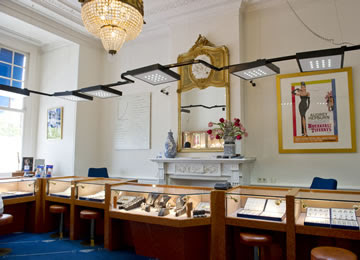 This is where I hope Alex goes tomorrow.

Alex and his friend Brian are driving to Amsterdam. This is the interior of Coster Diamonds, a very famous place in Amsterdam to buy jewelry. I'm sure he could find something really spectacular for me in this shop for our Anniversary on September 29th. Of course, he won't be home for the occasion, but he just might have something special he's bringing home as a late gift. That would be nice, right? 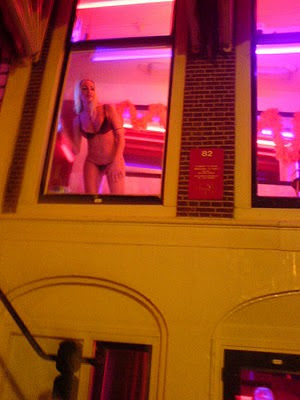 This is where I don't hope Alex goes to spend his time in Amsterdam. Oh I don't care if he walks past the windows because we all know there is nothing wrong with window shopping. The real problem is that if he goes to the Red Light District, he may end up buying me smaller diamonds because he's used his money unwisely. All right, the truth is I don't think celebrating your anniversary month with a prostitute is the least bit kosher either.

I do concede that spending a period of time with a lady of the evening might be cheaper than going to Coster Diamonds for a gift for your wife. But you have to think about the long term with these issues. You spend a half hour or so with Brunhilda, and that's fine. It might cost you $100 or so if you don't ask for anything "fancy". Let's face it, that's not a huge sum compared to $10,000 for a carat of superior diamond. But there's an old adage, you get what you pay for.

Now keep in mind that I am currently crotch sprung. Or maybe it's crotch sprained. No, I think they call it "I've sprained my groin", but then isn't your crotch and your groin sort of the same thing?

Now this sprain has me sort of lying low for a bit of time. I'm hopeful it will be gone by the time my husband comes home with my diamonds.

He knows with me it's always "fancy".
Posted by Linda Medrano at 3:31 PM No comments: 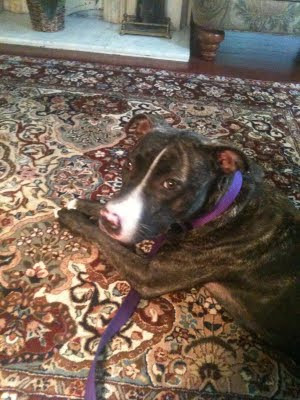 Call the men in the white coats.

I wasn't looking for love, or a new family member but there she was.

Traci, a friend and waitperson at a bistro I frequent in town, was telling me about Zoe, a rescue dog she was fostering. She and her partner would have to surrender the pup to the SPCA next weekend, and Tracy was sick about it. They were under contract with their landlord to not have a Pit Bull in their apartment. They could not keep Zoe.

Traci and her partner had taken Zoe with the idea that they would be giving her to friends of theirs within a couple of weeks, a couple who wanted her. The couple apparently has decided to get a divorce and they no longer wanted a dog.

As I listened to Tracy, I felt like crying. Here is this maybe 9-month old dog who would be put into the "system" and lose her sweetness and her innocence. Shelters are stressful places and Pit Bulls are a dime a dozen in the Bay Area.

Some punk might want to use her as a fighting dog, or as bait for a fighting dog. Or, she could be recruited by a big-bellied biker to guard his meth lab. This just wouldn't do at all.

I told Traci I wanted to meet Zoe. I was totally charmed when I met her. Zoe is very small (about 45 pounds), and very young. She is a loving and sweet girl who is already house-broken and crate trained.

Traci and I decided to introduce Zoe to Harry last evening. (Harry has been down in the dumps since Alex left on his month long trip.) We took both dogs on a walk to let them get acquainted and they did fine after some initial posturing.

We came back to the house and repaired to the garden where the dogs would be able to interact off-leash and they had a marvelous time. Zoe let Harry dominate her and she loved it when he chased her. They ran constantly for about 2 hours.

Although Harry is neutered (and Zoe is fixed too), he was very romantic toward her. Zoe seemed no worse off from his clumsy attentions. In return, he bathed her with drool and love nips until she was soaking wet from head to toe. Harry for sure thought this was a love connection, even if Zoe did play a little hard to get. 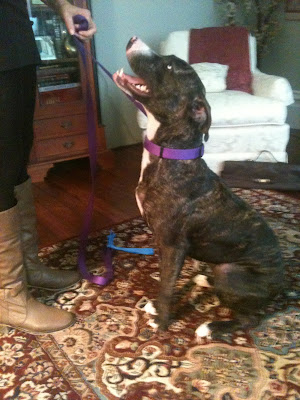 I need another dog like I need a hole in my head. But, good sense has never been high on my list of worthwhile qualities. I sent Zoe's story and her photos to Alex and he agreed that we might want to take her. (But then Alex has no more good sense than I do, and perhaps even less.)

This is not going to be easy, but we can do it. Honey will not like Zoe, but Honey doesn't even like Harry for that matter. Harry badly needs a playmate. Honey is more "prison warden" than "playmate". We'll adjust.

Zoe is just too young, sweet, and pretty to be turned into a gang banger's Pit Bull.
Posted by Linda Medrano at 12:59 PM No comments: