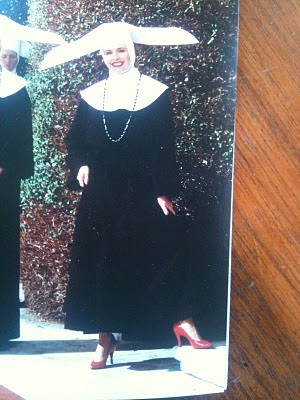 I thought about entering the convent.

No, seriously, I did. I prayed on it for at least a year. I listened very closely to see if I had "a calling". From the time I was 9 until I was about 12, I was ultra-religious.

I watched religious movies about saints and martyrs. I considered cutting my long hair very short so I could wear the headgear required to be a nun. The nuns at my school wore old fashioned habits and I loved those long black garments. I relished the idea of being a "Bride of Christ", but there was a catch.

There was no way I was giving up my high heel shoes. I got my first pair of heels for my 12th birthday. My dad took me shopping, and from mental exhaustion from listening to me plead, he finally let me buy a straight skirt and a pair of black pumps.

My mother was not pleased, but I certainly was. I still viewed myself as a candidate for the convent, but I had to find out about the shoe situation before I made a final commitment.

I talked to my spiritual counselor, a nun who was in her early 20's named Sister Geraldine. She wore black, flat heeled shoes that looked like they should be worn by a man. I explained to Sister Geraldine that I was almost certain I had a calling to become a nun, except I would not wear the kind of shoes she wore. I asked if the Church ever made exceptions for things like that.

Sister Geraldine told me that if I was so concerned with matters of vanity, perhaps I did not have a calling after all. While I found her remarks very disappointing, I certainly did not want to be a bride to anyone who would not share my appreciation for high heeled shoes.

The following year brought about several major changes. My family moved and I transferred to a public junior high school for the 8th grade. I turned 13 in January of that school session and I went to my first dance. (Yes, I wore my high heeled shoes.) A boy named Tyrone asked me to dance. He was tall and very thin. I really liked the way it felt to have a boy's arms around me, and I really liked being a little taller and more grown up in my high heels.

I went home and said a quick prayer telling Jesus I was sorry. I had changed my mind about being a bride of Christ.

And frankly, I've never looked back.
Posted by Linda Medrano at 3:51 PM No comments:

They Are Never To Big To Sit On My Lap 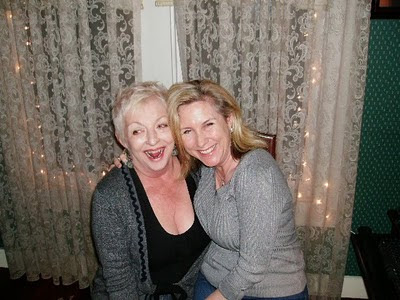 They are never too big to sit on your lap!

My daughter Sheila turned 40 last year. She's the mother of two beautiful children, the eldest is an 18 year old boy.

She's grown into a lovely woman. I don't know how this has happened so fast. (Her brother John is 3 years older than she.) I still dream of them as children, but now I mix them with my grandchildren in my dreams.

I remember my mother telling me that "children never grow up to a parent" and I think she meant that. When I was 50 years old, my mother would still refer to me as a "girl".

I never refer to my children as girls or boys. I feel that they are responsible adults and it would be wrong to think of them as "kids".

Maybe thinking of our children as "children" when they are grown is normal. I just don't feel that way. As an adult, I resented being called a "girl" by my mother. I felt she was saying that I was insignificant or immature. (It may have just been mom's way of feeling younger herself. I don't know.)

When my kids come to me with problems, I do everything I can to help them, except suggest solutions. I encourage them to work out their own solutions to issues. It's part of being an adult.

My own mother would bombard me with advice and her advice was more than a suggestion. Mom was quite forceful in her opinions of what I must do. I very seldom followed her instructions.

There is nothing I would refuse my children. But since they are no longer children, they have to make their own way in the world with the tools they have. They've done a very good job of it so far.

Your love for your children lasts forever, still they have to make their own way in life. I respect my children too much to doubt their decisions.
Posted by Linda Medrano at 5:05 PM No comments: