Gigolo's - Or How I Spend Time When Husband Travels 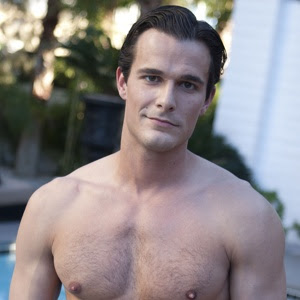 This guy is Jimmy.

Jimmy works as a professional "escort" in Las Vegas. He is one of the lead characters in a Showtime reality television series. The series follows five men who work as "gigolos" in Sin City.

Since I'm home alone, I started watching the show last night. (Well, of course I did. Don't judge.) I guess I was trying to see what other women were doing if they had husbands who traveled all the time. No, that's a lie. I just wanted to watch and see if these "escorts" were worth the money.

The men all looked a little "sleazy" to me. But then I think Las Vegas is sleazy too. It's not my favorite place. I'd rather go to Coalinga, California, for two weeks than to Las Vegas for two days.

There is something about these gigolo guys' hair that looks weird to me. (Too much gel-type product maybe.) I think they also all have fake tans. Now that's just wrong on so many levels.

I was channel surfing and when I ran into this show, I was fascinated. These guys are all attractive enough, if you like the type. That's part of the problem. I really don't like the type. I prefer men who aren't prettier than me when we wake up in the morning. And I don't prefer waxed men. I like them better as nature made them, even if that is hairy, lumpy and without hair gel.

Every one of these guys seemed a little pitiful. They all had failed relationships and they were quite good at "pretending" affection for their clients. That's not particularly appealing, in fact, it is sort of sad. Also, there is something sad about anyone who exchanges affection for money. (And it usually is more because they need to than because they want to.)

There was one lady who paid quite a bit more to fulfill her S&M fantasy. She put her gigolo's penis in a wire mesh cage for a couple of days. The dude went along with it because I guess the price was right. It just made me shudder.

Now, actually, that could be just because my fantasies have nothing to do with penises in wire mesh cages.

Posted by Linda Medrano at 5:33 PM No comments:

The Girl In A Cage 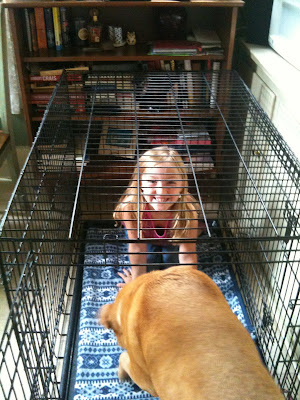 If someone entrusts their child to me, they can be certain that the child will be returned to them no worse for the wear.

I had a friend tell me once that walking with me and Alex and one of the grandkids, is like being with a secret service detail watching the President's kid. Kids are always close enough to be snatched back by one of us.

Abbey Rose is 7 years old. She is my son's third daughter and quite a lovely girl. My son and his wife took the three other children and left Abbey Rose with us yesterday morning for a few hours.

Both Alex and I needed to perform our ablutions and get ready for the day. I won't leave a small child alone or unattended at all so this presented a slight problem. Oh wait! Solution! The crate that we used for Harry!

We told Abbey Rose to get in the crate and stay there while we got ready. So Abbey wouldn't get lonely, Harry joined her. (Plus, if a robber, serial killer, kidnapper, or arsonist tried to break in the house they couldn't get Abbey Rose with Harry in there with her.) Both of my dogs, Harry and Honey adore Abbey Rose. They have known her since she was a baby.

When I came downstairs about 20 minutes later, both Abbey Rose and Harry were lying down in the crate watching "The Real Housewives of New Jersey" and eating waffles.

I told you I'm responsible.

Posted by Linda Medrano at 2:05 PM No comments: