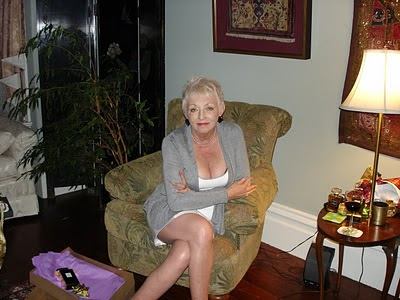 I wish all of you joy, shock and awe, secrets, surprises, and great health, love, and tranquility as your Christmas gifts.

I don't do Christmas exactly. I do the tree, the ornaments, and the exchange of gifts and that's great. But the real excuse for Christmas or any other day to me is to give, receive, and express love to those around me who have enriched my life.

There are too many of you to name personally, but I do feel such privilege and joy in getting to know each and every one of you.

Thank you all so much for reading things I have to say and making me feel like it was worthwhile that I wrote it! You are the best.
Posted by Linda Medrano at 11:12 PM No comments:

I was flying from San Francisco to New York via Chicago for a meeting.

I had a seat mate who was a very nice guy. He told me his name was Josh, (it was) and I told him my name was Lorraine (it wasn't). I was flying on to New York the next morning because I liked to break up flights to the East Coast.

Josh was flying on to Italy the next morning. We talked during the almost 5 hour flight and told each other some truths and some lies. I told him I was married. (I wasn't.) He told me he wasn't. (He was.) It really didn't matter to me.

We arrived in Chicago about 9:00 PM. We took a cab to the hotel where he had reservations. It was one night. And it was lovely. I awoke when the sun started to come up. I dressed and quietly left Josh sleeping peacefully. I went downstairs with my bag and got a cab back to O'Hare.

I thought about him for a long time after that night. He may have also thought about me.
Posted by Linda Medrano at 7:57 PM No comments: 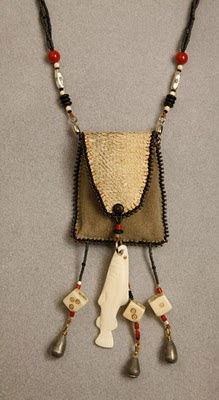 Mine won't look exactly like this one because I'm not artistic. Still, this is the perfect solution for the man, woman, or child who has everything.

I'm going to make the bags out of cloth, rather than rawhide. And I'm not adding jewels or decorations to them. The important thing is what I put inside them. I'm going to start with teeth, either human or animal. I can probably get some old cat teeth or dog teeth from my vet. My dentist might have some human teeth laying around that he would not be sorry to part with.

If this gets to be too difficult, I have Alex, the dogs, and the cat and a good pair of pliers.

Next I'm going to add some hair, human and animal. It just seems like a good fetish bag should have some hair in it. Nail clippings are good too. Cat nails clippings add a nice touch I think, but any old nail clippings will do.

I have some nice small rocks and I'm going to put a pretty little rock in the bags as well, and maybe some corn pollen. Sage is good too and I have a lot of it growing outside my house. I may toss in a clove or two for scent.

Now, some of my friends might wonder about my choice of a gift to them. But I figure if I act mysterious I can pull it off. Here is a rough idea of what my bags will look like. 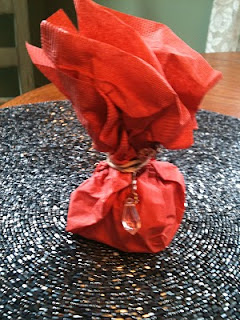 I will tell them to open the bags if they wish, or just tie them on a leather strip around their neck, wrist or belt.

Keep in mind, this is just what I had handy. I will use higher quality material for the actual bags. Still, I think the rubber band is a nice touch. Kind of homey, you know.

We have a new girl on the block. I've been seeing Madge's comments for a couple of weeks now and she has started her own blog. I love this woman and she's hysterical. Check her out!
Posted by Linda Medrano at 2:00 PM No comments: 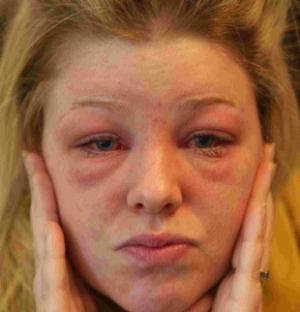 Okay, this poor unfortunate woman is not me.

But her eyes look very much like mine do today. I caught a nasty virus from my husband. Alex was home sick for 3 day last week.

He went around the whole house, coughing and sneezing and touching things with his germy hands. Efforts to quarantine Alex were futile. He moved from room to room and touched things no matter what I said.

(We have a very nice room that he could go to and stay when he is sick where he would be far away from me. Will he go there? Of course not.)

I awoke Sunday morning with a blaring headache and a cough and a runny nose and runny eyes. Really attractive, right? As the day progressed, I was feeling worse rather than better. Something tells me I caught my husband's crud.

We went to bed about 10. Because I could not lie down and breathe at the same time because of congestion, I decided to get up and stay up until I could no longer hold my eyes open. Then and only then would I take my chances of dying from not breathing after falling asleep. I also (considerately, I might add) decided to sleep in one of the downstairs bedrooms so as not to disturb Alex's beauty rest.

I had been dosing myself for hours with aspirin, sudafed, and cough syrup. (I never take those things but I was trying to get a leg up on this virus. I also drank about a quart of orange juice.) About 3 AM, I finally went into one of the bedrooms and found Harry, our 90 pound dog sleeping there. I figured, it was a cold night, so what the hell and climbed into bed with Harry.

When I woke up, I felt like I'd been run over by a truck. Even my hair hurt. I took more pills and grabbed my coffee. For the next two hours, I sat in a semi-coma and read emails and blogs. I finally thought perhaps bathing would not be a bad thing.

That's when it happened. I looked in the bathroom mirror. Oh dear God in heaven, what happened to my eyes? When I was a child, I had a pet frog. My frog got sick and his eyes swelled up just like mine looked this morning. Then he died.

Now, I'm not saying I'm going to die, but it looks to me like I have some kind of allergic reaction to aspirin? sudafed? cough medicine? orange juice? Harry?

It's not a look I really like.
Posted by Linda Medrano at 3:16 PM No comments: