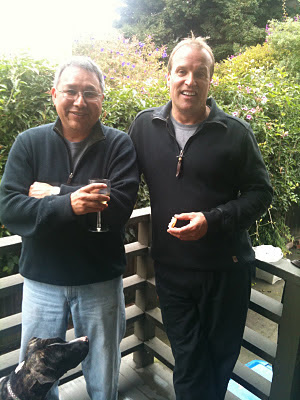 I spent Thanksgiving afternoon, cooking, sipping a lovely Chardonnay, and feasting my eyes on Alex and Todd.

There's just nothing like having cute men around. And these two are a study in contrasts. Alex is so brown and sturdy. Todd is so blond and rangy! For those of you who don't know, Alex is my husband, and Todd is my dog trainer (and friend).

The crusty sweet potato casserole turned out wonderful. So did the stuffing and mashed potatoes. The turkey (12-pound, Kosher and fresh), was maybe the best I've ever had. We had Brussels sprouts cooked with bacon and chicken broth, and cranberries with cherry chutney. Pumpkin cheesecake was for dessert. We also had a lovely dessert wine served in tiny (edible) chocolate cups.

I only screwed up one thing. I didn't make the pear and Gorgonzola salad with the walnuts as I had planned. It simply got away from me and I forgot. Never mind. We'll have that today.

One other tiny mishap was that I put the turkey "innards" in a pan of water, the neck, the heart and the other things called gizzards. I meant to cook those down to use for the gravy, but I forgot. So those nasty tidbits were sitting in a small saucepan in water on the counter.

We packed up "leftovers" for our guests and they took them home. Alex and I decided to watch a "Godfather" marathon upstairs and make it an early night. We were both tired and more than a little tipsy from all the wine.

Alex went into the kitchen as I was heading upstairs. I heard him yelling. We had placed the left over pumpkin cheesecake on a paper plate covered in Saran wrap on top of the kitchen island. Alex apparently walked in on Zoe as she was finishing off over half of a pumpkin cheesecake. She did this by standing up on her hind legs.

Early this morning, almost before dawn, I remembered that we had not taken our garbage cans out to the street. (We really needed to get them emptied because they were all quite full so I shook Alex awake and told him to get his butt up and take out the garbage.) Alex took quite a while so I rolled over and went back to sleep.

When Alex came back to bed, he asked me if I had put a clean and empty saucepan on the floor of the hallway. What a peculiar question! Why would I do such a thing?

The answer came to me a second later. Zoe! The turkey bits were gone. Zoe certainly knows how to have a feast. A pumpkin cheesecake and raw turkey innards. Well, turkey necks are probably delicious! I've never tried them myself.

Apparently Zoe went on to rearrange the furniture in Harry's apartment last night. All that sugar probably gave her amazing energy.

Alex is still cleaning up the recycled pumpkin cheesecake out in the backyard.
Posted by Linda Medrano at 9:55 AM No comments:

The Year I Made Turducken 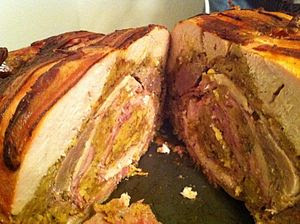 In retrospect, it looks kind of obscene.

I had read something about "turducken" either in a magazine or a book. It captured my imagination. Stuffing a chicken inside a duck, then sticking the duck inside a turkey just sounded like good fun to me.

In a fit of curious "social frenzy", I invited about 40 people for Thanksgiving that year. Most of them accepted and were very excited about the promise of the Cajun treat I would be preparing. Now, frankly, I'm not sure what I was thinking.

My husband was actively deployed with his unit to guard the airport in the dark days following 9/11 and he would be going on duty at midnight on Thanksgiving. My kids were all here with their kids and everybody was staying for the night.

All of the work that went into that poultry was enough to make me swear off of fowl for years. I'm not even that crazy about eggs to this day. It was disgusting to touch that naked bird flesh hour after hour. It was a terrible amount of work, but I got it done. I also prepared dressing, mashed potatoes, gravy, candied yams, and a green bean casserole to go with what I was now calling "Turd Uck Icken", sometimes prefaced with a "fricken".

I also belatedly realized that I really did not want to have 40 people or so come to my house to eat, but it was too late to cancel without the excuse of being hospitalized.

Family and friends were asked to bring wine and / or a pie. I really didn't care which. I set the table and it looked magical. Of course, the service was all "buffet" because I really can't seat 40 guests at a table.

I did not eat one bite that evening. People came and went and everyone seemed to enjoy the feast. I have no idea if it was good or not. People said it was, but they could have just been being polite.

Nobody died.
Posted by Linda Medrano at 2:05 PM No comments: