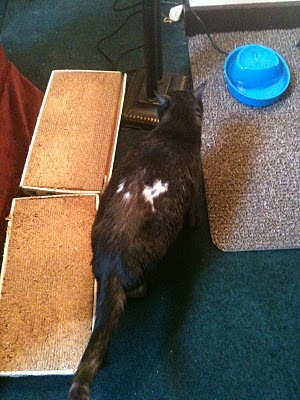 My cat Smokey is an old guy now, of about 15 years.

Unfortunately, he can no longer do as good a job grooming himself as he could in his youth.

While my husband and I brush him faithfully, we also sometimes have to use the manicuring scissors to cut a knot out of his fur.

Smoke is not crazy about having this done, but we really have no choice. We also have to trim Smokey's claws and he doesn't like that either. Smokey is not, nor has he ever been, a sweet kitty. In fact, he's something of a terrorist cat who scares the hell out of my two big dogs.

I told my spouse that Smokey had knots in his fur and we needed to clean them up after he got through clipping the the cat's nails. I walked out of the room for a few moments. When I got back upstairs carrying the manicure scissors, I found Alex had a pair of huge orange scissors in his hand and he had already cut out huge chunks of Smokey's black fur.

"What are you doing?" I screamed. Alex looked confused and said "You said you wanted to get rid of the knots." The poor cat now looks like the victim of some weird religious cult that mutilates cat's fur as a form of sacrifice.

I will never again allow Alex to do anything requiring scissors, or particularly good sense either.
Posted by Linda Medrano at 2:07 PM No comments: 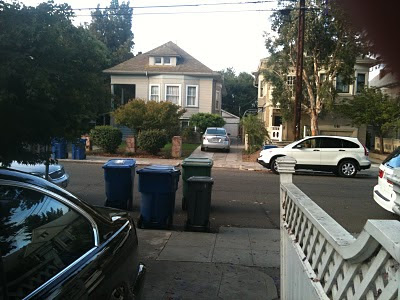 I hate Garbage Day. It bugs me because on Garbage Eve, I have to wrestle our garbage cans from the backyard out to the curb, past three cars parked haphazardly in our driveway.

It also bugs me that people wander the streets on Garbage Eve and early Garbage Morning pulling soda cans out of our recycle containers. I usually threaten to set the dogs on those people. I really don't want random people going through my garbage.

This morning I had a new reason to hate Garbage Day. My next door neighbor man came out early this morning and put his garbage cans directly in front of my garbage cans. I might also mention that he did this while wearing his underpants. Excuse me? I'm sitting here minding my own business and I hear noises in front of my house.

I glance out the window and here is a white haired guy in his skivvies putting his garbage cans directly in front of mine.

My dogs will always pee right on top of where the other dog peed. It's about marking and showing dominance. My garbage cans are placed at the curb right at the end of my driveway. Why did this guy put his garbage cans in front of my driveway? He has his own driveway.

And perhaps more perplexing than that is why did he do it wearing his underpants?
Posted by Linda Medrano at 8:14 AM No comments: 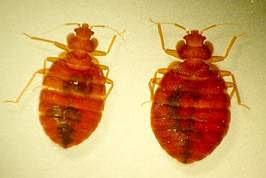 These guys do not make it easier for me to sleep.

Since I was a child, I've heard the rhyme "Good night, sleep tight, don't let the bedbugs bite". I always thought it was a silly bit of rhyming nonsense but had no idea there really were bedbugs.

I thought it was bad when my family's household had an infestation of fleas when I was about 10. Fleas are troublesome enough, but bedbugs being real just has me ready to wrap myself in saran wrap before attempting to sleep, (or give up on sleep completely for a year or two).

The idea that creepy crawlies would be in my bed just horrifies me. And the notion that Michael, Kerry and Gabe could have carried these bugs from Chicago to Colorado has me horrified. Chicago, I saw on the news, is one of the most bedbug infested towns, right up there with New York City.

Michael, Kerry and Gabe went to Chicago last week so that Gabe could play hockey. I can only assume they stayed in a hotel or motel during their stay since they flew in an airplane and that would not be conducive to carrying camping equipment with them. I can just see them resting their curly heads on pillows in some hotel or motel in Chicago. It makes me shudder for them.

Bedbugs apparently suck warm blood. I guess it could be worse as sucking cold blood is really nastier as we all know. I just wish it was as simple as head lice. While lice are certainly unpleasant, you can always burn your clothing and shampoo yourself head to toe with "Rid" and be rid of the critters.

When my son was about 4, I was bringing him home from pre-school on the bus and holding his little hand. My son gave me a note from the school saying they had a head lice infestation. I jerked my hand out of his, and told him to hold on to the rail. I also moved several inches away from him. Before arriving at our home, I went to a pharmacy and had an urgent conversation with the pharmacist. He gave me a bottle of "Rid". Once home, I stripped my son naked and wet him with a hose and poured the whole bottle of "Rid" on his little head and body. Yes, I burned his clothing and his shoes.

I do not know how you get rid of bedbugs. So Michael, although you know I have invited you and your family to come and visit me, I must now insist that you all bring sleeping bags and I'll put you up in the garden. Don't worry. It's a nice backyard.
Posted by Linda Medrano at 4:27 PM No comments: 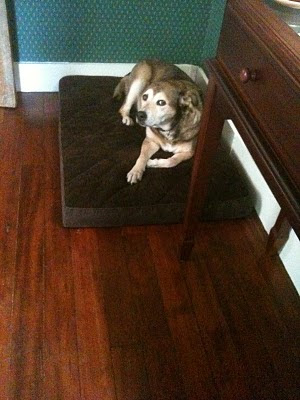 We got Harry (our big goldie orange dog) a new bed last weekend.

He ate his first bed. It was an expensive one too. Pity, really. Harry has "issues" and chews on things when he gets nervous.

Honey does not believe that anything belongs to Harry.

I have the same attitude that Honey does. I don't really believe anything belongs to my husband Alex. It's all mine. Oh I let him drive the silly cars to get back and forth to work. Of course I do. Somebody has to make money around here, and preferably, a lot of it.

Harry walked in the room, looked at Honey in his new bed, lowered his head and walked out of the room looking sad. I've seen Alex do the same thing when I've taken his new ipad for me. Hah!
Posted by Linda Medrano at 11:13 AM No comments:

Stepping Back From The Edge 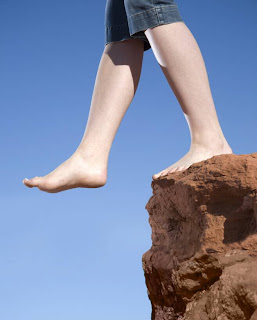 My palms sweat and I feel like I'm hyperventilating when I climb a ladder.

I've been known to get on the floor of a car as we go through the Big Sur area of California, begging the driver to let me walk so I won't be so terrified and sure my heart is going to explode from fear.

Roller coasters are not my friends.

So why do I push myself to go to the very edge of every cliff just to see what happens. I have to look over the side. Why? I really don't know.

I'm afraid but also attracted to what I'm most afraid of. Do I have a death wish? Maybe, but I think not. It's more about conquering what I fear the most.

The edge of the cliff is irresistible to me. I always walk to the edge just to prove I can. I do this with everything in my life, from relationships to financial decisions, to poker hands. I find clarity in the experience. And I find salvation when I can step back.

I think the experience of stepping to the edge of the cliff gives me the courage to know I can go on no matter how afraid I may be. I've been to the edge so many times.

But I've always stepped back in time.
Posted by Linda Medrano at 5:54 PM No comments: