A Love Story - And A Happy Tail 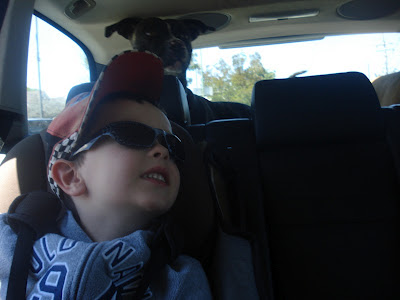 From the moment Zozo saw Max, she was captivated.

It may have had to do with his sharp clothes, stylish sunglasses, and side tilted ball cap.  (It didn't hurt that he spoke French either.)  Zoe was a goner.

In her extreme joy, Zoe whipped Max's legs a few times with her 16:" inch tail.  Zozo has something called "happy tail syndrome".  When she is happy, she yields the tail like a whip, sometimes causing herself to bleed from getting cuts on her tail when it hit furniture and walls.  The blood splatter and spray left the surrounding area looking like a mass murder had occurred in that location.

I too have sometimes suffered from "happy tail syndrome", but that's another post. 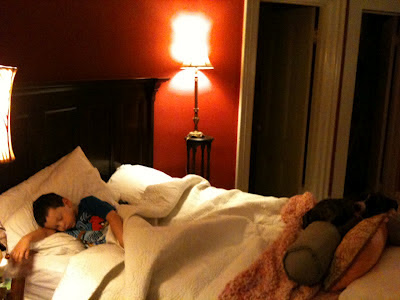 Max more or less misunderstood Zoe's devotion and screamed bloody murder upon being whacked repeatedly with that whip-like tail.  We got Max out of Zozo's reach and soothed his cries.  Zoe was very upset that the object of her affection screamed every time she got close to him.  When Zoe finally spotted Max asleep later that evening, she crept in to his room and up on his bed just to watch him with worshipful eyes.  She curled right in the corner of the bed and did not take her eyes off of Max for hours.

Zoe was discouraged.  All of her attentions seemed to frighten Max and make him move away from her.  She wanted so badly to lick him, to play with him, to sniff him.  Zozo even stopped wiggling really hard every time she saw him.  Sadly, it didn't help.  Understandably, Max wanted nothing to do with this dog with the whip-like tail.

My daughter Sheila; and my grand-daughter Arianna paid us a visit on Friday morning.  This visit totally changed Max's perspective of Zozo.  He laughed with real joy as Zoe kissed, smelled, rubbed against, and otherwise made a pest of herself with Sheila and Arianna.  When Sheila and Arianna petted Zoe, Zozo threw herself on the floor and stuck all 4 legs straight up in the air to encourage a tummy rub.  Max was finally convinced that Zozo was just trying to play with him all along and not trying to hurt him.

From that point forward, Max laughed at Zozo when she approached him.  He tossed balls and toys for her and let her lick him on the nose!

After Max left for home on Monday, Zozo climbed up on the bed and sniffed his pillow.  With a sigh, she put her head down and looked forlorn.  Zoe  looked everywhere for Max for days. Her tail ceased to wag at all.

Finally,yesterday, I showed Zoe a photo of Max on the computer.  Her tail swung back into action and she whacked me a good one right across the shin.

Zozo has her happy tail back, thank goodness!
Posted by Linda Medrano at 4:41 PM No comments:

Nude Is Not Lewd

No trip to San Francisco would be complete without a trip to the gay capital of the world, the Castro District!  I had told Nicky and Alex that people walk around naked in the Castro and they both thought I was teasing them.  (Actually, the California Supreme Court ruled that "nude is not lewd" and therefore legal, but one must carry a towel to sit on "for sanitary purposes.")

Nicky, Max, Alex and I drove across the Bay Bridge from Alameda and went to San Francisco's Chrissie Field in the Marina District for gorgeous views of the Golden Gate Bridge.  En route, darling Max dozed off and so I stayed in the car with him while Alex and Nicky ventured over to the base of the Bridge.

Alex took a couple of really great photos of Nicky with the Golden Gate as the backdrop.  It was a stunningly clear day so we had wonder view of Alcatraz and the Marin Headlands.  We oohed and ahhed at the windsurfers and enjoyed watching the children play in the freezing water.

We saw boats going by and ferries too.  Max woke up a little cranky so we hung out at the sea wall long enough for him to cheer up a bit.  I think he was a bit jet lagged.  Max calmed down considerably when we told him we would be taking a ferry boat the next day ourselves!

We drove through North Beach and Chinatown and Nicky and Max seemed to enjoy seeing  the crazy crowded street scenes.  We continued on to drive down Lombard Street, touted as "The Crookedest Street In The World".  To get there, we were driving straight  up the side of what seemed like an alpine mountain, and the trip down is like a roller coaster!  Really a gorgeous sight with the Pacific Ocean laid out in front of us.

Finally, we drove to the Castro District.  I had assured Nicky there were naked people walking around there.  At first we saw a wide range of characters, but nothing resembling a naked person.  We parked and looked for a place to get some liquid refreshments.  A bistro Alex and I had enjoyed in the past had closed, so we walked the length of the commercial section and "Voila" as Nicky and Max would say.  There was a man standing in the sun reading a newspaper completely starkers, nude, naked!  The sight made me and Nicky "clutch our pearls", but Max seemed not to notice at all.  After a couple of stunned seconds, Alex said "Wow!  He's really got an all over tan!"  Nicky and I agreed that he did and for a mad moment, discussed how we might take his photo, but we decided that would not be kosher.  We crossed the street and walked down to "Harvey's" for margaritas.  Nicky agreed these were the best margaritas ever!

We returned to the car to go home.  When we passed the corner where the naked man had been, we noticed there were a new bunch of nudie cuties standing around.  Nicky whipped out her camera and got one money shot that I know of.  She will have to choose to show it or not. 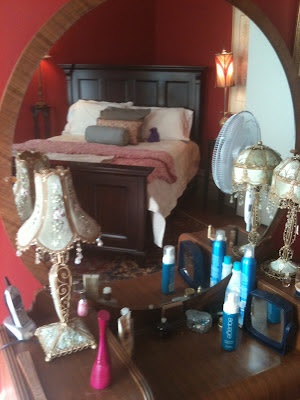 She was standing on the sidewalk in a pair of shorts and Alex recognized her and Max before I did.  (Of course, with legs like Nicky's, every man in the row of cars was hoping he recognized her!)

We brought our charges home and got them settled in.  Max was thrilled with the wide variety of toys and such that we had for him to play with.  Although he loved his power rangers, he actually went crazy for a plastic rifle (machine gun?) and a plastic pistol.  Max is all boy!  He was a little bit shy for the first hour but soon relaxed enough to begin enjoying himself.

The only down side was that Zoe saw Max as the perfect playmate and would not leave him alone despite the fact that he screamed when she walked in the room.

A day or two later they were the best of friends and Max even allowed her to kiss him on the nose.  Still, I think Max preferred the rather sedate Harry who primarily sniffed him and found him acceptable and moved on.

Alex went out after something and came home with a bottle of Silver Oak Cabernet.  (He was showing off for Nicky as this is the most extravagant he ever gets.)  Actually I love her so much it was hard to keep from drooling when I looked at her.

Photos do not do Nicky justice in the first place.  She is tiny.  She has the most amazing eyes I have ever seen, the most perfect body ever created, and the prettiest lips you can even imagine.  Add to that her charm and sweetness and you get a small idea of how lovely and perfect a young woman can be.  Alex was totally in her thrall as well..  Not to sell Max short, he has his mother's beautiful lips, his handsome daddy's gorgeous face, and a personality that is well, just so French!  He made my heart sing!

We dined in the first night on chicken, rice and spinach.  Simple food but filling.  Before dinner, we also shared some magnificent cheese that Nicky brought with her and some petite agor that we had gotten before she arrived.  We drank some lovely wines and everyone went to bed relatively every since it had been a big day!

Considering that I already loved Nicky from knowing her the last 3 years, there were no surprises.  She was exactly how I knew she would be.  Perfect?  Yes.
Posted by Linda Medrano at 5:34 PM 1 comment:

This Is Why I've Been MIA


Yes, that really is the gorgeous and delightful Nicky of We Work For Cheese.  No, that is not my house.

Nicky and I have gone to San Francisco shopping and sightseeing.

We have been to beach at  Chrissie Field right next to the Golden Gate Bridge.

We have gone to a swank supper club in Oakland and had lunch at the beautiful Rotunda Restaurant in Neiman Marcus San Francisco.

We went to the Castro District and saw naked people (yes, totally naked) out basking in the sun.

We were joined on Friday by Jayne of In Jayne's World and Margaret of Nanny Goats in Panties and had a slumber party that lasted into the wee hours.

We all had lunch at an authentic German Beer Garden after walking around the annual Alameda Art and Wine Fesival with Nicky and her handsome, adorable and brilliant 4 year old son, Max.

I'm going into detail with all the ups and downs, but not tonight as Nicky and Max leave very early in the morning and we need to get them packed up and ready to go.

Regular posting will begin tomorrow.  If I can get out of bed after all the adventures, that is.
Posted by Linda Medrano at 9:51 PM No comments: