The Church People Next Door 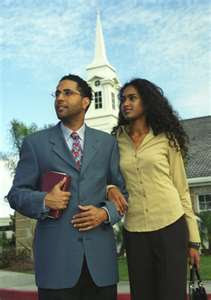 They moved in next door when my kids were young.

I was renting an apartment in the Richmond District of San Francisco.  I saw my new neighbors the weekend they moved in.

They were both young, attractive, and moving to San Francisco from Memphis.  They seemed very nice.  I spoke with them while they were moving in and gave them some ice water.  My kids were happy to meet the new neighbors who seemed like a very nice young couple.

I found out from our landlord that the man was a minister at a local Baptist church and his wife taught at a local elementary school.  Charming people, the landlord assured me.

About a week after they moved in, I invited them both over for a cup of coffee (to be neighborly, you understand).

My kids were home because it was Saturday.  Sheila was about 3 and her brother was about 6.  The new neighbors and I  sat and had coffee and cookies and talked about the man's church and the woman's school position.  The kids wandered around the apartment playing while we chatted.

The kids were in my bedroom, and I wondered what they were up to, but I didn't interrupt to go check on them.  The minister and I were discussing his church and he asked me if the children and I attended services.  I answered him honestly that we did go to different churches almost every weekend, but that I was not really a member of any congregation.

Conversation came to an abrupt and absolute halt.  I tried my hardest to contain myself, but laughter started up and I couldn't hold it in.  I spluttered coffee all down the front of my blouse.  The harder I tried to stop laughing, the harder I laughed.  When I saw the church people's eyes trying to act like they didn't notice anything amiss, I nearly fell off my chair.  We bid each other a quick farewell, and I collapsed again in horror, humiliation and laughter.

I never went to my neighbor's church.  I never invited them for coffee again. I think they were both glad that I didn't.

Frankly, I was glad when they moved about 6 months later and I no longer had to hide when I saw them coming or going.
Posted by Linda Medrano at 4:12 PM No comments: