The Lady With The Crack Ho Hair 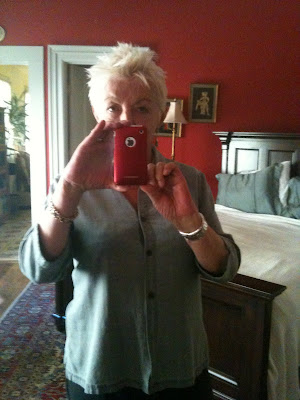 First of all, I'm not wearing pajamas.

My husband is leaving me for more than a month. Because I'm not going to get dressed or comb my hair, or even leave the house the entire time he's gone, I thought I'd get started with the hair right now.

Alex will be on the other side of the world. I don't want him to get homesick and be missing me too much. So I thought I'd give him reason to be glad he's looking at nicely turned out foreign women rather than his wife with the crack ho hair.

I'm also wearing sort of an ugly "outfit" on purpose. I have cute outfits, but I'm not going to wear them before he leaves. See this way, he can go to my blog and not feel very sorry that he's away from his pitiful wife in the tacky polyester clothes with the crack ho hair.

He will probably go to nudie bars in foreign countries and drink beer. I don't care. Alex may even join good looking foreign women for drinks or even meals. See I'm not the jealous type. I don't care.

I'm not cooking another meal before he leaves either. I don't want him missing my home cooking. This will undoubtedly piss Alex off a little but I don't care. It's for his own good. He won't be thinking of that wonderful Marsala with the noodles. He won't be missing my Vietnamese pork chops with the jasmine rice and shredded carrot and apple salad. He won't be missing the homemade raviolis. He'll be very happy with the meals he gets at the 5 star restaurants he frequents. I don't care.

I'm always thinking of Alex's well being. Now is that a good wife or what!

Posted by Linda Medrano at 3:34 PM No comments: 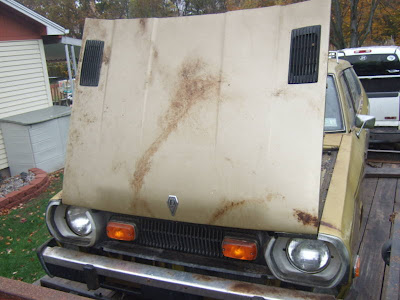 My husband Alex loves a bargain.

Well, I do too for that matter. When I find some Coach pumps at 35% off, I jump on them.

Where Alex and I differ is in our determination of what constitutes a bargain.

A number of years ago, Alex had a friend who was moving out of the area. He wanted to sell his 1978 Datsun for the ridiculously low price of $500. I asked Alex how many miles it had on it and he said about 200,000. Wow! That's a lot of miles.

Yeah, it is, Alex agreed. But his "friend" had assured him that the car "ran great". I asked what color it was and Alex replied, "Pale yellow. It needs a little body work though." Uh huh. So I remarked "Alex, it sounds like a hooptie."

Alex scoffed and told me I was just being stuck up. At the time, he had a new Mazda Miata and he needed a bigger car for some things. Arguing with my husband after he's made up his mind about something is fruitless, so I went and poured myself a morning Bloody Mary.

Alex called his friend and said, "I'll buy it!" and his friend drove the car over to our house. When I looked outside, I could hardly believe my eyes. This was the ugliest, most foul, and stupidest looking car I had ever seen. Alex paid his friend for the car, got the pink slip and drove his friend back home, asking me if I wanted to "test it out" with him. I shook my head no and waved him goodbye and poured another Bloody Mary. (Don't be so judgmental. It was close to noon by then.)

When Alex got back, he mentioned that the car had a couple of little things he would have to fix but assured me it's really a great little car! I asked if the rust would be easy to fix and he grinned and said "Not a problem!". I said I'd rather be caught dead than to be caught riding in that piece of shit car. Alex started pouting and saying that I'd change my mind after I took a ride in it.

Alex still grinning got in the car and took a look at my face and said "What?" I asked him if he had noticed that the car smelled. Alex assured me that he would wash it and "clean it up" when we got home.

Alex gave the chicken car to charity about 3 weeks later. Some bargain!

Posted by Linda Medrano at 2:08 PM No comments: