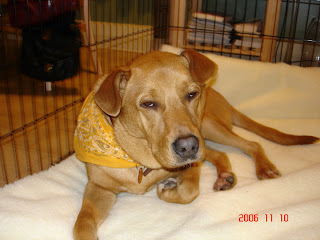 This picher is of me when I was almost asleep. I look funny, don't I?

Mom threw her back out today so I had to remind her it was hump day. Jeeze! I know she throws balls out for me and Honey sometimes, but I didn't see her throw her back anyplace.

Yesterday something really strange happened. I was in the kitchen (because I really love the kitchen) and I walked place the stove. The most amazing thing I ever saw happened. There was a big orange dog right in the oven. I growled at him and he growled right back at me. I showed him my teeth and he showed me his teeth right back. I barked as loud and scary as I could and he did the same thing to me. Mom kept yelling at me to be quiet, but I guess she didn't know there was a guy in the oven. Anyway, then I got tired and went to my apartment to take a nap.

Next time I looked, that guy in the oven was gone. I don't know where he went though.

Another thing that was funny is when me and Honey went to the Park with Dad, Honey just walked off real fast. I didn't know where she was going so I watched her. Honey hardly ever runs because she has the arth right us. Anyway, she's almost running so then I see it. There is a squirrel right in front of her who is watching her and shaking his tale laughing because he thinks that slow dog can't get him.

So I jerked the leash out of Dad's hands and I went after him. I almost caught him too but he ran up a tree and I could only get halfway up the tree before I fell back down. Honey was glad I showed him up though.

I had a hot dog this morning for breakfast. It was the coolest breakfast ever. And I have to go have shots this week. Not so good.
Posted by Linda Medrano at 7:07 PM