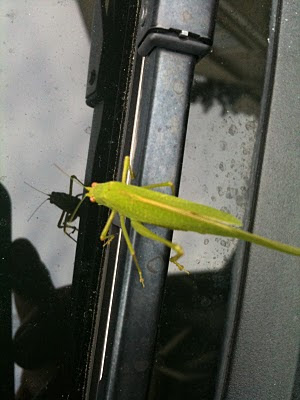 Looking out the windshield, we saw what looked like a leaf on the glass.

We were at a stop light and the light turned green about the time the "leaf" climbed up a little higher and grabbed on to the wiper blade. Since we were getting on to the freeway, stopping was not an option.

I saw a pair of bulging red eyes looking directly at me and I said "Oh my God, Alex! Look!" Thinking it was a leaf, Alex reached for the wiper blades and I screamed "No!".

We were going about 70 miles per hour on the freeway and pulling over was not an option, nor was slowing down much. The critter held on for dear life. I was imploring that Alex "do something" but there really was nothing to be done. We continued on down about 5 miles to our turn-off, and got off the freeway.

At least now we were going at a much more reasonable rate of speed for some poor critter holding on to the windshield wiper. I insisted that Alex pull over. We really couldn't expect this guy to hold on much longer. (If he had been blown off, he would have probably gotten hit by a car!)

We pulled over and Alex found a paper cup and got the critter into it. We named him James and he rode in the cup with me holding it all the way home. James was looking up at me in relief.

We got home and placed James on the hood of the car. He stayed there for a couple of hours because I kept checking on him. In the morning when I went to see if James was still there, he was gone. I hope he's okay. I think he was a cricket, but how would I know!
Posted by Linda Medrano at 3:59 PM