Is That A Gun In Your Pocket, Or Are You Just Glad To See Me? 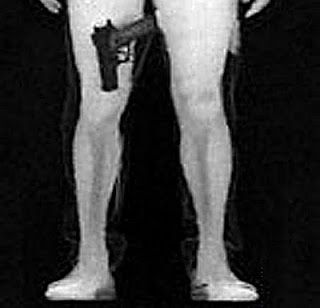 This is what shows on a TSA screening x-ray.

I don't think I want an x-ray like that. Oh, I think it's probably not that intrusive, but I still don't like being exposed to any radiation as I doubt it's good for me.

I don't like being hijacked or killed either, so I'm not knocking the use of extreme measures. Still, I'd rather be patted down.

I've been patted down by a female police officer while assuming "the position" on the hood of a car. It really wasn't that traumatic in itself. The part that was a little traumatic was being on the side of the freeway when it happened.

Short story. Guy I was carpooling with was black. We were in an area where Driving While Black is suspect. Got pulled over for expired tags. The car was impounded. We were both searched for contraband and weapons, but the Highway Patrolman who pulled us over had to call for a female cop to pat me down. It was a queer experience actually.

My husband had been deployed for a year to the Middle East at the start of the Iraq War. I was not in the mood to put up with this kind of nonsense. Eventually, after filing a formal complaint, I got an apology. Well, no harm, no foul.

Still, being patted down in private would be okay with me, particularly if she's cute. But, on the side of the road, not so much.
Posted by Linda Medrano at 12:46 PM