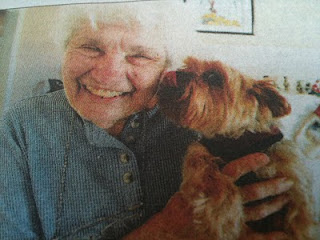 Helen is 80 years old. On October 30, she was walking her dog, a six-year old, six pound Yorkie named Deuce, at two in the afternoon near her home in Alameda.

Two young men approached her and one simulated having a gun. They grabbed her purse, and then to add insult to injury, they grabbed her dog. Helen had been quiet until they grabbed Deuce and then she started screaming "Don't take my dog!" Her hand was cut trying to hold on to his leash.

Neighbors heard her cries and ran out and chased the two purse and dog snatchers to their car about a block away. The thieves escaped, but one bystander did get the make and model of the car along with the license plate number.

One of the perpetrators was caught the next day. He said he had let the dog out in a park in the City of Stockton, about 40 miles away. The other thief has not yet been caught yet.

Alameda is an island community and relatively small with a population of about 70,000. We have an unusually large police force though. And we have very little crime. This incident was publicized all over Northern California.

On Tuesday, November 9th, a woman in Stockton was approached by a homeless couple and offered a beautiful little Yorkshire Terrier for $20. She gave the couple a $20 and took the dog home. That night on the local news, she saw the story of Helen and Deuce and put two and two together. She called the police.

Deuce had fortunately been "chipped" and was positively identified as the kidnapped dog. He was returned to his owner and his home the next day. Alex and I both had tears in our eyes when we saw Helen and Deuce on television last evening being interviewed. Helen's relief and joy were so touching. And Deuce looked very happy to be back with his person.

I saw a white haired lady at the shopping center today with a Yorkie. I ran after her and asked her pup's name. It was Deuce. I hugged her and said how glad we are all that he is back home. She was smiling from ear to ear. I petted Deuce and he was smiling too.

When you are older, your dogs become like your kids. I am so relieved this lovely woman got her best friend back. I told her I had two dogs, and don't know what I would do if one of them was taken. 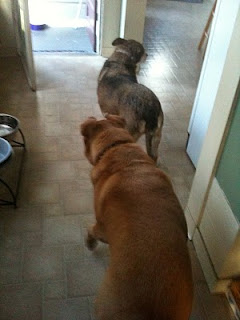 I didn't add that this would be most unlikely. They are both big dogs and only friendly if I tell them to be friendly. They are both very well trained with hand signals. They even know how to show their teeth on command.