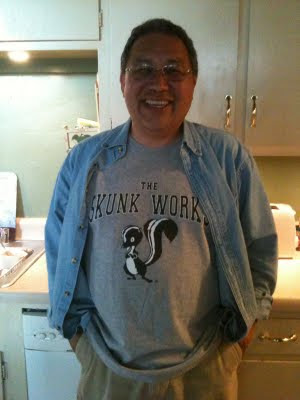 My husband Alex has been on a business trip.

As a matter of course, some of his trips, including this one, involve time at military bases. I'm not always sure where Alex is, and I frequently don't have any idea what he's doing.

Alex came home this evening. He was telling me about going to an honor bar at the base and picking up a bunch of candy, nuts, chips and such for the troops he works with. There was a sign over the honor bar that said "Remember the 8th Commander" and Alex was cool with that. He wasn't sure who the 8th Commander was, but that's not the point.

He put his money in the cash box and took the stuff into the guys and ladies and said "Here you go!" Everybody appreciates some free snacks when they are working hard.

Alex is Navajo Indian, a veteran of 25 years military service, and a very hard working guy! He understands all too well what the military people are up against.

Today, Alex went in and got a candy bar for himself, and picked up a handful of snacks for the troops and took another look at the sign. All at once he realized it said "Remember the 8th Commandment!"

His reaction was "Mutha Fucker! What do you mean? You stole my country and my land! Fuck you, Mutha Fucka!" Alex grabbed up big handfuls of candy bars, chips and nuts and took them into the troops. Did he leave money in the box? Oh hell no!

Alex was at a "defense contractor" location inside a military base. No troop will be responsible for the loss of candy, but an in the workplace, Ten Commandment quoting defense contractor might.
Posted by Linda Medrano at 7:27 PM