My Name is Honey - Redux 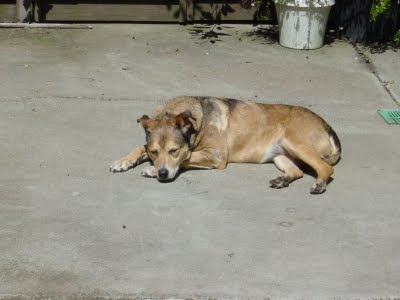 I knew when I was born that I was one of those dangerous females. I took no shit from anybody from the time I was 4 months old. I spent a lot of time on the streets and that changes you. Dad was a no-count Pit Bull from Oakland. He only stuck around long enough to get mom pregnant. Mom was a German Shepherd from the Oakland Hills and very nurturing. She did right by me and my brother. I think we were her first litter.

One day, we woke up and there was a man chasing mom down the street. He had a truck with him and grabbed her and stuck her in a cage-like place. My brother and I were left alone at that point. We never saw our mother again. We stuck together for a while. We found the Oakland restaurants that put out garbage and we looked through every evening to see what we could find. Chicken bones, pork, beef, even chicken feet all were on the menu if we went to Chinatown. It was great. We slept under the overpass when it was raining. There were a lot of people sleeping out there. Some of them were really nice and let us get close. It helped on cold nights.

This young guy in an SUV pulled up to the curb when he saw me. He held out something that smelled delicious and I went up close to see what it was. He grabbed me and put me in the back of his SUV. We drove for a while and I got completely confused. I was in an area I had never seen before. He took me through an alley and into a place that had a bunch of wired cages. He put a collar on me and shoved me into one of them. I was worried about my brother, but there was nothing I could do about that. There was water in my cage but no food. I was hungry and wondered where and when my next meal would show up. I found it out would be a couple of days before I would eat again.

There were a lot of other dogs out in this yard. Some looked torn up with scars and bloody faces. I realized to survive, I had to grow up and get hard fast. The first day someone brought a bowl of kibble to my cage, I snarled at the guy and gave him my hardest look. He backed away respectfully. I was learning a survival skill. Some fool left my cage unlocked and I ran off as fast as I could. I spent another couple of years as a homeless dog. I was picked up as a stray (or vagrant) and taken to a shelter. This was bad and good. I was used to cages but that was the bad part. But I did get regular food and water; that was the good part. People wandered through and looked at me and said, "Damn! That's a scary looking dog!" and walked on to the cages with the little fluffy guys. Who gives a shit? I was getting fed. It was okay.

A couple came and said, "We'll take that one" about me after a couple of months. The shelter people did an operation on me before I went home with these people so I couldn't have puppies. It's just as well. I didn't want puppies. We got into the car and we drove to a place called Hercules. I was put out in the backyard and I was fine. I stayed outside all of the time. I was "security" the man said. They fed me once a day and gave me water. Still, I felt like something was missing in my life. These people never even gave me a name. They called me "the dog". Still, it was okay.

After some time had passed, I noticed that I had waited a long time for some food. Nobody came. The people had moved. A guy in a uniform came to the back gate and whistled. I went over to see him. He put a leash on me and took me to a waiting truck taking me to the Oakland SPCA. Here we go with the cages again. But things were a little different this time. I had a warm place to sleep, plenty of food, and a person came almost every day to take me for a walk. I stayed at this place for almost 5 months.

One day a lady walked up to my "kennel". She looked at me and I looked at her and something happened. We just knew each other immediately. She called a man over and said, "Oh my God! This is the one we want! She's beautiful and I must have her!" The man said, "Uh, that's a pit bull" and the woman said "Don't be ridiculous; she's a German Shepherd". They got someone who worked there to take us into the "get acquainted" room. They both seemed just fine, but who really knows! I let them pet me and showed them that I had a few manners and that seemed just fine.

Two days later, they came back with a new collar and leash for me and told me I was going "home". They put me in the back seat of a car and we drove for a few minutes. When we got to their house, the lady said "This is your house, Honey". Okay, my name was "Honey" now. Not dog, not Fern (as I was called at the shelter" but Honey!) I liked it. We took a long walk and I marked every place I could so I could always find my way "home".

I was given a bath (not so great) and given flea medication, and taken to a "vet". The vet told these people that I had bad arthritis problems that was causing me to limp and move with some pain. My people said, "What can we do to fix it?". I was given medicine and taken to a specialist for something called an MRI. My people were told that there really wasn't much that could be done except to keep me "comfortable". The pills helped a lot. Also, the lady (who I now call Mom) hired an acupuncturist to stick needles in me to try and make me better. It was okay. The needles didn't hurt. (But I did look funny with about 100 needles sticking out of me.)

Six years have passed. I have changed in so many ways. I am well fed, I am well groomed, and I am well loved. I only eat organic food that Mom cooks for me. If I can't walk, they carry me. I live indoors and only go outside when I want to. I have a brother named Harry and I can bite and growl at him any time I want. Life is better than before. Mom worries about losing me. I worry more about losing her.
Posted by Linda Medrano at 10:10 PM