Protective Custody With A Lazy Guard 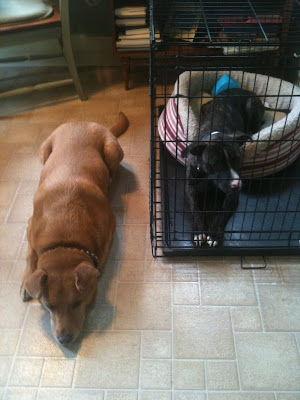 We got a new dog named Zoe.

She's a puppy and probably a pit bull, but she doesn't know what a pit bull is. Zoe just likes everybody. She may change later, but Zoe is really sweet right now.

She is so sweet in fact that she wants to be friends with Honey. Zoe wiggles and runs to her every chance she gets! Zoe play bows and shows Honey her belly. Honey shows Zoe her teeth but she's not smiling.

It's nothing personal. Honey isn't even that crazy about Harry and she's lived with him for about 4 years now. Honey is old and cranky and has arthritis in her hips. She's in a bad mood a lot of times. I can relate.

This will all work out. It's just stressful until it does. It helps that I'm having Todd, (the poor woman's Cesar Milan), come and work with us this week. Todd is a canine behaviorist and a trainer. He's funny and I like him a lot from our emails and telephone conversations. He has a website where I found him at "Your K9 Guy" Cool, huh?

In the meantime, I'm keeping Honey and Zoe away from each other. Zoe is spending time in the backyard and in Harry's closed off apartment. Honey is plotting her demise.

Anyway, until it is worked out, Zoe has to spend a little time in protective custody with Harry on guard duty.
Posted by Linda Medrano at 9:54 AM