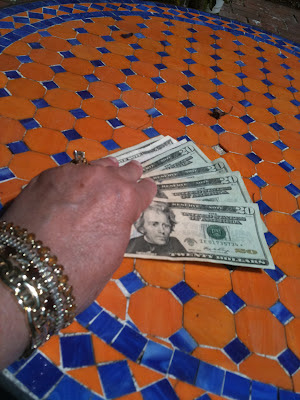 Now not all of you may know this.

I didn't know it myself until a couple of years ago.  As a married woman, when your husband goes to use an ATM machine, and you are with him, he is supposed to give you "Wife Money".

This needs to happen at least every two weeks.  It's only fair.  "Wife Money" is not your household expense money.  That goes on the American Express charge card that is paid in full every month.  "Wife Money" is different.  It is your money for being a wife.

I wish somebody had sat me down and told me about "Wife Money" when I was a young bride of 19, (and every other time I was a bride as well).  I never really thought about it very much until about two years ago.  It's a standing joke in Alex's family to say "Where's my Indian money?".  Since the Navajo Nation now has casinos, they are entitled to proceeds from the gaming.  Alex does not really want to take "Indian money" because a lot of Navajos need it a lot worse than he does.  Still, every time I'm around Alex's family, everybody jokes about their "Indian money".

I was waiting in the car when Alex went to the ATM to get some cash.  When he came back to the car, I held my hand out and said "Where's my "Wife Money"?  He laughed and started the car and I reached over and turned off the key.  He said "What?" and I responded that I wanted my "Wife Money".  Alex pulled out his wallet and pulled out a $20 and handed it to me.  "Oh hell no!"  That was not going to work!  I took the wallet and saw that he had pulled out $300.  I took a total of $140 out and put it in my purse.  Alex laughed and asked me what brought this on.

I told Alex that I had been listening to him and his family talking about "Indian Money" and I thought to myself, "Self!  Why are they entitled to "Indian Money"?  Oh, because they are Indians!  I see.  That makes perfect sense.  If you take that one step further, that means I am entitled to "Wife Money" because I am a wife!

Why it took me so long to figure this out I can't begin to tell you.  All I can say is I don't know how I ever managed without my "Wife Money!"

Now, if I could just get my grown kids to kick down with some "Mom Money", I'd be rolling in dough!
Posted by Linda Medrano at 3:36 PM