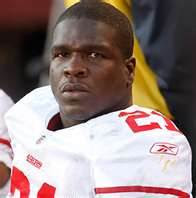 SF 49er Running Back, Frank Gore, follows me on Twitter.

I only say this because it's true.  Okay, I really don't know what "Twitter" is all about.  And never mind that I am not a huge football fan.  (Okay, I used to be, but that was back in the Joe Montana, Steve Young era, not now.)

Still, I am happy to see that Frank has the good taste to follow me.  The thing is, this has caused great agitation between me and my husband Alex.

Alex is really jealous.  He is a die-hard 49er fan.  He adores Frank Gore.  Alex watches every play of every game and totally loves the game.  (I'm a baseball girl myself.)  Every time Gore makes a great play, I simply call out to Alex.  "Honey!  Frank Gore follows me on Twitter!"

Alex tries (and fails) to be very casual over this.  He is seething with jealousy!  I have tried to assure him that it must be some kind of a fluke.  Maybe there are two Frank Gores?  Maybe it's not really THE Frank Gore?  (It is.)  Well, who knows!  I am sort of cute.

I like Frank just fine.  But I'm not really that much of a football fan, and I have now idea why he follows me on Twitter.  But I might venture a guess or two if pressed.

But I won't do that here.  Let's just say, "Honey, Frank Gore follows me on Twitter" and be done with it!
Posted by Linda Medrano at 6:24 PM